Winning sponsors may be tough sell 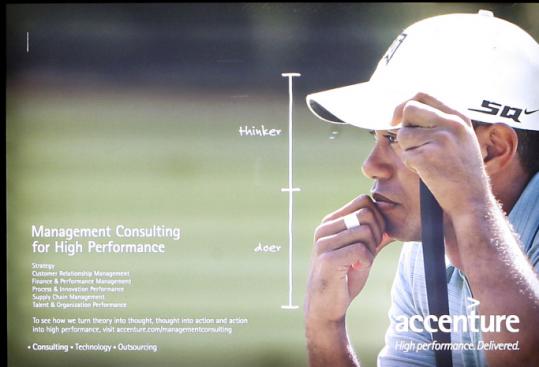 Tiger Woods’s public apology yesterday may go a long way toward mending his relationship with family and fans, but it’s not likely to win back sponsors right away, say some Boston media and sports analysts.

Basketball star Kobe Bryant and baseball player Alex Rodriguez had their share of personal struggles unfold publicly, but they continued excelling in their given sport. Missing in Woods’s apology during yesterday’s press conference was the date of his return to golf and that, analysts say, is a key element in rebuilding his image.

“He built his brand of performance on the golf course,’’ said Stephen A. Greyser, a Harvard Business School professor who studies brand marketing and sports management. “The only chance he has to rebuild it will be on the golf course.’’

Still, Woods may be moving in the right direction by admitting his flaws, media observers say. “He is sending a strong message that he is getting his life back in order and once that is done, golf will follow,’’ said Geoff Klapisch, an advertising professor at Boston University.

Gillette, which cast Woods in 2007 as the centerpiece of its ad campaign “Global Champions,’’ said that it will continue to limit Woods’s role in its marketing. Gillette was the first major sponsor to distance itself from Woods in December after he acknowledged that he had extramarital affairs and that he was taking a break from golf to focus on his family.

But the Boston personal care products company has not severed all ties and Woods remains part of Gillette’s roster of pitchmen. “We have not made any changes to our advertising plans,’’ said Mike Norton, a spokesman for Gillette, a unit of Procter & Gamble Co.

During the press conference, Woods singled out Accenture, the global management consulting firm and one of his biggest sponsors for six years until the company dropped him in December. The press conference took place during Accenture’s Match Play Tournament in Tucson, the first big golf tournament of the year.

Last month, Accenture replaced Woods in its ads with animals such as elephants to convey a high-performance message. An Accenture spokesman said the company is not currently considering Woods for future campaigns.

“He was a very effective representative for us in our advertising and the perfect metaphor for high-performance delivered,’’ said Fred Hawrysh, a spokesman for Accenture.

“As things happened late last year, what we found was that the advertising was no longer effective.’’

Woods also lost another mega endorser, AT&T Inc., which ended its relationship with him last month. But several sponsors have stood by him, including Nike and video game company EA Sports.

“He remains one of the greatest athletes in history, and as a longstanding partner, we look forward to seeing Tiger back on the golf course when the time is right for him and his family,’’ said EA Sports president Peter Moore in an e-mail.

It may be too early to tell what effect Woods’s remarks yesterday may have on his future market value.

One study, released by market research company NPD Group Inc. on Thursday before the public apology, found that most consumers interviewed between Dec. 16 and Jan. 5, said they wouldn’t change their buying habits toward products that Woods endorses because of his personal issues.

Woods’s Q Score, which represents a celebrity’s likeability among US consumers, is expected to drop from a 28 to a 20 or even lower, said Henry Schafer, vice president of Marketing Evaluations Inc., which conducts the ratings. On average, a sports celebrity has a 15 rating.

“The remorse and apologies that he communicated,’’ Schafer said in an e-mail, “may have tempered a more drastic decline in his appeal, but his refusal to take questions about it added some fuel to his fire.’’