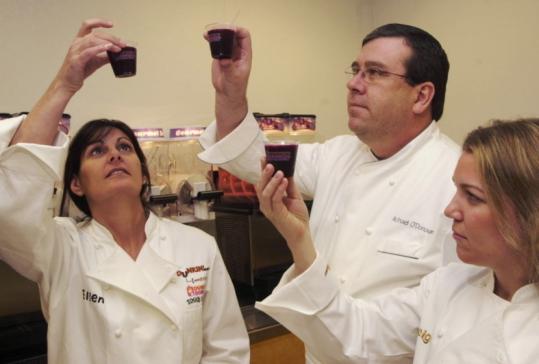 A former top executive at Dunkin’ Brands who helped assemble the chain’s culinary dream team has filed a $5 million lawsuit that accuses the company of violating a separation agreement by providing negative references, ruining his reputation with defamatory statements, and causing the loss of multiple job opportunities.

Michael O’Donovan, a European master chef who served the Queen of England, worked as vice president of global research and development for Dunkin’ from May 2004 through July 2007, overseeing the hiring of Boston chef Stan Frankenthaler, a makeover of the menu, and the long journey to eliminate transfats from doughnuts.

O’Donovan accuses Dunkin’ and several executives in his suit of breaching a severance agreement from 2007 that required the Canton company to keep confidential the circumstances surrounding his departure and refrain from making any disparaging statements about O’Donovan that could have a harmful effect on his reputation or prospects for future employment, according to a copy of the complaint filed last week in Norfolk Superior Court.

The false and defamatory statements included allegations of “excessive drinking, inappropriate conduct with female employees, chronic inability to meet deadlines, and a misleading and dishonest character,’’ the complaint said.

O’Donovan could not be reached for comment. His lawyer, Bruce Norwell, would not disclose details of O’Donovan’s separation from the company.

“There was a confidentiality clause, and I don’t want to get into the underlying issues. The complaint is pretty detailed, and at this point I’m not inclined to comment further,’’ Norwell said.

Andrew Mastrangelo, a Dunkin’ spokesman, said the company had not been served with the lawsuit.

“When we are served, we will review it,’’ Mastrangelo said.

At a National Restaurant Show in 2008, O’Donovan said, he was approached by Scott Murphy, a former colleague at Dunkin’. According to the lawsuit, Murphy informed O’Donovan that James FitzGerald, another Dunkin’ colleague, had told Murphy that he “had ‘[expletive O’Donovan] good’ by giving a very damning reference, and that O’Donovan did not get the job as a consequence of that bad reference.’’

FitzGerald, who could not be reached for comment, also is a defendant in the suit. A Dunkin’ spokesman said FitzGerald, who is vice president of Northeast operations, has not been served with the lawsuit so it would be inappropriate for him to comment.

In March 2009, O’Donovan began exploring the possibility of a start-up restaurant business. Carson Biederman, a managing partner at Boston private equity firm Mustang Group, decided to work with O’Donovan to develop a restaurant concept, Maza Fresh, that would serve healthy Mediterranean-style cuisine, according to the lawsuit. By June last year, they had received commitments from investors of more than $500,000.

In July, they met with a potential investor who suggested a meeting with the chief executive of TriMark, an industry supplier of restaurant equipment.

Knowing that TriMark also did work with Dunkin’, O’Donovan said in the complaint, he contacted lawyer Bud Remillard in Dunkin’s corporate counsel’s office to remind him of the severance agreement and try to “eliminate the prior problems that arose every time Dunkin’ was contacted for a reference,’’ according to the suit.

O’Donovan said he specifically requested Remillard speak with FitzGerald and Dunkin’ executive chairman Jon Luther to ensure there would be no issue and Remillard indicated he would do so.

But a day later, on July 3, Biederman told O’Donovan the references had come back “very damaging, so much so that the Maza Fresh project was in jeopardy,’’ according to the suit.

O’Donovan asked Biederman specifically what the references had said, “to which he responded that they included allegations of excessive drinking, inappropriate conduct with female employees, chronic inability to meet deadlines, and a misleading and dishonest character.’’

Later on, Biederman told O’Donovan the negative references originated from “the most senior of executives at Dunkin’,’’ the court records said.

Although O’Donovan and Biederman discussed options for trying to save Maza Fresh, it became increasingly clear that the project would probably not go forward. In their last discussion, Biederman advised O’Donovan that “any action that he might take to seek any remedy against Dunkin’ for the damage it had caused him would make ‘enemies for life’ ’’ of Biederman and others in the financing arm of the industry, according to the complaint.

In the lawsuit, O’Donovan claims he has suffered irreparable damage to his reputation in the food service industry, endured financial hardships, lost employment opportunities, business relationships, personal funds expended for Maza Fresh, and suffered great emotional stress because of the actions of Dunkin’ and is seeking $5 million in damages.

Weymouth Dunkin' Donuts still makes them on-site.
Your comment is subject to the rules of our Posting Policy
This comment may appear on your public profile. Public Profile FAQ