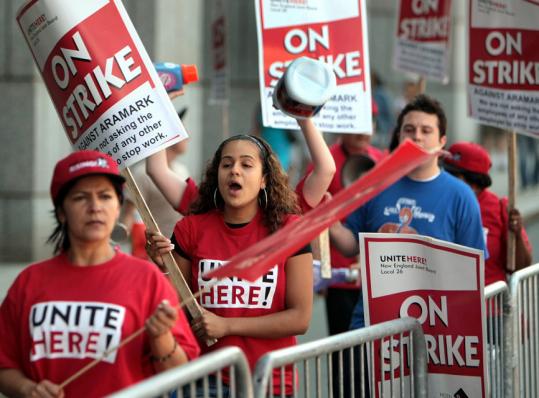 The Massachusetts Convention Center Authority plans to bring in a new food and beverage provider to replace longtime vendor Aramark Corp., a move that is upsetting union officials who worry that the new company may not honor a hard-won labor agreement.

Levy Restaurants, based in Chicago, will retain the approximately 500 workers currently employed by Aramark under the same union contract, according to James Rooney, the authority’s executive director. But officials from Unite Here Local 26 said there is no agreement between Levy and the union to rehire the workers or uphold the terms of the contract.

“No one’s going to lose their job, and it’s the same contract that they just signed,’’ Rooney said, adding that Levy was demonstrating good faith by accepting an agreement that was reached with another company.

But the union, which is planning to picket in front of the State House tomorrow, insists that an agreement between Levy and Unite Here needs to be signed before the vote occurs.

“The MCCA has kept the union completely in the dark about this process,’’ said Janice Loux, president of Unite Here Local 26.

Levy Restaurants serves six convention centers around the country and more than 100 arenas, ballparks, and stadiums, such as the Staples Center in Los Angeles, Wrigley Field in Chicago, and Lambeau Field in Green Bay, Wis. Levy also owns nine restaurants, including Spiaggia in Chicago, a date night favorite of President Obama and his wife, Michelle.

Levy officials did not comment last night about Unite Here’s concerns. The Boston convention center contract would be Levy’s first foray into the region.

Aramark, which has been the Massachusetts Convention Center Authority’s food and beverage provider since 1987, competed for the new contract but did not make the final cut. The authority has had an admittedly rocky history with Aramark, Rooney said, citing inconsistent quality of food and service.

“We had a wonderful relationship with the MCCA and were thrilled to be at the facility through the years,’’ said Dan Smith, Aramark spokesman. “We’re sorry to see our partnership come to an end.’’

Unite Here Local 26 and Aramark, which serves Fenway Park and Boston University, have also had a contentious past. The union and the food services company engaged in bitter contract negotiations for more than a year - a standoff that included the union picketing outside the convention centers - before an agreement was reached in December 2008.

Unite Here has a good relationship with Levy nationally, Loux said, but until there is a signed agreement, “nobody’s word is good enough.’’