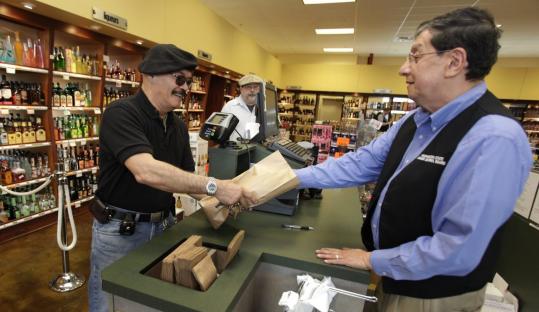 Vodka was Americans’ favorite liquor last year, with $4.56 billion spent on it - nearly a third of the revenue from sales of spirits. (Ted S. Warren/ Associated Press)
By Emily Fredrix Associated Press / February 3, 2010

People drank more liquor but turned to cheaper brands, according to an industry group. They also drank more at home and less in pricier bars and restaurants.

The lowest-priced segment, including brands such as Popov vodka, grew the fastest, with volume rising 5.5 percent, after edging up 0.6 percent in 2008. The most expensive brands, priced roughly $30 or more for a 750 ml bottle (think Grey Goose), fell the most, 5.1 percent.

Kenneth Jolly of Milwaukee has been swapping his favorite liquors, such Patron tequila, for cheaper brands such as Jose Cuervo. For him, it’s simple math.

“If you consume a lot on a regular basis and you have people come to your house, you have to adjust,’’ said Jolly, a 27-year-old network technician in Milwaukee who buys liquor every other week. “If your body can take it, you might as well buy the cheaper liquor.’’

Sales in stores - which make up three-quarters of liquor sales - rose about 2.1 percent, while sales in restaurants fell 3 percent.

“People still want to entertain themselves, they still want to get together with family and friends, so a lot of people will move from a restaurant to their living room’’ to save money, said the council’s president, Peter Cressy.

Vodka remained Americans’ favorite liquor. The $4.56 billion spent on vodka accounted for almost a third of all spirits sold.

Sales volume for the cheapest versions of tequila rose 21 percent, the fastest of any type of spirit. That’s most likely because people who entertain are using premade margarita mixes to serve at home, said David Ozgo, the council’s chief economist. Plus you can mix it before guests arrive, so they don’t know what brand you use, said Joan Holleran, at the research firm Mintel.

Of course, switching brands isn’t the only way to economize.

Matt McCluskey, a 28-year-old researcher in Santa Monica, Calif., started buying most of his alcohol at the warehouse-style store Costco, trying to save money by buying bigger bottles. Now he spends $36 for 1.75 liters of Maker’s Mark bourbon, rather than $25 for less than half that at his local liquor store.

“It’s a lot harder to pour. That’s the only drawback,’’ he said.

Small-scale distilleries make high-quality liquor.
Your comment is subject to the rules of our Posting Policy
This comment may appear on your public profile. Public Profile FAQ