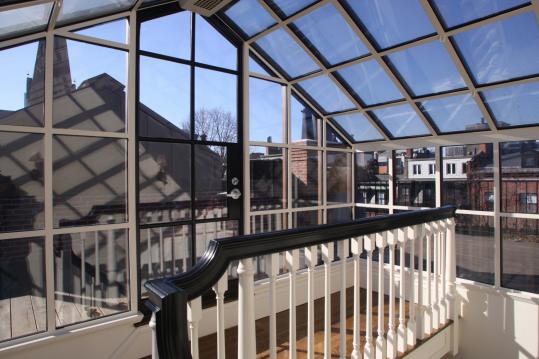 A home on Brimmer Street will be auctioned March 3. The structure, which has a roof deck (above), underwent $4 million in renovations. (Bill Greene/ Globe Staff)
By Jenifer B. McKim Globe Staff / February 3, 2010

When developers Peter and Elizabeth Georgantas paid $2 million for a dilapidated 1860s Beacon Hill row house four years ago, they saw potential for a hefty profit. And why not? The luxury market was booming. So the couple didn’t cut any corners in a $4 million renovation that included imported Italian marble in the master bath, a wine cellar, a greenhouse, and a wet bar in the library.

But in September 2008, just as they put the 5,700-square-foot building up for sale for nearly $9 million, the luxury housing market froze like the Charles River in February. Financial markets toppled, and buyers stayed away. As the house sat vacant, the Georgantases reduced their asking price by about $2 million, but still no takers.

“The timing was terrible,’’ Peter Georgantas said. “The whole real estate community is frustrated with the lookers.’’

Now, hoping to get the attention of buyers, he and his wife have decided to auction the Brimmer Street house, a rare event in this exclusive part of the city that will be closely watched to gauge whether it will lure buyers to the stalled high-end market.

While there have been an increasing number of auctions of luxury condominiums in the Boston area, this is the first one in recent memory for an exclusive single-family home on Beacon Hill. Sally Brewster, a real estate agent who focuses on the neighborhood, said sellers and agents are hoping the auction is successful. “Let’s see if it works,’’ said Brewster. “It might start a new trend.’’

Georgantas, 38, said he chose the unorthodox sales method to create a sense of urgency by putting an absolute end date on the home’s availability. It will also allow him to concentrate on a new project - building 37 moderately priced condos in the South End. He is obligated to sell the Beacon Hill house at the minimum bidding price of $5 million, but hopes competition will drive the price higher.

The March 3 auction will be conducted in tandem with a similar sale of a two-bedroom, 2,400-square-foot condo on nearby Lime Street that was last listed for $1.8 million and will be sold at a minimum price of $1.2 million. Owner Greg Cohen of Coda Development said he, too, chose the auction process because of its finality. “With the auction, you have a definitive end,’’ he said.

Great Rock Auctions, a newly incorporated Boston firm, will oversee the Brimmer auction. Jeremy Freid, the company’s principal, said owners have been looking for different ways to market their homes. “After the auction, and assuming it’s successful, we certainly will get a lot of calls from the high end in Boston,’’ Freid said.

Indeed, the auction process has been accepted among a growing number of high-end developers in the area. Last year, there were auctions for nine condos in the Bryant Back Bay complex, with starting bids above $1 million; 46 units at Longwood Towers in Brookline; and about four dozen units at Nouvelle at Natick at the Natick Collection. All of the condos generally sold for above minimum bids, but below their last asking price, said Jon Gollinger, chief executive of Accelerated Marketing Partners, the Boston firm that ran the auctions.

Gollinger said the Brimmer auction will probably be a watershed event for single-family homes in downtown Boston. “You are not looking for bottom feeders, you are looking for people who don’t want to overpay,’’ he said. “It allows a critical mass of people to come in and bid on it and ultimately prove the price point.’’

The Georgantases run a family company called PEG Properties & Design and made their money in real estate over the past 15 years by renovating row houses and selling them at healthy profits. Peter started in business as a real estate broker and later began buying his own properties. Elizabeth, 35, is an interior designer.

They bought the Brimmer Street house and an adjacent building for $4 million with plans to convert the neglected 18 rental units in them back into two elegant single-family homes. The idea was to move into the neighboring property and make it their permanent home. They upgraded both buildings, essentially gutting both structures and rebuilding them with pricey features. Each includes five bedrooms, four baths, three half baths, and seven fireplaces. The floors are heated, and each home has an air purification system and custom cabinets.

They plan to move into their home this spring - hopefully, with new neighbors next door. Peter said he and his wife haven’t decided when they might take on another challenge like Brimmer Street. But he is eager to be done with it. “I didn’t have a crystal ball,’’ he said. “I could wait another six months, but we want to get our next project started.’’ 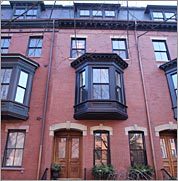 See inside the home