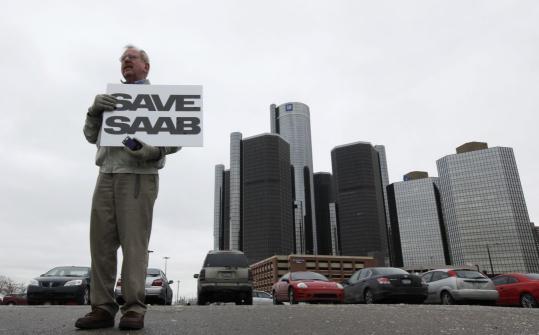 Jon Rosenberg has been following the declining fortunes of Saab Automobile for almost a year, as the Swedish car brand struggled to survive under the ownership of bankrupt General Motors. But last week, just after a deal to sell the automaker collapsed, Rosenberg was moved to action.

He hopped in his 2005 Saab and drove five hours from his Burlington, Vt., home to Charles River Motors in Watertown, and bought a brand new 2009 Saab 9-3 sedan.

“I didn’t need one,’’ he admits, “but I just had to have a new one before they disappeared.’’

Rosenberg, who has owned “11 or 12’’ Saabs, is one of many drivers buying car brands threatened with extinction. Some, like Rosenberg, are motivated by sentiment; others are responding to the deep discounts offered by automakers and dealers - especially General Motors, which has been tempting buyers with dramatic markdowns on Saabs and two other brands it plans to discontinue: Saturn and the venerable Pontiac.

GM said it was discontinuing Pontiac last April; GM’s Saturn division got the same news last fall, after a deal to sell the brand fell through. Saab is scheduled to be “wound down’’ - and the brand discontinued - if a suitable buyer is not found by tomorrow.

It was the discounts, not sentiment, that inspired Judy Bitto, 64, of Malden, who bought a Pontiac G6 last week at Herb Chambers Pontiac in Danvers.

“I was actually planning to buy a Chevy Malibu,’’ she said.

But Bitto’s husband saw a television advertisement promoting “up to $7,000 in rebates’’ for Pontiacs. Bitto bought one of the last two Pontiacs on the showroom floor.

A loyal General Motors customer, Bitto said she believes the company will be able to service the car for years to come. The car’s warranty, 100,000 miles or five years, gave her an additional level of comfort.

“I don’t have any special feelings for the Pontiac brand,’’ she added, “but I like saving thousands of dollars off the sticker price.’’

That’s what brings in buyers for any car, said Herb Chambers, who owns 45 dealerships in Massachusetts and Rhode Island.

Chambers said brand loyalty is a factor for Saab and, to a lesser extent, for Saturn, but Pontiac has not been attracting loyalists in New England.

“There was some real appeal, back in the GTO era’’ of the 1960s and 1970s, said Chambers, adding that the Pontiac brand had already “lost a lot of its magic’’ by the time GM decided to discontinue it.

Certainly Rosenberg, who owns a fabric store called Rags and Riches in South Burlington, Vt., did not make the drive to Watertown just to get a low price on his new 2009 Saab 9-3, even though he said the automatic markdown made it the “best deal I’ve ever gotten on a Saab.’’ Yesterday at the Watertown dealership, new 2009 Saab 9-3 sedans with list prices around $33,000 were selling for $22,000.

“I didn’t even take it for a test drive,’’ said Rosenberg, who had his heart set on a car with a stick shift that was only available in Watertown.

A self-described member of the Woodstock generation, Rosenberg said he began driving Saabs because they “were a rejection of the status quo. The way they looked, and the Scandinavian influence - it was a rejection of Ford and GM.’’

He proudly reported that he drove to the original Woodstock Festival in a Saab.

David DelTorto, the top salesman at Charles River Saab, was not surprised by Rosenberg’s impulsive purchase.

“It’s been nuts around here, very busy,’’ he said. “This is an emotional decision for many Saab owners.’’

Another indication of the passion of Saab owners: A group of enthusiasts from around the country, including some from New England, converged yesterday on GM headquarters in Detroit for a “Save Saab’’ rally.

Saturn, which was launched in the mid-1980s by GM to be a different sort of auto company, is also attracting last-minute buyers as it is phased out. Nancy Whitcomb, 57, an artist and teacher, bought a new Saturn last week at Saturn of Warwick, in Rhode Island. It was her fourth.

“I really like them. I’m sorry to see them go,’’ she said, adding that she regarded Saturns as “basic and sensible, safe.’’

Whitcomb said she had also come to appreciate the unconventional approach of Saturn dealers, who eschew haggling in favor of simple, nonnegotiable list prices.

“I just couldn’t bear to get involved in the typical car-buying negotiations,’’ she said. “I’ve been spoiled by that non-salesmen approach at Saturn.’’

Mark Goldstein, general manager of Saturn of Warwick, said he has been seeing a lot of customers like Whitcomb.

“We haven’t had traffic like this for years,’’ he said. “It’s a combination: loyal owners who want to grab one last Saturn, and some buyers who are inspired by the fire-sale prices. A price reduction of $6,500 gets people excited.’’

Goldstein said the dealership has been selling four to six Saturns a day, more than before GM said it was discontinuing the brand.

“It’s been a frenzy,’’ Goldstein said. “Saturn is going out in a blaze of glory.’’

Whitcomb said she was initially considering a used Saturn, but the $6,500 discount GM is offering allowed her to buy a new model. She said she’s not worried about the availability of service or parts for her soon-to-be discontinued brand.

“The dealer said they’d still take care of the new Saturns,’’ she said. “And I trust them.’’

Whitcomb added that her last Saturn-buying experience was satisfying, right until the end.

“The dealer delivered the car the same day, typical great service,’’ Whitcomb said. “And after he dropped it off, the delivery guy gave me a hug.’’