Sandwich chain plans to open up to 130 new stores 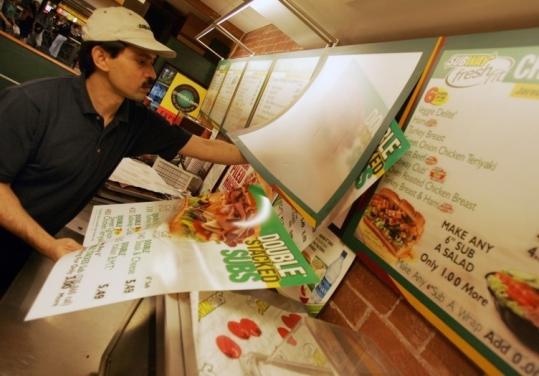 Subway shops, like this one in New York, are all individually owned and operated. There are 175 in Massachusetts. (Dima Gavrysh/Associated Press/File 2007)
By Megan Woolhouse Globe Staff / December 11, 2009

The submarine sandwich wars might soon be upon us.

Officials at the Subway sandwich chain said yesterday that they plan to open 130 new stores in Massachusetts over the next five years. There are already 175, according to Bob Hurley, a Subway development agent.

“As far as Subway is concerned, it’s just underdeveloped,’’ Hurley said yesterday of the Massachusetts sandwich market. “There’s only one store for every 25,000 people. If you look at surrounding areas, states like Rhode Island and Maine, there’s one store for every 12,000.’’

But veteran Massachusetts sub shop owners said they see no sandwich shortage in the state and questioned whether the effort will be successful.

Mike Baravella, manager of Richardi’s Original Submarine Sandwich in Braintree, believes the chain could stumble, citing the economy. He said a Subway nearby closed in the last year.

“We buried that one,’’ Baravella said. “I don’t think Subway can even compete with mom and pop places.’’

Total traffic in the quick service industry - restaurants like Subway and Burger King - fell 2 percent in the twelve months ending in September, according to NPD Group/CREST, an industry research firm.

The first Subway shop opened in 1965 in Bridgeport, Conn., and the chain has grown to 31,000 stores worldwide with more than $8 billion in sales in 2007, according to the company’s website.

The chain has often promoted itself as an alternative to “greasy fast food.’’ It was the Boston firm MMB advertising that brought sandwich everyman Jared Fogle, a Subway customer who lost 245 pounds on a diet of Subway sandwiches, to the world.

Hurley, a Holyoke native, owns eight Subway shops in the Albany, N.Y., area. He said with the unemployment rate high and real estate prices lower than they have been in years, he hopes more people will consider going into business for themselves. But that is a challenging proposition. Subway does not finance new shops, and start-up costs run between $150,000 and $200,000.