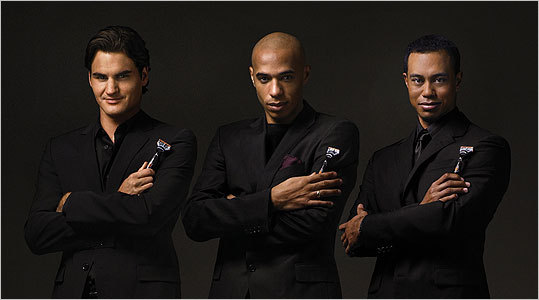 When Gillette rolled out its biggest sports marketing campaign in 2007, it had what seemed to be an advertiser’s dream team: Swiss tennis champion Roger Federer, French soccer star Thierry Henry, and - perhaps the most famous of them all - American golfer Tiger Woods.

The unbeatable lineup is now giving Gillette razor burn. In September, Federer threw a temper tantrum at the US Open finals, which he lost in an upset. Then, last month, Henry set off an international furor when he illegally touched a ball with his hand to set up a winning goal in a World Cup qualifier between Ireland and France.

Gillette, the Boston-based shaving giant, has not aired a commercial featuring Woods since Nov. 29, according to Nielsen Co., which tracks TV ratings. By comparison, Gillette last year ran a 15-second spot featuring Woods 25 times be tween Nov. 29 and Dec. 7.

A celebrity endorsement “is a great thing, but the reality is you cannot possibly predict human behavior,’’ said Chris Cakebread, a Boston University advertising professor. “You could say it was the perfect storm of knucklehead athletes, all screwing up at the same time, costing Gillette a fortune in negative publicity. Thus the danger of using athletes, or entertainers, as endorsers for your brand.’’

Once a scandal breaks, advertising observers say, some companies are slow to distance themselves from their pitchmen. The brands may decide to not use that person as much in promotions, at least until the controversy fades, or they may decide not to renew the deal.

A spokesman for Gillette, a unit of Cincinnati-based consumer products company Procter & Gamble Co., said the shaving company will continue with the campaign.

“At this time, we are not making any changes to our existing marketing programs,’’ Mike Norton, a Gillette spokesman, wrote in an e-mail.

He was unavailable for phone calls and would not directly comment on Woods’s endorsement deal. “We are running our media schedule as planned.’’

Woods’s agent did not respond to Globe requests for comment. Federer’s and Henry’s agents were unavailable yesterday.

Gillette unveiled the Champions campaign in 2007 as its largest sports marketing initiative, banking on the three athletes’ global stardom to promote the its new Fusion shaving line. Woods, Federer, and Henry sported shaving cream on their faces for a news conference in the United Arab Emirates to launch the campaign, which one Boston advertising executive valued at $40 million a year.

Gillette’s president of global grooming, Chip Bergh, said at the beginning of the campaign, the company chose Federer, Henry, and Woods for “their performance off the field, in their charitable actions, support of social causes, or their reputations as icons of true sporting values.’’

BBDO Worldwide, a New York ad firm, handles Gillette’s advertising including the Champions campaign. A spokeswoman for the agency would not comment on the campaign and referred calls to Gillette.

In the US version of the campaign’s online ads, Woods, Henry, and Federer are featured standing in sleek, black suits, with Federer holding a racquet, Woods leaning on a golf club, and Henry clutching a soccer ball. In the French version of the ad, Henry doesn’t have a ball in his hand but has his hand in his pocket. Ad observers say Gillette may be trying to avoid a backlash from fans still upset over Henry touching the soccer ball during a World Cup qualifying match.

But Norton, of Gillette, said “there have been no recent changes to the Gillette Champions website’’ and “the French version of the site has been that way since 2007.’’

Of the three inaugural athletes in the Champions campaign, Woods’s recent media frenzy may be the most damaging. So far, according to media reports, Woods’s major sponsors - which include Nike, global managing consultancy Accenture, and video game company EA Sports - are standing by him. Endorsement deals have helped put Woods at the top of Forbes magazine’s annual ranking of the world’s highest-paid athletes - for eight straight years. The magazine estimates he earns $110 million annually between endorsements and tournament prize money.

But Woods’s presence in the ad world has been noticeably diminished since his auto accident, with his commercials not appearing during major sporting events in the past two weekends. “He is a dangerous, dangerous person for a brand right now,’’ said Cakebread, the BU professor. “The guy’s reputation has spiraled right down the sewer.’’

John Fisher, a former chief executive of sneaker company Saucony who teaches sports brand marketing at Babson College, agrees, saying that before the golfer’s auto crash, “the Tiger brand was referred to as a platinum brand’’ but he has destroyed his image. “When you break trust, it’s really difficult to recover from it,’’ he said.