Can a lull in solar activity head off climate change?

It might help but don’t expect it to last, scientists say - the sun isn’t the real issue 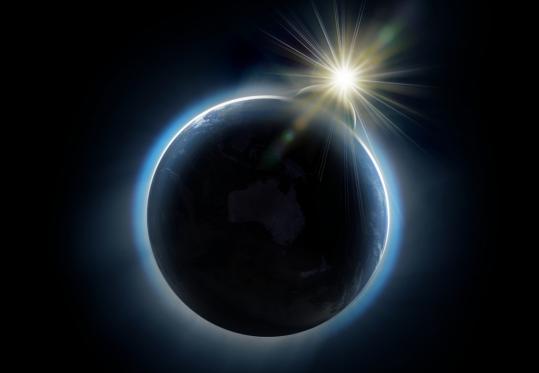 “The sun is in the pits of the deepest solar minimum in almost 100 years,’’ said Madhulika Guhathakurta, lead program scientist for NASA’s Living With A Star program, whose focus is solar variability and its effects on the earth.

From the earth’s perspective, scientists say, the periodic lull in the sun’s activity means cosmic rays reaching our section of the solar system are way up, the planet’s ionosphere is way down, and the minimum may be producing some small but still important counteraction to climate change - though that is controversial.

As world leaders, eco-activists, and researchers gather in Copenhagen today for an international conference on global warming, the sun is providing cold comfort to more dire predictors of climate catastrophe.

Because of slightly decreased solar irradiance during the ongoing minimum cycle, the sun may be acting as a counterweight to the warming effects of greenhouse gases, according to recent research by Judith Lean of the Naval Research Lab and David Rindof NASA’s Goddard Institute for Space Studies.

The minimum, the research suggests, accounts for the flat temperature trend of this decade, which has flummoxed climate experts as thermometer readings fail to support forecasts of accelerated warming.

But even if a less radiant sun is partially offsetting global warmth caused by greenhouse gases, scientists stress that the overall effect is relatively slight - and almost certainly won’t last.

The sun usually shifts in 11-year cycles from minimum to maximum activity - when scores of sunspots, or magnetic storms, may swirl on the sun’s face at any given time - and back again. The last solar maximum peaked in May 2000, with scientists measuring roughly 170 sunspots; by and large, solar activity has been quieting since. The cycle ebbed to its minimum in 2007 - and the expected bounce back has been notably slow.

“The sun has been at an extended minimum for the past two years,’’ said Leon Golub, senior astrophysicist at the Harvard-Smithsonian Institute for Astrophysics and a leading sun scientist. “But only about 10 percent of climate variation is due to the sun. That means 90 percent isn’t.’’

An upcoming space mission by NASA will seek to unravel the many mysteries surrounding the sun’s highs and lows. The sun is driven by mighty magnetic forces, and the Solar Dynamics Observatory - scheduled for launch in February - will employ sophisticated atmospheric imagers, ultraviolet scanners, and other instruments to explore the magnetic action deep beneath its seething surface.

“Magnetic fields produced inside the sun are the key to all solar activity,’’ said Golub, whose Cambridge-based team built the specialized telescopes that will probe the multiple wavelengths of solar atmosphere from aboard the observatory.

One aim of the $850 million mission is to determine whether prolonged spells of solar inactivity could plunge the earth into a period of global cooling.

“No solar physicist alive today has experienced a minimum this deep or this long,’’ said NASA’s Guhathakurta, who stressed that reduced activity is “not a permanent solution to global warming, but may provide temporary relief.’’

If the solar lull lasts, history suggests it could conceivably stall global warming by years or even decades. During the so-called Maunder Minimum - an 80-year stretch of low sunspot activity in the 1600s and 1700s - Europe and North America suffered brutal winters and truncated summers in what came to be known as the Little Ice Age.

There is disagreement as to whether the sun is close to exiting the minimum, and it’s too early, scientists say, to predict whether the minimum will be extremely prolonged.

“The sun is unpredictable in its cycles; it’s the paradigm of chaotic systems,’’ said W. Dean Pesnell, astrophysicist with NASA’s Goddard Space Flight Center and project scientist with the observatory mission. “That means we should never be surprised by the sun’s surprises.’’

During maximums, major solar magnetic activity can shut down power grids, cripple communications, and short-circuit satellites. According to the National Academy of Sciences, the sun every century or so can spawn a geomagnetic storm capable of inflicting 20 times as much economic damage as Hurricane Katrina - trillions of dollars’ worth.

Minimums can be problematic, as well, Pesnell noted.

Humans at sea level are protected by the atmosphere, but aircraft crews and passengers on long-haul flights are these days exposed to higher levels of cosmic radiation. While a few annual plane trips are not likely to be harmful, Pesnell said, “it’s certainly better to be exposed to less of these rays than more.’’

More weirdly, space junk is accumulating at troublesome rates as the earth’s upper atmosphere collapses as a result of decreased solar activity - which normally energizes and expands the ionosphere to about 400 miles above earth.

“The ionosphere has fallen to about 260 miles, and solar minimum is to blame,’’ Guhathakurta said. “The collapsed upper atmosphere means less drag’’ - or friction - “on satellites and space junk. That means more stuff is accumulating up there. And that’s not a good thing.’’

In February, two satellites collided over Siberia, creating thousands of fragments - highly dangerous to other satellites and, potentially, manned space vehicles - whose orbit would typically decay in a few years, causing them to evaporate in the plunge toward the earth.

According to simulations done by the Orbital Debris Working Group at the Johnson Space Center, however, some 80 percent of the junk could remain in more or less continuous orbit if the solar minimum continues.

The sun’s nastiest trick, however, remains comfortably distant. In 4.5 billion years it’s expected to turn into a red giant - obliterating the earth.

“Meanwhile, we’ve got [solar] explosions stronger than a billion atomic bombs, million-mile-per-hour solar winds, and radiation storms that would be lethal in minutes were it not for the protective cocoon of earth’s magnetosphere,’’ Guhathakurta said. “So we’re expecting some really exciting stuff between now and then.’’