Companies need a way to give back. Nonprofits need managers with executive training. One firm helps them meet on common ground. 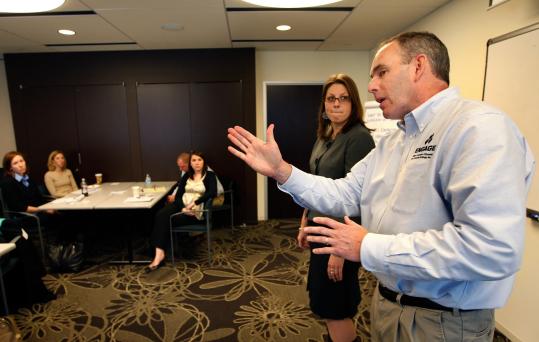 A few years ago, Bruce Campbell had a thriving career teaching leadership and presentation skills to company managers, and he spent many an off-hour coaching staff and executives at the United Way of Massachusetts Bay and Merrimack Valley pro bono. But he wanted to do more.

A chance conversation with Milton J. Little Jr., then United Way’s chief executive, gave Campbell an idea: What if Campbell could get his corporate clients to fund training for nonprofit leaders - who often need management skills but rarely have the resources to get such schooling?

Early last year, Campbell merged his business with his volunteer work, reinventing his Boston-based company Engage LLC to offer what he calls “socially responsible executive coaching.’’ Under Campbell’s model, companies invite nonprofits to share in the training that their managers receive, often via joint classes on such topics as presentation skills, strategic sales, and communications.

“From a business leader’s perspective, it’s making an impact on nonprofits beyond donating money or time,’’ said Campbell, whose clients include State Street Corp., Deloitte LLP, Boston Medical Center, and the Boston homeless shelter Pine Street Inn. Nonprofits, in turn, learn how to deliver a more strategic message “so they can grow and serve more people,’’ he said. “That’s what executive directors love.’’

It’s a simple innovation launched by a one-man firm, yet the ripple effects are potentially enormous, from inspiring new synergies between the nonprofit and for-profit worlds, to giving both sectors another way to retain talented employees who increasingly see themselves as socially responsible.

And in the recesssion, simply teaching nonprofit leaders how to make better presentations could mean the difference between failure and survival. Amid a state budget crisis and sluggish donations, two-thirds of Massachusetts nonprofits are in fiscal distress. Only about one-fifth report having enough cash to cover more than six months of expenses, and most are experiencing higher demand for their services, according to the New York-based Nonprofit Finance Fund, which offers financial advice and loans to nonprofits.

“Now the hard times are most definitely here, and it is crucial that nonprofit organizations and their stakeholders work very quickly - and together - to take bold actions to ensure their survival,’’ wrote Paul Grogan of the Boston Foundation, which helps area nonprofits serve the community. The foundation held 14 free workshops last spring for 300 nonprofit employees on topics including, “Managing Your Organization in Hard Times’’ and “Strengthening the Fundamentals of Fundraising.’’ The foundation expects to hold more such seminars.

Historically, such training - especially in management - has been scarce, simply because funds go first to the cause.

“At the end of the day, what donors are giving money for is to deliver programs,’’ says David Simms, a partner at the Bridgespan Group, a Boston-born nonprofit that offers strategic consulting and executive recruiting to nonprofits. Still, donors increasingly recognize that strong managers deliver results, Simms said.

That’s one reason why 42 percent of chief executives of medium to large nonprofits have two or more years of management experience in the for-profit world, according to Bridgespan, and why socially responsible executives see promise in Campbell’s approach.

John Hailer, chief executive of Natixis Global Asset Management North America, admits that when Bruce Campbell first called to speak about his new work at Engage, Hailer couldn’t understand what he was talking about. But soon Hailer got it and became an early and eager supporter.

“For us, professional training to strengthen the skills of our workforce is critical,’’ said Hailer, who first met Campbell years ago playing pickup basketball at the Natick Sports Club. “But often nonprofits don’t have that luxury.’’

“That’s where the magic is - getting emerging business leaders and nonprofit leaders in the same room so they can coach each other and see each other’s different perspectives,’’ said Campbell. “All of a sudden, business people and nonprofit people are getting together for lunch a week later, and relationships are forming.’’

Through Natixis, 12 development staff and managers at The Home for Little Wanderers have received Campbell’s coaching in the past two years, said Scott Inman, senior corporate relations manager at the Boston-based child service agency, which has 600 employees. Through coaching from Campbell, Inman has learned how to build deep, long-term relations with potential donors, rather than simply asking for money.

Recently, Inman was preparing to meet with an executive for the first time to discuss a donation. Over coffee, Campbell coached Inman to learn how the executive might want to make a mark in the world, and ask how he could introduce the Home to others in his field. In a short meeting, “we walked away with more than we’d ever expected,’’ said Inman. The executive is not only planning to donate but is offering key connections with other high-level business leaders.

To survive the recession, nonprofits are trying new strategies - especially new synergies with the business world. Companies are realizing that “giving back’’ is a top priority for their customers, employees, and communities. And Bruce Campbell is magnifying the good works of both businesses and nonprofits, and showing how one person can make the world a little better.

Maggie Jackson is the author of “Distracted: The Erosion of Attention and the Coming Dark Age.’’ She can be reached at www.maggie-jackson.com.

Correction: Because of an editing error, this column originally misspelled the name of Paul Grogan, chief executive of the Boston Foundation.