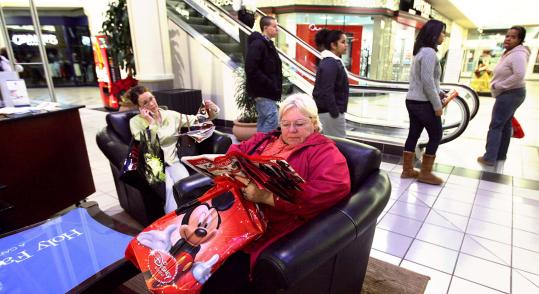 Donna Tevepaugh of Lowell waited yesterday at 4:45 a.m. for stores to open at the Mall at Rockingham Park, across the border in Salem, N.H. (Cheryl Senter for The Boston Globe)
By Megan Woolhouse and Jenn Abelson Globe Staff / November 28, 2009

SALEM, N.H. - Massachusetts’ loss is Juliana Aquino’s gain. The 27-year-old mother of two could have done her Black Friday shopping at the Wal-Mart Supercenter in Methuen, where she lives. Instead, she made a 15-minute trek into New Hampshire, where there is no such thing as a sales tax.

“I come here all the time, even though there’s one closer,’’ Aquino said at 5 a.m. yesterday, pushing a shopping cart loaded with four flat-screen TVs. “I come up here even to buy groceries.’’

Massachusetts shoppers are fleeing the state’s rising sales tax in droves and shopping in New Hampshire. Fueled by necessity - and in some cases anger - customers said they were heading over the border to save money and score deals. Cars with Massachusetts license plates clogged the roads and lots across Salem. And through the early evening yesterday, the Mall at Rockingham Park in Salem and Pheasant Lane Mall in Nashua - both just a few miles over the border - reported spikes in traffic over last year, according to Laurel Sibert, a spokeswoman for Simon Malls, which runs both shopping centers.

“The New Hampshire malls have definitely benefited from the sales tax increase in Massachusetts,’’ Sibert said.

In August, state officials increased the Massachusetts sales tax to 6.25 percent from 5 percent as a way to help fill holes in the state budget. The tax increase, which is expected to generate about $759 million this year, applies to nearly all retail sales, with the exception of food and individual items of clothing costing $175 or less.

Since it went into effect, officials and some businesses in the Granite State have made sure consumers in the Commonwealth don’t forget about their sales-tax-free status. The New Hampshire Division of Travel and Tourism Development last week stepped up its efforts and began promoting Black Friday deals around the state. In North Conway, the Cranmore Mountain Lodge welcomed some Massachusetts residents this weekend with a “Shop Till You Drop’’ package. For roughly $200, guests receive a two-night stay, breakfast, energy bars, and of course, coupons. “We’re just 5 miles away from the outlet stores and we want people to be able to take advantage of what New Hampshire offers - no taxes,’’ said Freddie Procyk, owner of the Cranmore Mountain Lodge.

Monica Harper of South Boston is one of those consumers looking north for shopping relief this year. She is planning to buy nearly all her gifts in New Hampshire, including big purchases like a television for her daughter. “Taxachusetts is getting to be a bit overbearing and intrusive toward my wallet,’’ said Harper. “I just went up there to buy a pair of running shoes last week because I just wasn’t willing to pay the taxes.’’

“Consumers are angry and being very frugal and avoiding the tax by going to New Hampshire or shopping online,’’ Hurst said. “Our concerns for Black Friday and the rest of the season are that consumers are going to take their dollars elsewhere. We understand the anger and the need to be frugal. But we hope consumers recognize the importance of spending the money locally to protect jobs for family, friends, and neighbors.’’

Bob Bliss, a spokesman for the Massachusetts Department of Revenue, said in an August interview with the Globe that the net revenue gains from the sales tax hike outweigh the $48 million in expected losses from sales diverted to New Hampshire, the Internet, or reduced demand. Officials at the Massachusetts Department of Revenue could not confirm projected losses in tax revenue from people going to New Hampshire yesterday. But a recent report by the department showed that Massachusetts’ tax revenues for the first half of November totaled $41 million, equal to collections over the same period last year.

However, state tax revenue projections meant little to Kim Morris of Billerica, who drove to New Hampshire yesterday to find an affordable flat-screen TV for her son. She purchased a 26-inch TV for $299 at Sears in the Mall at Rockingham Park, even though it was more than she wanted to pay. But she said at least she avoided the sales tax.

“It’s a trip and a hassle,’’ the grocery store employee said. But the savings? “It’s just worth it,’’ she said.

For many, the tax savings was considerable. Aquino saved at least $50 on the four televisions she bought as gifts. The extra money will help her as she studies to become a medical administrator.

Donna Woodman of Bradford, Mass., said she felt lucky to live close enough to the New Hampshire border that she could take advantage of shopping there regularly. Woodman said it became a necessity this year, when the paper mill where her husband worked closed and he became sick. A deli worker, she said she is scrimping and saving to afford Christmas gifts for her grandchildren.

“We’ll fight our way into the parking lots’’ and stores, she said pushing through the crowds with her daughter-in-law and son. “Even if we just save a couple bucks.’’