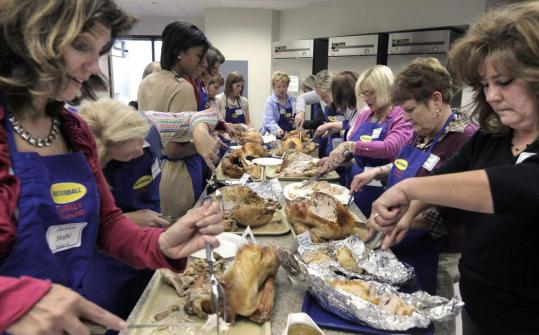 Butterball Turkey Talk-Line specialists took part in cooking and carving classes during day one of the 29th season of Butterball University in October in Naperville, Ill. Automated the rest of the year, the hot line goes live each November and December. (M. Spencer Green/ Associated Press)
By Emily Fredrix Associated Press / November 25, 2009

■ The woman who cleaned out her turkey with a scrub brush and asked if that was OK to do. (You don’t need to do that.)

■ People who thaw a turkey in the bathtub while washing their kids. (Don’t do that, either.)

■ A man looking for a quick way to cook his turkey who put it in the oven on the cleaning cycle. (Also not advisable.)

For Butterball, the nation’s top-selling turkey brand, preparing for such out-of-left-field calls is serious business.

Each year, Butterball LLC puts on Butterball University - this year, five days of training for newcomers to the hot line, which answers 12,000 calls on Thanksgiving Day alone.

Dozens of 3-inch-thick blue binders await trainees, all of whom are armed with degrees in nutrition, food science, or home economics. The binders are so stuffed with turkey information they weighed nearly as much as the bird itself.

Through the nearly three decades the Turkey Talk-Line has been around, thousands of people have called in frantic moments to ask its experts everything. These binders anticipate it all: cooking temperatures, thawing techniques, cooking times, meat thermometers, carving knives, turkey sizes, presentation tips, food safety concerns, and the eternal question of how much stuffing is too much.

“On Thanksgiving Day alone, there is never a point in time where we can stop. There’s always somebody waiting to talk to us,’’ said Nicole Johnson, who delayed her honeymoon in 2001 to work her first shift on the hot line.

The hot line (800-288-8372) functions year-round, mainly as an automated tip line. The goal is to position the nation’s best-selling turkey brand as the expert in the field.

But each November and December, the hot line goes live. Fifty-five operators are on hand for about 100,000 calls.

The dozen or so newer workers also learn about the brand from marketers from Butterball, which is based in Garner, N.C. Butterball is a joint venture of Maxwell Farms, LLC/Goldsboro Milling Co., and the pork producer Smithfield Foods Inc.

After a turkey overview that includes information on buying and thawing turkeys, trainees get the day’s main task.

Each is assigned a turkey and given directions to make it with a different method, from an open pan to a cooking bag. The idea is to be familiar with all the ways people might cook a turkey. Even in the microwave.

It’s not just about cooking ability. Turkey-making is just as much about confidence. That’s what Mary Clingman, director of the Turkey Talk-Line, likes to instill in her callers, many of whom are first-time turkey makers.

“As you go through these things step by step . . . they’re feeling better about themselves because they realize what they’re going to do is not as bad as they thought it was going to be.’’