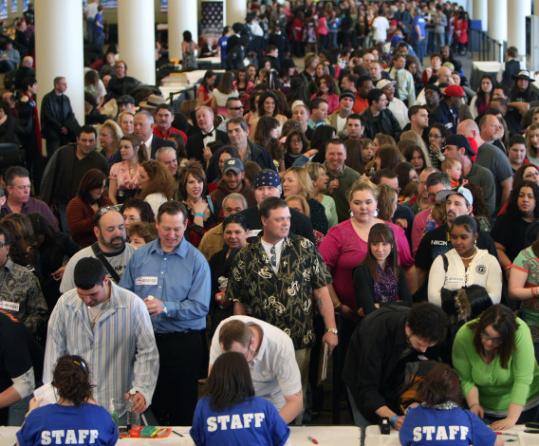 It may not seem like the best time to talk about a massive expansion for the Boston Convention & Exhibition Center.

The economic downturn has pummeled the convention industry for the past two years. The size, the number of exhibitors, and attendance have fallen in nearly every quarter, according to the industry publication Tradeshow Week.

Attendance at conventions and trade shows at the Boston Convention & Exhibition Center rose about 1.5 percent from fiscal year 2008 to 2009, after several years of double-digit growth, according to the Massachusetts Convention Center Authority. Nationally, attendance dipped about 7 percent during the same period.

Of course, the picture isn’t all that rosy in Boston. The number of nights that attendees at the Boston Convention & Exhibition Center stayed in local hotel rooms fell by 15 percent from fiscal year 2008 to 2009, an important measure of the overall economic impact of a convention because cities look for attendees to spend money by eating, shopping, and staying in local hotels. Local conventions have also been shorter: The number of occupied days at the convention center fell by 10 percent.

But the worst for the convention industry as a whole appears to be over, according to Tradeshow Week.

Attendance at conventions and trade shows improved across the country in the third quarter of this year - the best news the convention industry has had in almost two years. The national outlook for next year is also encouraging. After an 8.3 percent decline in revenue this year, Tradeshow Week is forecasting 3.3 percent growth in 2010.

“We probably are bottoming right about now,’’ said Michael Hughes, vice president of research and consulting at Tradeshow Week.

Boston’s expanded convention center could as much as double the size of the current 516,000-square-foot facility, the ninth-busiest convention center in the country (tied with Dallas). The top convention city is Las Vegas, which had 252 conventions and trade shows on its schedule this year. And a million square feet bumps Boston into the top tier - something Hughes calls “the mega category.’’ That kind of space means the center can market itself to an additional 200 to 300 conventions and trade shows, Hughes said.

Boston’s convention center needs to attract three to five big conventions each year - with around 20,000 attendees each - for the expansion to be considered successful, Hughes said. The extra space will also allow the convention center to hold more events simultaneously.

According to Tradeshow Week, convention center space has increased dramatically in the past two decades, growing 90 percent nationally. Hughes estimates that there are 50 expansion plans in the works.

Heywood Sanders, a professor of public administration at the University of Texas at San Antonio and a prominent critic of convention centers, is skeptical about the need for more space. He points to recent convention center expansions in Las Vegas and Orlando that generated minimal increases in business.

“The actual performance and the reality has been far, far less than the promises and forecasts,’’ he said. “And at the very least, that should raise the question about what an expansion might well do for Boston.’’

Even the Massachusetts Convention Center Authority’s James Rooney admits there is more supply than demand. But it’s a $122 billion industry, he said, and he wants Boston to get as much of it as it can, which means taking away business from other cities. “Boston’s gain,’’ Rooney said, “is somebody else’s loss.’’