The common wealth of Mass.

Firms base choice to expand here on quality work force 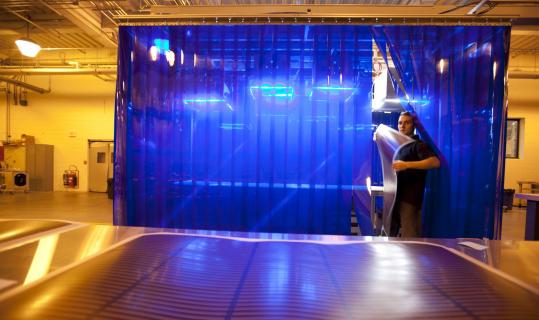 Konarka technician Paul Vallatini Jr. emerged with a solar panel from a room that replicates the midday sunlight to test the panels. (Rose Lincoln for The Boston Globe)
By Robert Gavin Globe Staff / November 21, 2009

After spending years developing plastic solar energy cells, Konarka Technologies Inc. of Lowell was ready to begin full-scale production of flexible films that could be incorporated into purses and backpacks to create solar chargers for electronic devices. Needless to say, several states were interested in having the company build a factory there.

Konarka, however, chose New Bedford, where it found a former Polaroid plant with equipment suited to rolling out its thin films. But more important, said Konarka chief executive Rick Hess, the company was able to hire former Polaroid workers who had the skills to do it.

“We got a manufacturing team with the right capabilities,’’ Hess said. “And certainly, Massachusetts is the right place to be to hire the chemists and scientists that can help us advance our technology.’’

Konarka, which acquired the New Bedford plant earlier this year, is the kind of Massachusetts company that often seems to get overlooked: one that is expanding and adding workers in the state. While recent headlines have focused on such firms as Watertown battery maker A123 Systems Inc., which is locating manufacturing operations to Michigan, or Marlborough solar panel manufacturer Evergreen Solar Inc,. which is moving some production to China, many local companies are finding what they need to grow right here.

On Tuesday, the Massachusetts Alliance for Eco nomic Development, a nonprofit development group, will recognize 17 of these companies, including Konarka, with its annual Economic Impact awards. Over the past 18 months, those firms have added an estimated 2,000 jobs and invested more than $500 million in plants and equipment across an array of industries, according to the alliance.

At Konarka, Lexington biotech AMAG Pharmaceuticals Inc., and high-end envelope maker Elite Envelope and Graphics Inc. of Randolph, all among the honorees, executives say Massachusetts workers provide a competitive advantage not readily found elsewhere. That, they said, made it an easy decision to expand right here.

“You may be able to go out of state and get a workforce at 20 to 30 percent less, but you’re not going to get the same quality,’’ said David Theriault, president of Elite Envelope, which recently completed a $3 million renovation of a building in Randolph after outgrowing its Braintree plant. “There are really talented printers and mechanics and an incredibly skilled workforce to draw on. That’s what led us to stay in Massachusetts.’’

The Bay State, of course, is not the easiest place to do business. Throughout state history, its economy has had to meet competitive challenges from regions with lower costs, better weather, and greater natural resources. The key has been its people, said Michael Goodman, a professor of public policy at the University of Massachusetts-Dartmouth.

“From its very founding, Massachusetts has always relied on its highly innovative population and its Yankee ingenuity,’’ Goodman said. “This combination has made it very attractive for cutting-edge firms.’’

AMAG, for example, was founded in 1981 to develop and commercialize iron compounds. Its first products were administered to patients to enhance images of organs produced by magnetic resonance imaging machines, or MRIs. Its latest product, used to treat iron deficient anemia, recently received final approval by the US Food and Drug Administration. As a result, AMAG has more than doubled its Massachusetts workforce to about 200, including its manufacturing operation, which has grown to more than 50 workers from about 25. Last year, it expanded into a new headquarters in Lexington, investing about $4 million.

“Among the reasons that we have continued to expand is we have access to high quality, educated employees, many with biotech and pharmaceutical backgrounds,’’ chief financial officer David Arkowitz. “Our intellectual capital resides here in Massachusetts, and it’s too precious to relocate.’’

Certainly, the state could do more to improve the business climate and help firms grow here, executives said. Additional tax breaks for manufacturers, lower health care costs, and streamlined local permitting processes were among the suggestions.

In addition to these and such traditional measures as improving education and keeping tax rates competitive, Massachusetts Housing and Economic Development Secretary Gregory Bialecki said the state can also call attention to its successful firms.

“If you’re a successful tech entrepreneur in California, you’re a celebrity. In Massachusetts, you’re not,’’ Bialecki said. “It does matter that the state recognizes what great companies and industries we have, and that’s something that will attract and retain more companies. “