No obvious links to recovery in some grants to Mass.

The funds will furnish the party cruise vessel with an alarm and surveillance system and other security features.
By Jenn Abelson Globe Staff / November 19, 2009

There’s $1.5 million to fix a remote lighthouse on uninhabited Monomoy Island, off Cape Cod. Security measures to protect the Spirit of Boston party cruise ship from terrorist attacks will cost about $123,000. And the University of Massachusetts at Boston received nearly $95,000 to study pollen samples from the Viking era in Iceland.

Those are some of the Massachusetts projects being funded with taxpayer money under the federal stimulus law, according to a Boston Globe review of recently filed reports.

Congress approved stimulus funding to jump-start the economy, mostly by creating jobs, but also by paying for existing public services and cutting-edge research. In many cases, the $3.9 billion awarded in Massachusetts is financing precisely such ventures.

But millions of dollars are going to investments that seem further afield from the stimulus plan’s mission.

Massachusetts school districts, for instance, bought window blinds, photocopiers, and a cafeteria dishwasher, and the Patrick administration recently came under fire for proposing to use $9 million to build a pedestrian bridge connecting parking lots near Gillette Stadium in Foxborough.

Elsewhere around the country, instances of stimulus money being spent on Taser guns, a riding lawnmower, and even a freezer for fish sperm have sparked criticism that the legislation is a boondoggle. The newly released reports raise more questions about how taxpayer dollars are being allocated.

“Spending funds with borrowed money for low-priority projects is neither wise nor desirable,’’ said Roger B. Porter, IBM Professor of Business and Government at Harvard University. “Some of this sounds like money in search of a purpose.’’

In many cases, government agencies had wide discretion while doling out stimulus funds. Medical and science grants, for example, were typically awarded based on the agencies’ normal criteria, and not subjected to special conditions regarding their economic potential.

Critics say there was too much pressure on government officials to inject funds into the economy quickly, without regard to whether the projects would truly be beneficial.

“There was not a lot of scrutiny in awarding the stimulus grants,’’ said David Williams, vice president of policy for Citizens Against Government Waste, a watchdog group in Washington, D.C.

“People are scratching their heads because some of this doesn’t make sense. Studying pollen during the Viking Age isn’t going to create a lot of jobs and help the economy.’’

Ed Pound, director of communications for the Recovery Accountability and Transparency Board, the federal government’s oversight panel for stimulus money, acknowledged there have been questionable uses of the funds. In response, he said, the agency has made “significant referrals’’ to the inspectors general of federal agencies.

But Pound declined to provide specifics, and would not comment on whether the money was handed out too quickly, without adequate oversight.

“It’s a work in progress,’’ he said of the stimulus funding.

Passed by Congress in February, the $787 billion package was sold as a critical strategy at a time when the economy was sinking fast. Since then, money has flowed to state and local governments, universities, hospitals, nonprofit organizations, and businesses with the expectation it would save existing jobs and create new ones.

The Globe previously reported that the 12,374 jobs claimed so far by Massachusetts recipients of stimulus money is wildly exaggerated, and includes numerous instances of miscounted positions, erroneous figures, or new jobs claimed for work that has not yet begun.

Some applicants acknowledged they did not seem to be likely candidates for stimulus money.

Entertainment Cruises Inc., the owner of the Spirit of Boston, was awarded nearly $1 million from the Federal Emergency Management Agency to protect the company’s vessels from terrorists in Boston, New York, Philadelphia, Washington, D.C., Norfolk, Va., and Chicago, under a program to increase port security. The $123,000 designated for its Boston boat will pay for an alarm and surveillance system, among other security measures, said Gary Frommelt, vice president of marine operations.

“We feel that we’re really a low threat for a terrorist incident,’’ Frommelt said. “But the stimulus was a nice perk.’’

A spokeswoman for the Department of Homeland Security said it accepted 218 of the eligible 420 grant applications, and owners of US-inspected passenger vessels, such as Entertainment Cruises, were encouraged to apply.

Academic researchers in Massachusetts also have benefited from stimulus funding for an eclectic assortment of projects, including studying circadian clocks of monarch butterflies, researching tusks of the Narwhal whale in the Arctic, and developing a colony of robotic bees. While scientific studies do not usually focus on job creation, such work can boost employment for researchers and assistants.

UMass Boston said stimulus money from the National Science Foundation created a job for a graduate assistant to help count pollen grains collected from farms in Iceland and allowed researchers to continue studying the role the arctic environment played in the evolution of civic life during the Viking Age.

Dana Topousis, a spokeswoman for the foundation, said 80 percent of the stimulus grants it oversaw went to previously received proposals that met typical requirements and were highly rated by merit review panels. The foundation did not set additional stipulations, but gave priority to applications that included new researchers.

Topousis said the Viking research was “reviewed by peers and determined to be a grant worth awarding.’’

Some watchdogs have questioned the wisdom of letting universities, museums, and businesses use stimulus money to pay for projects they could have afforded on their own.

Harvard received scores of stimulus grants, many for top-level research, but it also got $100,000 to buy a high-end microscope. While acknowledging the equipment would not bring new jobs, Harvard spokesman Kevin Casey said the purchase “would have a very obvious economic impact’’ by boosting revenue for the company that made it.

Repairing the Monomoy Point Lighthouse is not directly tied to job creation, either.

Located on a sandy barrier island accessible only by boat, Monomoy is a federal wilderness area that has been unoccupied for decades. The $1.5 million it is receiving will be used to repair the lighthouse, shed, and keeper’s house and open the facility to the public, according to the Fish and Wildlife Service.

“We think it’s a great use of recovery funds,’’ said Libby Herland, who manages refuges for the agency in Massachusetts.

While it may be difficult for taxpayers to get to Monomoy to see their money at work, motorists may have a better view of where other stimulus money is going.

The state has erected about 66 road signs - paid for with stimulus money - at highway construction sites that are being funded by stimulus money.

Michael J. Widmer, president of the Massachusetts Taxpayers Foundation, said such spending - even when it’s relatively modest - is frustrating.

“There’s enough skepticism about whether federal stimulus dollars are helping,’’ he said.

“These signs just serve as an indication that they may be wasting money. It’s gratuitous, and it undercuts the credibility of the stimulus funds.’’ 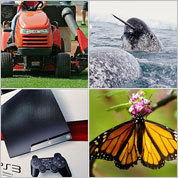 The strange uses for
stimulus funds in Mass.

$123,000 SPIRIT OF BOSTON
The funds will furnish the party cruise vessel with an alarm and surveillance system and other security features.
$1.5 MILLION MONOMOY POINT LIGHTHOUSE
The remote facility off Cape Cod will be repaired and opened to the public.
NEARLY $95,000 ICELANDIC POLLEN
UMass researchers will continue their study of the arctic environment.