All’s fare in travel by bus 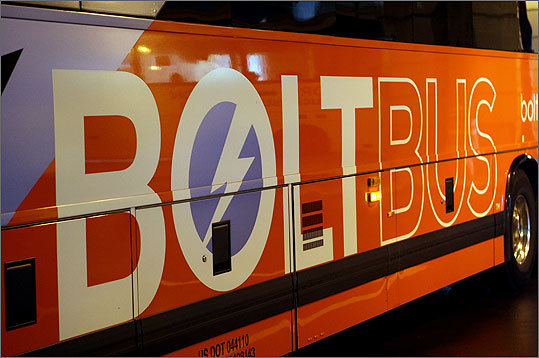 (David L. Ryan) BoltBus and other new-on-the-scene bus carriers are trying to get the upper hand on the Boston-New York route.
By Katie Johnston Chase Globe Staff / November 17, 2009

Even before he took the bus, Northeastern University student Jimmy Okuszka knew he’d like it better than the train. The last time he made a visit to his family in New Jersey, it was on Amtrak, but when he learned the BoltBus service from Boston had free wireless Internet access, he made the switch.

“I kind of got a little bored last time just watching movies [on my laptop] and not being able to go on the Internet,’’ said Okuszka, 18, as he waited in line to board the bus at South Station, on his way to visit a friend at Rutgers University. Never mind that he had to transfer to a train once he got to New York; for most of the trip, he would be able to e-mail friends and check out his favorite websites. It didn’t hurt that he paid only $30 on Bolt for a round-trip ticket to New York, compared with the $100 price tag for the train.

Long-distance bus ridership in the United States is estimated to be up about 10 percent since last year, according to Joseph Schwieterman, director of the Chaddick Institute for Metropolitan Development at DePaul University, which conducts an annual survey of the bus industry. The number of passengers traveling by air and train, on the other hand, was down about 8 percent for the first eight months of the year, according to numbers from the Bureau of Transportation Statistics and Amtrak. Bus tickets are more affordable, and many bus companies also offer something that most trains and planes don’t - free wireless Internet access - which is attracting not only business travelers, but a legion of young riders used to having the Web at their fingertips.

The two newest companies to offer service on the ultracompetitive Boston to New York bus route - Megabus and BoltBus - are reporting increases in passenger counts since they began making the trip a year and a half ago. Both outfits offer fares that range from $1 to $15 for a one-way trip to New York, compared with as much as $21 on Peter Pan or Greyhound.

The six companies that serve the Boston-to-New York route do not release passenger numbers, but all said demand appears to be stable or growing. Megabus president Dale Moser said ticket sales are up 67 percent on the route since last year, largely from new riders. “It’s about creating a new demographic of bus traveler,’’ he said. That demographic is young, with 56 percent of Megabus travelers aged 18 to 34, and tech-savvy.

BoltBus, which is co-owned by Greyhound and Peter Pan, caters to a similar clientele and has seen an increase in passengers each month since its inception, said spokesman Timothy Stokes. As for Greyhound itself, the numbers are about the same as they were last year, said Stokes. Peter Pan executive vice president Robert Schwarz would only say he was “very pleased’’ with the company’s ridership, compared with last year. Chinatown bus companies Fung Wah and Lucky Star did not return calls seeking comment.

This year’s Chaddick Institute study, which will be released next month, will for the first time track the use of digital technology on the bus, and early indications are that it’s fairly widespread. On one trip taken by a Chaddick researcher between Chicago and Milwaukee last month, 65 percent of the passengers were using some form of technology. On average, about 35 percent of travelers used cellphones, iPods, or laptops on the bus, said researcher Susan Urbanczyk.

Bus companies were the first national mode of transportation to offer unlimited free WiFi, Schwieterman said. BoltBus started to do so when it launched in March 2008, and Megabus, launched in the Midwest in 2006, had free WiFi on all its buses by last fall. The pioneers of the bus business - Peter Pan and Greyhound, which have a partnership in the Northeast - have also gotten into the game, although Greyhound is outfitting only its new buses with wireless access. Peter Pan and Greyhound are also equipping their new buses with another amenity: seat belts.

According to the number of tickets sold over the summer through the bus ticket search engine BusJunction, which will not publicly release actual numbers, Megabus is the most popular bus line on the Boston-New York route, and the cheapest.

BoltBus is the second most popular company on BusJunction, followed by Fung Wah, Greyhound, and Lucky Star.

Peter Pan, which had the highest average ticket price, came in last.

Okuszka said the hours flew by as he surfed the Web on his first BoltBus trip, and he has already booked his next one - this time to see his parents for Thanksgiving.

© Copyright 2009 Globe Newspaper Company.
Survey Travel between
Boston and New York?
Your comment is subject to the rules of our Posting Policy
This comment may appear on your public profile. Public Profile FAQ