Many told to expect double-digit jumps 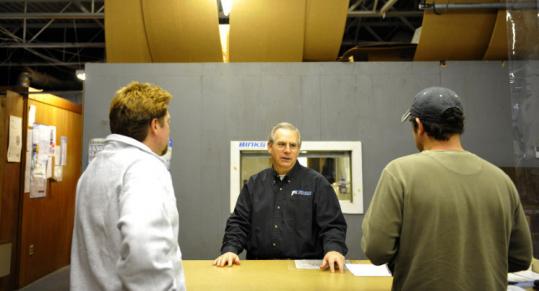 Bob Carroll, owner of a Billerica distributor of paint spraying equipment, recently got some really bad news from Blue Cross-Blue Shield: His company’s health insurance rates are going up 47 percent in January.

So did Dan Greenbaum, president of a research firm in Boston, who’s been told to expect a 35 percent jump. And Sandy Bouchard, chief financial officer at Coady’s Towing Service in Lawrence, is trying to fathom a 28 percent hike - an extra $58,000 - in 2010.

“We’re a small company, and that’s a huge raise,’’ said Bouchard. “How much more can you expect an employer and its employees to contribute?’’

At a time when both the state and the nation are struggling to rein in health care costs, many small businesses in Massachusetts say they’re receiving the largest premium increases in years for their Jan. 1 renewals. Insurers in September said they expect to raise premiums an average of 10 percent next year, but some employers are facing increases that are double or triple that - or even higher.

While all of the state’s health insurers have been jacking up rates for small businesses, which lack the negotiating might of larger enterprises with hundreds or thousands of employees, some of the steepest increases have been coming from Blue Cross and Blue Shield of Massachusetts. The Boston insurer, the state’s largest, has in the recent past offered lower base rates than many of its rivals.

As for the small employers that have received the steepest increases, “something else is going on,’’ he said. Their mix of employees may have changed, with younger workers let go during the recession, leaving an older workforce that costs more to cover. Carroll, for example, reduced the workforce at his paint equipment business from 11 to seven workers as the economy slowed.

Still, small businesses, historically the biggest engine of job growth in Massachusetts, are crying foul. “We bear the brunt of all cost increases,’’ said Carroll, president of Norris Wiener/Bay State Spray Equipment in North Billerica, which sells machines that coat and finish anything from golf balls to furniture. “It makes it impossible to grow. Every time you want to hire employees, your health costs go up.’’

Carroll said his company already has responded to the proposed Blue Cross premium increase by switching to a competing insurance carrier, Fallon Health Plan of Worcester.

Andover insurance broker Jim Edholm, who helps small businesses choose plans, said about a dozen of his clients who have Blue Cross plans face increases of 20 percent to 45 percent Jan. 1.

According to Blue Cross, the majority of its customers have been redesigning their plans through “buydowns,’’ which use higher deductibles and other features to shift more of the cost to employees.

While it has not completed setting its rates for next year, Blue Cross estimates that small businesses that change their plan designs, and have a “stable’’ age mix in their workforces, will see average premium increases of 10 percent to 12 percent. For those that choose to keep their current more generous plans, the insurer’s estimates are closer to 15 percent to 18 percent.

Businesses receiving increases of 25 percent or higher, Maltz said, are outliers that typically are trying to stay with their current plans despite having some kind of change in the demographics of their insured. He declined to discuss the cases of individual customers.

“The main driver in insurance premiums is the cost of health care,’’ Maltz said. Another factor, he said, is the state universal health care law, which has compelled insurers to merge newly insured individuals - a high-cost group - into small-business insurance plans.

With government capping reimbursements for Medicaid and Medicare, health care providers are seeking to make up the difference from private insurers, who pass the higher costs onto businesses. “There’s a cost shifting going on,’’ said Vincent M. Graziano, vice president at the benefit consulting firm Segal Co. in Boston, which advises larger employers. “Small business usually bears the highest costs because they don’t have the same clout as the big companies.’’

How insurers set rates for employers, including small businesses, is one of the subjects of public hearings being held throughout November by the state Division of Insurance.

Edholm, who offers insurance advice to high-tech startups, law and engineering firms, machine shops, and other businesses with fewer than 200 employees, said many have transitioned in recent years to cost-saving “high deductible’’ plans. Such plans allow employers to pay lower premiums, but require employees to pay deductibles of $1,000 or more for hospital visits.

Insurers such as Harvard Pilgrim Health Care of Wellesley and Tufts Health Plan of Watertown offered high deductible plans before Blue Cross, which sought to pick up market share by offering a discounted plan last year. The insurer wound up badly underestimating its costs and losing money, insurance brokers said. They said many in the industry view Blue Cross’s outsized increases to some small businesses next year as an effort to recoup those losses.

Maltz acknowledged that Blue Cross lost money in 2008 on some high deductible plans for small businesses. But he strongly denied the insurer is trying to make up for it now with higher premiums. “Each year stands on its own, and we try to set the rates right,’’ he said. “We never try to set premiums to recoup losses from a prior year.’’

But that is small comfort for businesses faced with huge jumps in their insurance rates. Greenbaum’s research firm, Health Effects Institute, already pays about $14,000 per employee to cover its 25-person staff. The proposed 35 percent increase by Blue Cross has sent the firm scrambling to look for an alternative plan or carrier.

Greenbaum, whose firm studies the health effects of air pollution and helps to set emissions standards around the globe, said he and his management staff have had to take time away from research to focus on the arcane details of insurance changes.

“We feel whipsawed by whatever the insurance companies do,’’ he said. “We obviously can’t just eat a 35 percent increase,’’ he said. “I just don’t understand how they can come forward with that. It almost seems like they’re trying to push out the small employers.’’

For start-ups and ventures without much operating history, a good business plan starts with these things.
Your comment is subject to the rules of our Posting Policy
This comment may appear on your public profile. Public Profile FAQ