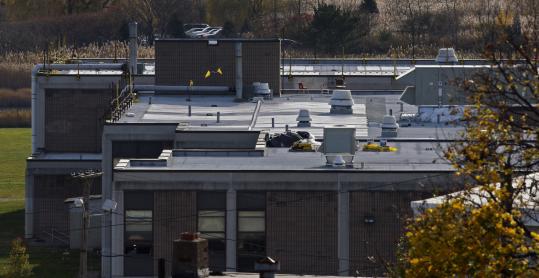 Revere spent $485,500 in stimulus funds to install solar panels on the roof of the Beachmont School and claimed to have created 64 jobs on the project. (Jim Davis/Globe Staff)
By Jenn Abelson and Todd Wallack Globe Staff / November 11, 2009

While Massachusetts recipients of federal stimulus money collectively report 12,374 jobs saved or created, a Globe review shows that number is wildly exaggerated. Organizations that received stimulus money miscounted jobs, filed erroneous figures, or claimed jobs for work that has not yet started.

The Globe’s finding is based on the federal government’s just-released accounts of stimulus spending at the end of October. It lists the nearly $4 billion in stimulus awards made to an array of Massachusetts government agencies, universities, hospitals, private businesses, and nonprofit organizations, and notes how many jobs each created or saved.

But in interviews with recipients, the Globe found that several openly acknowledged creating far fewer jobs than they have been credited for.

One of the largest reported jobs figures comes from Bridgewater State College, which is listed as using $77,181 in stimulus money for 160 full-time work-study jobs for students. But Bridgewater State spokesman Bryan Baldwin said the college made a mistake and the actual number of new jobs was “almost nothing.’’ Bridgewater has submitted a correction, but it is not yet reflected in the report.

In other cases, federal money that recipients already receive annually - subsidies for affordable housing, for example - was reclassified this year as stimulus spending, and the existing jobs already supported by those programs were credited to stimulus spending. Some of these recipients said they did not even know the money they were getting was classified as stimulus funds until September, when federal officials told them they had to file reports.

“There were no jobs created. It was just shuffling around of the funds,’’ said Susan Kelly, director of property management for Boston Land Co., which reported retaining 26 jobs with $2.7 million in rental subsidies for its affordable housing developments in Waltham. “It’s hard to figure out if you did the paperwork right. We never asked for this.’’

The federal stimulus report for Massachusetts has so many errors, missing data, or estimates instead of actual job counts that it may be impossible to accurately tally how many people have been employed by the massive infusion of federal money. Massachusetts is expected to receive an estimated $1 billion more in stimulus contracts, grants, and loans.

The stimulus bill - a $787 billion package of tax breaks, expanded government benefits, and infrastructure improvements - was signed into law in February by President Obama, who said it would create and save jobs by preserving local government services and spurring short- and long-term economic development.

To be sure, the legislation has accomplished an important goal: funding public services facing the ax after the recession created gaping shortfalls in state and local government budgets. So Worcester and Lynn, for example, were able to keep police officers targeted for layoffs, schools across the state lost far fewer teachers, and community agencies preserved staff in the face of mounting demands for social services.

The president also said the legislation demanded an unprecedented level of accounting from recipients, who report on the uses of the money and the jobs via a massive online system, www.Recovery.gov.

Recipients said they found the reporting system confusing, leading them to submit information erroneously, and leaving them unable to correct mistakes in their reports. Additionally, the government files are massive and unwieldy. Reports do not distinguish between newly created positions and those that were “retained.’’

“We see $15 million construction projects with no jobs, and a $900 shoe sale that created nine jobs. Both are obviously wrong,’’ said Michael Balsam, chief solutions officer for Onvia, a Seattle data company tracking the stimulus spending. “There were a lot of recipients that did not report. Those that did report have some data challenges - wrong data or missing data.’’

Cheryl Arvidson, assistant director of communications for the Recovery Accountability and Transparency Board, the federal government’s oversight panel for the stimulus money, acknowledged the problems recipients are having reporting job counts.

“Some people are going to be confused. Some people are manually entering data. We figured there would be innocent mistakes,’’ Arvidson said. “We anticipate that as we go forward . . . the data quality will be increasingly improved. We knew there was going to be a shake-out.’’

Some of the errors are striking: The community action agency based in Greenfield reported 90 full-time jobs associated with the $245,000 it got for its preschool Head Start program. That averages out to just $2,700 per full-time job. The agency said it used the money to give roughly 150 staffers cost-of-living raises. The figure reported on the federal report was a mistake, a result of a staffer’s misunderstanding of the filing instructions, said executive director Jane Sanders.

Some agencies that received stimulus money reported jobs for work that had not started. The Greater Lawrence Family Health Center reported 30 construction jobs “have been created,’’ even though it hadn’t begun construction on a $1.5 million renovation and expansion. Grant administrator Beth Melnikas said the health center does expect to hire 30 workers.

There was often variance among recipients of the same source of funding. Some did not report any positions retained; others did. Some used different methods and got different results.

For example, the City of Waltham said a $630,500 solar panel installation on the roof of City Hall created 10 jobs - even though the work had yet to begin. Revere spent $485,500 in stimulus funds to install solar panels on the roof of a city school. Revere’s job count? 64.

The city’s project consultants used a different formula than the one the federal government recommended.

“If not for this stimulus money, we would not have done the solar panel roof,’’ said Revere Mayor Thomas G. Ambrosino. “A lot went into this.’’

Another source of confusion over the job counting is because Congress this year labeled as stimulus initiatives several longstanding programs, such as student work-study and low-income rental subsidies, that it otherwise regularly funds in annual appropriations bills. In some cases Congress increased the funding amount, too, so the stimulus legislation was a vehicle for expanding government support for people in need.

Regardless of its label, the recipients treated the funding as business as usual. Only in September, when government officials told them they had to report on their stimulus spending, did they confront the issue of how to account for jobs associated with the money they received.

Massachusetts property owners received $75.5 million in rental subsidies from the stimulus bill, for a reported total of 437 jobs. Recipients of 27 of the 87 contracts reported zero jobs. The others, meanwhile, simply reported the number of employees working at the property. If they received two contracts, for a larger property, they reported the employee figure twice.

For example, Plumley Village East in Worcester listed 23 jobs for each of its two contracts for a total of 46 jobs, even though it has only 23 employees working throughout the complex.

“There was some confusion about what they were really looking for,’’ said Karen Kelleher, general counsel for Community Builders Inc., which runs Plumley Village.

Those overstated jobs are going to disappear from future counts. The Obama administration has recently determined the rental subsidies don’t have to be reported under the stimulus bill.

One of those property owners, meanwhile, is frustrated by his experience with the legislation. Robert Ercolini manages a 201-unit affordable housing development in Plymouth. After being notified his annual rental subsidies were classified as stimulus spending, Ercolini renewed a request to the US Department of Housing and Urban Development for more than $1 million to fix up the property, reasoning he would be creating jobs by hiring contractors. He was refused.

“After HUD denied me money to make needed improvements and actually create jobs,’’ Ercolini said, “it’s really funny to find out in September that I’ve been receiving stimulus funds all along and they want to know how many jobs we’ve saved or created.’’

Projects claiming to create the most jobs