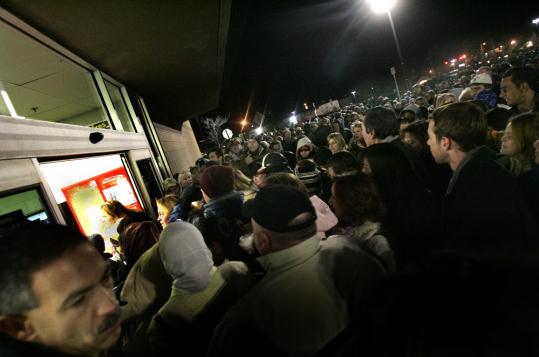 A crowd surged into the Danvers Wal-Mart on Black Friday in 2005. The discounter has new plans for crowd control this year. (Globe File Photo/ 2005)
By Chris Burritt Bloomberg News / November 10, 2009

GREENSBORO, N.C. - Wal-Mart Stores Inc. has developed plans to manage holiday crowds shopping at its 3,500 US stores after an employee died in a “Black Friday’’ trampling a year ago.

Wal-Mart, the world’s largest retailer, consulted with sports and entertainment safety specialists to handle shoppers waiting to enter its stores, David Tovar, a company spokesman, said yesterday. The plans, specific to each store, also help direct the flow of shoppers when they are in the stores, check out, and leave, he said.

The Nov. 28, 2008, death of Jdimytai Damour, a temporary worker trampled as he manned the front doors of a Wal-Mart store in Valley Stream, N.Y., was one of several incidents in the past year leading some retailers to increase safety precautions, National Retail Federation executives said.

Jockeying for discounted merchandise may intensify during the holidays as rising unemployment makes consumers more desperate for bargains and retailers deepen markdowns to spur sales, they said.

The holiday season traditionally starts on the day after Thanksgiving, so-called Black Friday, which falls on Nov. 27 this year.

In May, Wal-Mart agreed to a crowd control plan for Black Friday events at its New York stores to avoid prosecution in Damour’s death.

The agreement with Nassau County District Attorney Kathleen Rice didn’t include an admission of guilt or wrongdoing by the retailer.

Some retailers are holding dress rehearsals to test their safety plans before the holidays, said Rhett Asher, the National Retail Federation’s vice president of loss prevention.

The federation recommended that merchants and shopping malls coordinate crowd control with local police, assign employees to interact with shoppers waiting in line, and spread discounted merchandise throughout their stores to avoid herding.