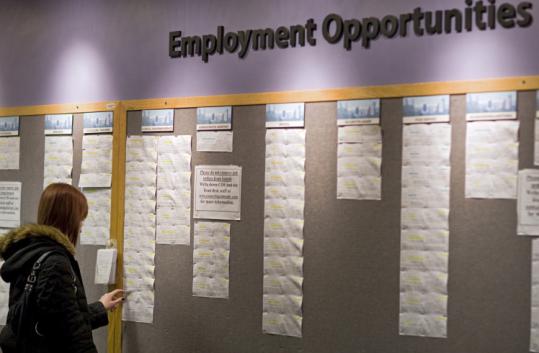 The $24 billion bill would help more than 1 million jobless people who will run out of benefits by the end of the year.
(Matthew Staver/Bloomberg News
)
By Jim Abrams Associated Press / November 5, 2009

WASHINGTON - Recognizing that a weak economy still needs a government boost, the Senate voted overwhelmingly yesterday to provide the jobless with up to 20 weeks in additional unemployment benefits and expand a first-time home buyer tax credit to include a far larger pool of people entering the dormant housing market.

The $24 billion bill, passed 98-to-0, also provides tax relief for struggling businesses. It comes to the rescue of more than 1 million out-of-work people who will run out of benefits by the end of the year. Everyone will receive 14 weeks of additional benefits, while those in states with unemployment rates of 8.5 percent and above get six weeks on top of that.

With enactment, the jobless in the hardest-hit states could receive up to 99 weeks of benefits, which average about $300 a week. That would well exceed the previous record of 65 weeks during the 1970s.

The $8,000 tax credit for first-time home buyers, enacted as part of the stimulus package last February and set to expire this month, would be extended and expanded to include a $6,500 credit for people who have lived in their current residences at least five years.

Congress has no choice but to act when there are 15 million jobless chasing 3 million jobs and 7,000 people run out of benefits every day, said Senate Finance Committee chairman Max Baucus, a Montana Democrat. Economists talk about the end of the recession, he said, but “for most Americans, it will still be some time before things start getting better.’’

The legislation now goes to the House, which is expected to quickly approve it and send it to President Obama for his signature.

Massachusetts senators John F. Kerry and Paul G. Kirk Jr. said in a joint statement that the extension would help up to 40,000 Massachusetts residents.

“This extension of a critical safety net will make it easier for families across Massachusetts to hang on in the toughest economy since the Great Depression,’’ Kerry said.

“With the unemployment rate unacceptably high and the winter months approaching,’’ Kirk said, “impossible decisions about whether to turn on the heat or put food on the table loom in many households. Passage of the unemployment insurance benefits extension will provide greater hope to those who continue to search for work during these harsh economic times.’’

The House acted in late September to extend unemployment benefits, but only in the 27 states where the unemployment rate is above 8.5 percent.

The bill bogged down in the Senate, first when senators from states with lower jobless rates demanded that the extension apply to all people exhausting their benefits, then with negotiations over adding the home buyer and business tax credits. Then, Republicans held up floor action when Democrats blocked them from offering amendments on matters unrelated to the base bill.

“Opponents have put up obstacles at every turn to delay the passage of this bill, and as a result of these delaying tactics approximately 200,000 workers have lost their benefits in this last month,’’ said Senator Jeanne Shaheen, a New Hampshire Democrat.

In addition to the jobless benefits, the legislation would extend the $8,000 tax credit through June as long as the buyer enters into a binding contract before April 30. It doubles the income ceiling for qualification to $125,000 for individuals.

The measure also strengthens the ability of the IRS to stop people who are not eligible for the program from filing fraudulent claims.