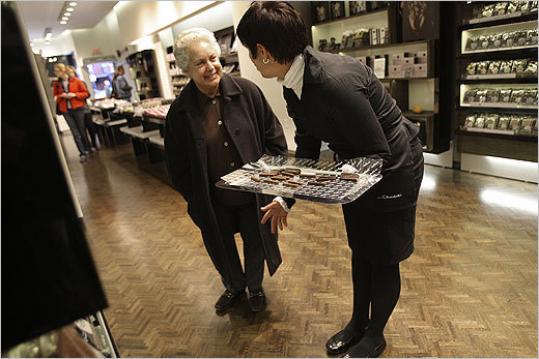 There are teapots galore, sweets with names like Tiddly Pots and Smiley Licks, and mannequins draped in the red and blue Union Jack.

“Newbury Street has a feeling of Europe and merchants abroad are willing to try and test out the market here with the exchange rate and the rents down 15 to 20 percent compared to two years ago,’’ said Tom Brennan of C. Talanian Realty Co. on Newbury Street. “There’s a lot of good spaces available.’’

Outside Hotel Chocolat, a bicycle with a British flag beckons consumers inside where employees serve up samples of milk and dark chocolate on silver platters. Hotel Chocolat selected Newbury Street to launch its first US store and showcase the merchant’s vast assortment of rich sweets with a “British sense of humor,’’ according to Nicki Doggart, Hotel Chocolat’s US chief executive. These include chocolates shaped like antique buttons, vintage chocolate bars made from a single estate cocoa harvest, and chocolate pasta.

“Newbury Street is Boston’s preeminent luxury and style brand shopping destination. Boston’s sophisticated palate for chocolate and their enthusiasm for our arrival is evident in our very strong sales,’’ Doggart said.

She added that the influx of British retailers has helped create a distinctive shopping experience for the holidays and her fellow English merchants are bonded by their British heritage.

Confronted with a drop in sales and a rise in already high rents, boutiques, galleries, and even chain stores have exited Newbury Street over the past year. In one four-block stretch, there are now at least 16 vacancies. Another gaping hole is expected on what is considered Boston’s most coveted retail address next spring when Louis Boston leaves its space at the corner of Newbury and Berkeley streets.

“It’s a wasteland here compared to what it was last year,’’ said Nancy Michel of Brookline. “For these British merchants, the weak dollar is a benefit to them. Maybe they’ll be able to make it here.’’

Michel made her second visit to Hotel Chocolat yesterday since the store opened in September. She left with an $8 box of chocolates and the hope that the store would be a success after all the recent failures along Newbury Street.

City officials point to nearly a dozen openings over the past year, including a fourth British brand that opened last year, lingerie maker Agent Provocateur, as proof of the Newbury appeal. And new merchants appear to have a sense of optimism.

“Newbury Street is extremely well regarded for international brands and if you are thinking of coming to Boston, you will invariably have to look at Newbury Street as a serious contender,’’ said Craig Smith, a spokesman for Ted Baker, which features a Mad Hatter theme at its Newbury store hawking $1,000 velvet blazers and $700 wool coats. “Class is permanent as they say.’’

Down the street at Ben Sherman, teapots hang from the ceiling and a copy of Elle magazine sits on a table lauding the designer as “Brit Chic.’’ The red and blue Union Jack is featured on everything from leather handbags to T-shirts, or shoppers can stick with simple red and blue striped suspenders for $30.

“We clearly are not alone in our choice of Newbury Street amongst leading British brands,’’ said Miles Gray, Ben Sherman’s chief executive. “Seems like the British are returning to Boston!’’