Their motto: Grow or die 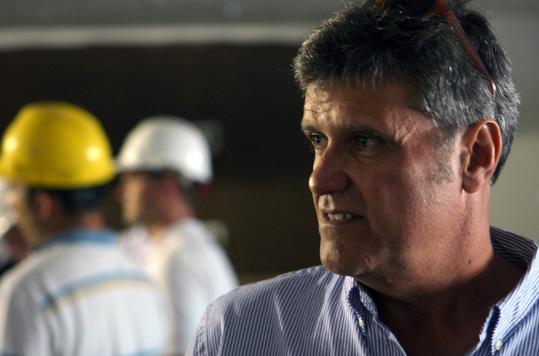 DEDHAM - Sampling the menu recently at his newest venture, Patrick Lyons called the chefs out of the kitchen to tell them the wings were too wet, the potstickers were too dry, and the mound of slaw with the cheeseburger spring rolls was too big.

Attention to detail has served Lyons well in his three decades in the nightlife and restaurant businesses, during which time he has dreamed up a stream of diverse concepts, from Kings bowling alleys to the Axis/Avalon club complex to the Newbury Street celebrity haunt Sonsie.

All told, he is involved in 26 venues, and despite a recession that has others scaling back, Lyons Group opened a pub on Lansdowne Street in the spring and a Kings bowling alley in Dedham last month. It is planning three more restaurants in coming months: a Summer Shack in Hingham, an international bistro in the Hynes Veterans Memorial Convention Center in Boston, and a gastro-pub in the Boston area.

“Grow or die,’’ said Lyons, a self-described “creature of culture’’ who ditched community college after 40 minutes and always has his eye out for the next big thing. “When there’s a seismic shift going on, that’s when I’ll stick my finger in the mix.’’

Lyons’s partner from the beginning has been Ed Sparks, a certified public accountant he met while trying to get free records for his club from Sparks’s Hingham music store. Sparks suggested buying the property that started it all - Boston-Boston on Lansdowne Street, a disco Lyons was managing, in 1981; the pair transformed the complex several times before selling the lease to House of Blues Entertainment Inc. last year.

Sparks, who handles the money, and Lyons, who supplies the vision, are the principals of Lyons Group, which provides accounting and administrative services to each venue; Lyons and Sparks are shareholders in each independent business. Operating out of the cramped maze that serves as the company’s headquarters on Lansdowne Street, the fiftysomething Lyons and sixtysomething Sparks have had a hand in some of the biggest clubs in Boston, including Paradise, Hard Rock Cafe, and the original House of Blues in Cambridge.

They won’t reveal the value of their collective businesses, which employ about 2,000, but Lyons said he almost hit his goal of having a $50 million empire by age 35.

Lyons Group has also had its share of growing pains. Lyons and Sparks abandoned a plan to go national in the early 1990s after the company they were partnering with was sold, and they got out of the House of Blues chain when they realized all the traveling was having a negative effect on their Boston business.

So the duo have stuck to building a regional company, sifting through the hundreds of proposals developers submit each year. They have branched out to Atlantic City and Mohegan Sun casinos, and now to the suburbs; more Kings, Summer Shacks, and La Verdad taquerias are in the works, helped along by the recession’s affordable real estate and diminished competition.

“We’re either going to look like the dumbest guys or the smartest guys on the block,’’ Lyons said. “We’ll see. I’d put my money on smartest.’’

Lyons got into the nightlife game early - making fake IDs for his high school buddies in Buffalo, N.Y. His first club job was at a chain called Uncle Sam’s, where a fondness for foosball led to a job as a barback. He was managing the place by age 18 and soon was sent to shake up other clubs in Detroit, Minneapolis, and Hull. Along the way, he did every job - doorman, coat check, DJ, maintenance man vacuuming vomit out of shag carpets. This time in the trenches helped him learn the business, he said, and learn from his mistakes.

That didn’t stop him from making new ones, though. The first restaurant he and Sparks opened, Fynn’s, a collaboration with Hard Rock Cafe, failed after a few years.

But Lyons and Sparks were determined to do a restaurant right, and in 1993 they paid someone to sit outside a Newbury Street space for two days with a clicker and count traffic. Five thousand-plus clicks later, they signed the lease for Sonsie.

They did not know much about restaurants at the time, but as they settled down and started families, restaurants became more of a focus. “It’s a lot easier,’’ said Lyons, who has two school-age children. Recent additions include Scampo, the chic Liberty Hotel restaurant helmed by chef Lydia Shire, and the Ken Oringer taqueria La Verdad.

Lyons is also the creative force behind the sports-themed Game On! and Bleacher Bar and the rock club Bill’s Bar, all on Lansdowne Street, but dance clubs were his first love. He doesn’t dance. “If I do something, I like to be good at it,’’ said Lyons, who has steely green eyes and rumpled hair streaked with silver.

One thing he’s good at: closing down a club while it’s still hot, something he deems critical to keeping his venues fresh. “Before the club got tired, we would kill it,’’ Lyons said. On the Metro dance club’s last night, Lyons handed out hardhats and had Bobcats drive through the walls at 2 a.m., just as club goers were leaving. When it reopened as Avalon six weeks later, the line stretched into Kenmore Square.

“He just has this innate sense of what people want,’’ said chef Jasper White, who partnered with Lyons on the seafood restaurant chain Summer Shack. “It’s kind of his magic.’’

Part of that magic comes from being involved in every step, from designing a club logo with a tube of lipstick to forming a daily e-mail chain to create a pub’s playlist. But the attention to minutiae can lead to extra work.

After a visit to the new Kings, a 25,000-square-foot bowling alley with a retro ’60s flair at an outdoor mall in Dedham, Lyons had a lunch meeting at the nearby P.F. Chang’s. Admiring the restaurant’s round booths, he asked his architect if he could have similar ones at Hingham Summer Shack instead of the square booths on the blueprint. Then he started grilling the waitress: Are you busy at night? Every night? Have you heard about the King’s opening next door?

Lyons wants to have a hand in absolutely everything, said construction consultant Rich Simmons, all the way down to how the light hits the food: “It drives some people nuts,’’ Simmons said.

He can also be a demanding boss - giving bartenders pop quizzes about beer temperatures - and seems to delight in bending the rules. He obeyed the mall’s size restrictions for the Kings sign, for instance, then hung a massive curtain of shimmering Mylar next to it to catch people’s eyes.

It’s all part of creating an experience. For Lyons, that means not only thinking big, but thinking small - all the way down to the wattage of the light bulbs and the amount of ice in a glass of iced tea. “A successful business,’’ he said, “is an ability to do a thousand little tiny things correctly.’’