GM to phase out Saturn division 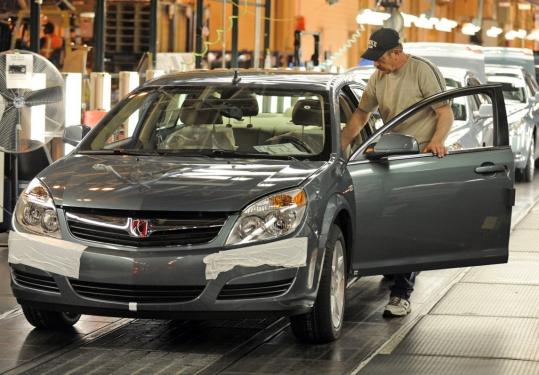 Saturn’s sales jumped in 2006 and 2007, when gas prices rose, but then plunged along with other segments of the market last year. Above, a plant in Kansas City, Kan. (Dave Kaup/ Reuters)
By Kimberly S. Johnson and Tom Krisher Associated Press / October 1, 2009

DETROIT - General Motors Co. will shut down Saturn now that a deal with former race car driver and auto dealer magnate Roger Penske has collapsed, marking the end of a brand that was supposed to revolutionize the way small cars were built and sold in America.

The deal with Penske was supposed to be finalized today. But the unexpected end came when his company, Penske Automotive Group Inc., was unable to find a manufacturer to supply vehicles for the brand’s dealerships. GM had agreed to keep building Saturn models like the Aura, Outlook, and Vue through at least 2011, but after that, Saturn would have to come up with its own products.

“This is very disappointing news and comes after months of hard work by hundreds of dedicated employees and Saturn retailers who tried to make the new Saturn a reality,’’ GM’s chief executive Fritz Henderson said. He said Saturn and its dealership network will be phased out.

Although the sales price was never disclosed, Penske was to get Saturn’s roughly 350 dealerships and promised to retain 13,000 employees.

Penske spokesman Anthony Pordon said the company had reached a tentative deal with another automaker to make cars for Saturn, but that company’s board of directors rejected the agreement. He would not identify the other automaker.

Pordon said there is little if any chance that the talks could be reopened.

Without another supplier in place before the deal was signed, Penske couldn’t run the risk of taking on Saturn, Pordon said. It takes several years to design new vehicles or engineer foreign vehicles to meet US standards. Penske would risk having no products to sell once the GM contract expired.

The Saturn announcement came on the same day GM and Chrysler met on Capitol Hill with dealers and lawmakers as talks began on the companies’ plans to close around 3,000 dealerships. GM is cutting 2,400 dealerships from its 6,000-dealer network by the fall of 2010. Congress is weighing legislation that could force the automakers to reverse their closure decisions.

GM will stop making Saturns as soon as possible, but no layoffs are expected, said spokeswoman Sherrie Childers Arb.

GM had stopped building the Aura midsize sedan in Kansas City, Kan., and will not resume assembling them. Production of the Outlook large crossover near Lansing, Mich., and the Vue small crossover vehicle in Ramos Arizpe, Mexico, will be phased out as soon as possible, she said.

“Those plants produce products for other brands, and we think we can increase volume on those products that will meet market demand,’’ Childers Arb said.

Saturn owners can still go to Saturn dealers for service. They would also be able to go to a certified GM dealer once Saturn dealerships close, GM said.

The news left many of dealers across the country, who had expected the sale to close today, stunned and fearful of being left with nothing to sell.

Carl Galeana, owner of two Saturn dealerships in suburban Detroit, said he’s heard nothing yet from GM or Saturn, but if the plan is to phase out the brand and cut the products, he’ll have to come up with other options.

“We’re going to try to put some plan Bs in place at this point.’’

GM chairman Roger Smith unveiled the Saturn brand in November 1983. But the project was slow to develop and the brand did not officially launch until 1990. It featured the iconic tag-line “a different kind of car company.’’

Despite a cult-like following, the brand never made money for GM, although the company has never disclosed how much it invested or lost.