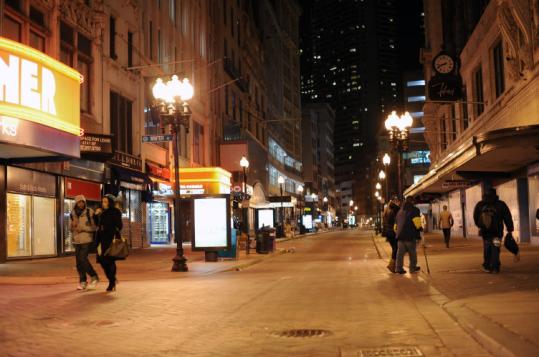 Boston’s mayor and business people have begun another effort to get an improvement district for Downtown Crossing. (John Bohn/Globe Staff)
By Casey Ross Globe Staff / September 25, 2009

Mayor Thomas M. Menino and business executives are stepping up a campaign to encourage commercial property owners to pay a special tax to fund cleaning and streetscape improvements in a 100-acre swath of downtown Boston.

In coming days, organizers will collect signatures for a petition to the City Council, whose approval is needed to levy the tax. At least 50 percent of property owners in the area, which includes Downtown Crossing and portions of the Financial and Theater districts, would have to sign the petition before the council could consider it.

The goal is to create what is known as a business improvement district, a nonprofit association of property owners who agree to pay extra to supplement city services, such as cleaning and security services.

The association would try to raise about $5 million annually for a range of upgrades in the area. Among them would be new landscaping and lighting, seasonal decorations, and uniformed sanitation workers to power-wash streets and remove graffiti daily.

Boston is one of the only major US cities without a business improvement district, which has become a common method of managing commercial districts elsewhere.

Efforts to create an improvement district in Downtown Crossing failed twice in the 1990s because of lack of support. It faced opposition from the Boston Police Patrolmen’s Association, a labor union, because of plans to hire private security guards. That idea has been removed in the latest version.

Still, “By bringing private resources to bear, we can animate the streets and create a sense of place downtown that doesn’t exist today,’’ said John Rattigan, chairman of the Downtown Crossing Partnership, a business association helping to lead the campaign.

The amount of the tax has not been decided. But organizers estimated 210 commercial property owners in the area could be asked to pay between 16 and 22 cents per square foot, based on a review of improvement districts in comparable cities, said Rosemarie Sansone, president of the Downtown Crossing Partnership. The state law governing improvement districts includes a provision allowing property owners within the district to opt out of the tax.

Menino attended a meeting to kick off the effort last week at the Omni Parker House Hotel, where more than 200 business owners and residents gathered to learn more details. Last month, the mayor also wrote to the Downtown Crossing Partnership to express support for the campaign.

“The Downtown Boston BID (business improvement district) will supplement city services in a way that will help transform the area into on the nation’s great mixed-use centers of urban life and commerce,’’ Menino wrote.

Organizers said they are seeking to submit a petition to the City Council to create the district this winter, with the goal of beginning operations next July.