We asked designers to suggest ways to spruce up stalled building projects around the city. Practical and whimsical alike, the results are a far cry from Boston’s buttoned-down norm. 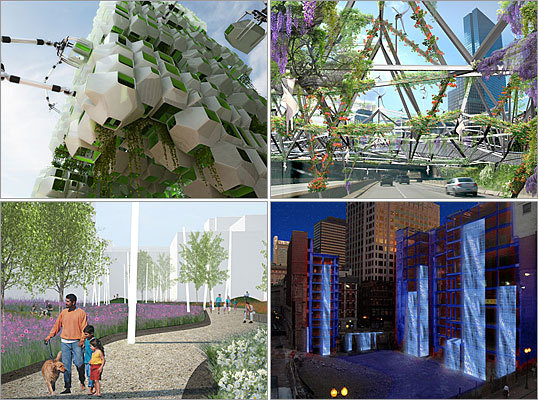 Some of the ideas for sprucing up the eyesores of Boston's stalled construction sites.
Click here to see all the designs, and vote for your favorites.
By Casey Ross Globe Staff / September 20, 2009

There is no telling when a building will rise again at the stalled Filene’s redevelopment, so the city’s architects are filling the void with a few ideas of their own: One is proposing to use the site for a makeshift movie theater, another envisions an exhibit for 1950s neon signs, and still another imagines a towering vertical garden to grow algae for alternative fuels.

The ideas are not restrained by considerations of practicality or cost, and they are not meant to be. They represent an effort to do something creative with a landscape marred by a prolonged slump in commercial building. At stalled work sites, architects and planners are seeking to create forums for artistic expression and experimentation, transforming weed-strewn lots into places where people could pause to enjoy intriguing urban scenery, or at least walk their dogs.

“The idea is to breathe new life into these projects at a time when people would really appreciate it,’’ said Shauna Gillies-Smith, a landscape architect who proposed a medicinal garden for an empty site in the Longwood Med ical Area. “It’s about signaling a present and future commitment to the public realm.’’

At the request of the Globe, Gillies-Smith and nearly 20 other architects and designers submitted proposals for enlivening idled sites across the city. The $700 million Filene’s redevelopment, because of its prominent location downtown, drew the most responses. But proposals were also produced for the $800 million Columbus Center development, Harvard University’s $1 billion science center in Allston, and a $300 million biotechnology laboratory at the corner of Longwood and Brookline avenues.

While some submissions are whimsical, others propose straightforward improvements such as basic lighting improvements or graphics to upgrade dull construction fencing. At Columbus Center, principals of Schweppie Lighting Design Inc. proposed covering a fence with panels that change color as people pass by. At Harvard, John Powell suggested covering the fence in a video screen with images of Allston’s past and renderings of how development could change it in the future.

The fixes range in cost from $300,000 to $1.2 million. Together, they urge developers and city officials to break from Boston’s insistence on the traditional and consider bold displays that are more common in cities such as Tokyo or New York. At the least, said Tim Love, a principal of design firm Utile Inc., developers have an obligation to see that stalled projects don’t become eyesores.

“Any landowner has a civic responsibility to make their property look attractive,’’ Love said. “If a homeowner has a weed-filled front yard or leaves trash out, they would face penalties in most municipalities.’’

Other cities are adopting an array of solutions to the construction slump. In Miami, officials are renting idled sites from developers for $1 a year and making temporary parks of them. In Seattle, one developer of a stalled 15-story office building volunteered to build a fountain, benches, and landscaping, while another allowed local food vendors to set up at the proposed site of a hotel he hasn’t been able to build.

A New York City business association solicited proposals for art installations at four work sites. The installations include a large mural, a series of ink and graphite drawings on a construction barricade, and a covering for 400 feet of Jersey barriers emblazoned with flowers and other colorful images.

Boston officials are now mulling whether to install temporary dressings at several sites. The Boston Redevelopment Authority asked developer John B. Hynes III to cover the two half-demolished buildings on his Filene’s site with large screens. Hynes and city officials are considering whether to print graphics or other designs on the screens.

The BRA is also consulting with the Massachusetts Turnpike Authority about restoring the land at the Columbus Center site. And it is collaborating with the Blackstone Group on a project to install permanent sculptures in and around the lobbies of several buildings the company is renovating downtown.

“There’s not a lack of ideas being batted around,’’ said Kairos Shen, the BRA’s chief planner. “The problem is, how do you implement them? The reason these installations seldom get off the ground is there is no money to pay for them.’’

In most cases, the burden of paying for temporary installations falls on the developer. Builders already don’t have the money restart construction, so they are reluctant to find and spend as much as $1 million for aesthetic improvements.

“I’m not averse to landscaping and creating something unique, but by the time you take down the fencing and mobilize to do the work, we hopefully will be ready to proceed with our development,’’ said Tom Alperin, chief executive of National Development, which stopped construction last fall on the Longwood biotech lab.

The Globe received two proposals from urban designers for the Longwood site, one a landscaped park with a raised plaza and walkways across the property; and the proposal by Gillies-Smith for a medicinal garden with echinacea, begonias, and other plants intended to evoke the healing theme of the neighborhood.

Alperin said it would be too much work to accommodate either proposal in the time frame he’s working with. He said he hopes to resume construction within 18 months.

Some architects and designers urged the city to consider new regulations to help pay for art installations. Josh Barandon, chief executive of Squared Design LLC of Los Angeles, said the city should consider levying a penalty on developers who leave their sites dormant for prolonged periods.

“In our opinion, such a penalty is both logical and feasible, especially in light of the current situation at Downtown Crossing,’’ said Barandon, whose firm collaborated with Howeler + Yoon of Boston to create a vertical garden at Filene’s to grow algae for the production of alternative fuel.

Love, the principal of Utile, said the city could require developers to buy insurance that would pay for aesthetic improvements in case financial problems forced them to stop construction.

“If developers want to play in this city and take risks, one of the risks they have to mitigate is the chance that the economy might collapse between permitting and construction,’’ he said.

But advocates for the commercial building industry said putting more demands on developers will only stifle building that the city should be trying to stimulate. “To financially penalize developers trying to hold onto their projects is ludicrous at a time like this,’’ said David Begelfer, chief executive of NAIOP Massachusetts, a commercial real estate trade group. “We have a unique circumstance in the financial markets. If you try to put in place regulations because of that, it could have unintended consequences for future growth.’’

Hynes, the Filene’s developer, doesn’t know when he’ll be able to resume construction. In the meantime, as he prepares screens to protect the two buildings on the site this winter, Hynes said he is willing to consider incorporating art but is more focused on the functional than the fanciful.

“Priority one is to protect the structure of the buildings, and priority two is the aesthetics,’’ he said. “We’re not predisposed to anything, but the hope for us is that whatever we end up doing, the emphasis is on temporary.’’

Check out architectural renderings for Boston's stalled projects.
Your comment is subject to the rules of our Posting Policy
This comment may appear on your public profile. Public Profile FAQ