A sour ending for sweets shop 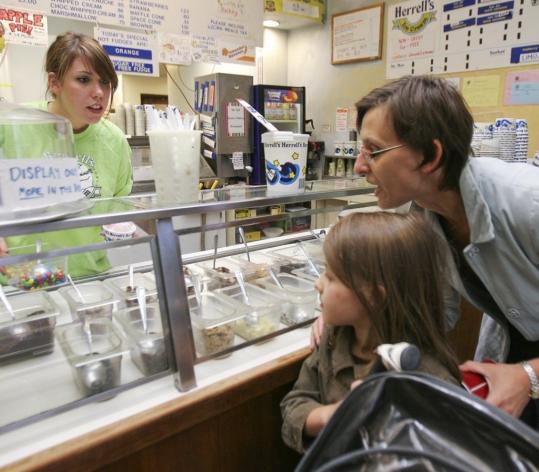 After more than 27 years, Herrell’s Ice Cream shop in Harvard Square is shutting its doors, just months after another location closed in Allston.

Jeffrey Stanett, owner of the Dunster Street spot known for premium sweet treats, said the business had been losing money for years and he could no longer afford to subsidize the store in the face of higher rents, increased franchise fees, and growing competition from rivals like J.P. Licks.

“I feel horrified that I cannot keep the Herrell’s flag flying. I’m devastated,’’ Stanett, 67, said yesterday, leaning back in the corner bench of his Cambridge shop. “It just wasn’t possible anymore.’’

Stanett plans to close the shop in the coming weeks and turn the space into a moderately priced restaurant and name it First Printer Restaurant Bar & Grill because of a plaque that he discovered in the building that said it was the site where the first printer was built. The company that owns the Herrell’s brand has three remaining stores, its Northampton flagship, one in North Adams, and one in New York.

Over the years, Herrell’s, with its old-school tropical murals and old bank vault, had managed to hold its own against other ice cream shops around Harvard Square by offering distinct, rich flavors like chocolate pudding and sweet cream. According to the company’s website, Herrell’s founder Steve Herrell was the first person to grind up name-brand candies and mix them into ice cream.

But last year’s debut of J.P. Licks, a local chain offering high-end frozen concoctions, took a serious toll on Herrell’s business. Stanett said he had previously tried to expand Herrell’s with a more extensive menu into the J.P. Licks location but was rebuffed by the developers.

Vince Petryk, owner and founder of J.P. Licks, said his business is a stronger competitor than previous ice cream rivals, including Toscanini’s and Emack & Bolio’s, that once occupied the same location J.P. Licks moved into on Massachusetts Avenue.

“It’s sad because Herrell’s tenure in Harvard Square was almost as long as mine in Jamaica Plain,’’ Petryk said.

Toscanini’s moved out of Harvard Square several years ago and, in January 2008, its Central Square location was seized by the Massachusetts Department of Revenue for two weeks because the owner owed more than $167,000 in taxes.

Judy Herrell, of Herrell’s Development Corp., said the Harvard Square shop was a great franchise for so long and she is sad the location is closing. But she did not believe the new franchise agreement was too costly and led to the closing, which was first reported in the Harvard Crimson. Sales would have been higher, according to Herrell, if the store had improved its rundown look.

“We suggested multiple times that they might want to repaint and redecorate, that things needed to be spruced up,’’ Herrell said.

Stanett agreed that his shop, with its scuffed walls, handwritten signs, and hard wood benches, could benefit from a makeover. But as a tenant-at-will with a month-to-month lease for many years, Stanett said it didn’t make sense to invest in a place in which he did not have long-term security.

The ambience didn’t seem to bother loyal customers like Ben Newcomber, 28, who visits Herrell’s several times a week for sweet scoops like buttercream and sweet cream.

“I really like the texture,’’ Newcomber said as he took a break from his treat. “It’s going to be a disappointment to find a replacement.’’

When his new First Printer restaurant opens next spring in an expanded space, Stanett said he hopes to serve up premium hot dogs, cheap burgers that rival nearby Bartley’s, and fancy frozen desserts that could compete with Finale.

“It won’t be Herrell’s, but it will be something special,’’ Stanett said.

And, no worries, he’ll keep the vault.