The wonder, and the fall

A source of pride, plenty for Pequots in boom times, struggling Foxwoods now a looming threat to tribe 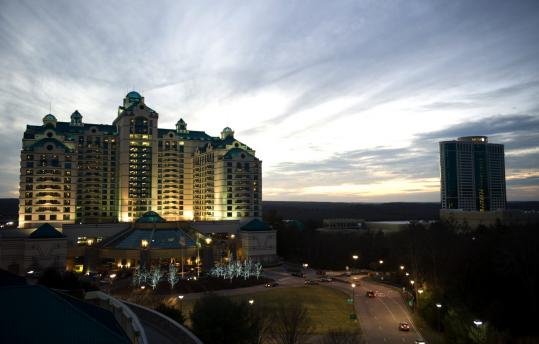 LEDYARD, Conn. - When the doors at Foxwoods first swung open in 1992, more than poker fanatics and bingo mavens began trekking to the sparkling new casino nestled in the thick forests of the Mashantucket Pequot reservation.

Dozens of Pequots traveled from as far away as California and Hawaii to their native lands in southeastern Connecticut. Many came for the promise of a steady job, and to reconnect with a tribe that had come close to extinction. But Foxwoods did not just help revive the Pequot nation; it made it fabulously wealthy. Within a few years, Foxwoods was the world’s largest and most successful casino resort, an entertainment mecca that racked up more than $1 billion annually.

The fortune yielded nice homes, fancy cars, college degrees, community centers for tribal members, and a massive museum of native history. With the money came fame, as Foxwoods’ significance stretched beyond the tribe’s well-being. The Pequots had paved the way for more than 230 tribes across the country to launch their own gaming enterprises and finally become self-sufficient communities - and thus preserve their native unity.

But now Foxwoods faces financial problems that threaten to tear the tribe apart. Crushed by more than $2 billion in debt from exorbitant expansion, the resort is fighting an uphill battle against sliding revenues because of the economy and increased competition from newer venues. More than 700 layoffs in the last year, or about 6 percent of the workforce, failed to stem the bleeding as slot revenues at the casino continued to drop, plunging 13 percent in July to $63.2 million compared with a year ago.

Foxwoods - once the symbol of the Pequots’ greatest achievement - has become the subject of nationwide speculation that the largest Native American casino could fail.

“The casino helped bring this tribe together. People were so proud,’’ said Debbie Frankovitch, 55, a Pequot who has lived on the reservation her entire life and used to work as a tribal clerk. “Now, the casino is a big embarrassment. It’s just a lot of greed. People wanted more and more. It’s like a nightmare. It’s a shame it’s come to this.’’

The Pequots council chairman, an elected leader who serves at the head of tribal government and the casino, was placed on leave on Aug. 31 after he warned of Foxwoods’ “dire financial straits’’ and reportedly promised to preserve payouts for tribal members before paying off lenders. That set off jitters among creditors, and the fallout has already spread to other tribes. Their bonds are trading at lower prices following the Foxwoods debacle, sparking worries that native casinos such as Mohegan Sun will find it more expensive to borrow money. The tumult threatens to unravel years of unfettered success and tribal security, and dampen efforts to expand native gaming to other states, including Massachusetts.

Pequot leaders declined interviews about the crisis they face. In a statement, the council said: “We remain in compliance with our covenants and are current with regard to our debt obligations. As we continue through this process, the Tribe will be pursuing a mutually beneficial resolution with its banks and bondholders.’’

Like so many other industries, casinos rode the wave of easy credit to success in the years leading up to the recession, and Foxwoods was no exception. The Pequots, who had to go to Malaysia to fund the initial $60 million casino because no one else would lend to them, soon had banks lining up with loan offers as Foxwoods raked in customers - and their cash. The tribe quickly expanded the resort, adding hotels, restaurants, and shops to the complex, which now stands at 4.7 million square feet, nearly 20 times its original size. The Pequots also spent big to acquire nearby businesses and invest in other industries, such as shipbuilding -an expensive effort that later flopped. The casino operation was also a major boon to Connecticut under an arrangement that provides 25 percent of gross slot revenues to the state or a minimum of $100 million annually.

“My job was to build as much as we could as quickly as we could, and make as much money for the tribe as we could,’’ said Mickey Brown, president of Foxwoods from 1993 to 1997.

Brown, a veteran gaming executive, said the debt the resort took on in the early years was sustainable given the huge revenues coming in from the casino. But many Pequots wanted an increasing share of the profits, and individual payments to tribal members, known as incentives or distributions, became part of the operation. At one time, the payments exceeded $120,000 annually for members. Brown said these kinds of distributions didn’t begin until near the end of his employment, but he declined to comment further.

“Over time, the tribe developed some different thoughts and philosophies on how to do things, and it was not a facility I could continue to work for, and they didn’t want me to continue to work,’’ Brown said.

As competition intensified from nearby casinos, such as Mohegan Sun in Uncasville and Twin River in Rhode Island, Foxwoods embarked on a $700 million project to create MGM Grand at Foxwoods, a partnership with one of the premier Las Vegas operators that was intended to redefine Foxwoods’ reputation as a destination for high-end rollers and star talent. As part of a deal announced in 2006, MGM Mirage promised to provide up to $200 million in loans to fund joint casino expansions in new cities, and had scoured for locations in Kansas and Massachusetts.

But by the time the MGM Grand at Foxwoods debuted in May 2008, the recession was well underway, and gambling receipts were dipping sharply nationwide. Plans to export the Pequots’ success to other states were scrapped, and the millions of dollars that Foxwoods expected from new ventures with MGM never materialized as the Las Vegas giant also began to teeter under the recession. Now, the shimmering tower stands as a symbol of excess, with unbooked rooms, empty stores, and a sparsely populated gaming floor. One measure of the slide: Even with the new slot machines at MGM Grand, Foxwoods’ annual contributions to the state have dropped 14 percent since the high of $205 million in 2005.

“Yes, we spent too much money. Of course we made mistakes. We made the same mistakes that everyone else has made across the country,’’ said Roland Fahnbulleh Jr., 33, a tribal member who moved from Boston to the Pequot reservation more than a decade ago. “Why would people expect to hold us to a higher standard? We know we have to buckle down. More than anything, we have to come back together as a tribe.’’

The future of Foxwoods and the Pequots, which have swelled to 832 tribal members from 250 in 1992, has Fahnbulleh worried. The casino employs his wife as a special events coordinator and has helped him start his own multimedia business. Foxwoods is where they held a baby shower, meet up for family dinners, and watch shows. But it’s not just personal income and amusement. Revenues from Foxwoods support the entire community, funding a child-development center Fahnbulleh’s 7-month-old attends, a police force, a post office, and other services for tribal members. Already, the Pequots have seen their distributions slashed by about 30 percent, and many have lost jobs at the casino and are in danger of losing homes.

“The casino is not just equity. They don’t just own it,’’ said an adviser to the tribal council who is not authorized to speak publicly. “They are it.’’

So, dealing with the financial troubles at Foxwoods isn’t just about solving a business problem at a casino. It’s about finding a way to salvage the economic engine that sustains the Pequot nation. And if the Pequots - as one tribal leader suggested - decide to pay members before paying their bills, it could create serious problems for lenders. Because the casino is on reservation land that is considered, under federal law, part of a sovereign nation, lenders cannot turn to the typical remedies in the event of a default, such as foreclosing on Foxwoods and taking ownership. The Pequots have hired a financial firm to try to restructure their debt by cutting interest rates, extending due dates, and exploring whether a bankruptcy is even possible, according to the adviser.

Clyde Barrow, director of the Center for Policy Analysis at the University of Massachusetts at Dartmouth, said Foxwoods has been beset by various problems, and said he believes the casino’s lenders were not fully aware of the magnitude of debt that Foxwoods was accumulating. Other casinos, such as Mohegan Sun, have fared better because they suspended expansion plans when the economy crumbled.

Gaming analysts and casino operators say the ongoing struggles at Foxwoods and the threat of default could have a chilling effect on the entire industry.

“Everyone is reeling a bit from the Foxwoods issues. It has not made things easy,’’ said Leo Chupaska, chief financial officer for the Mohegan Tribal Gaming Authority. “What occurred at Foxwoods is a negative for the entire Native American gaming sector.’’

Across Foxwoods and the surrounding reservation, the anxiety and frustration are palpable. Nervous employees try to untangle rumors and express worries about job security. And some tribal members have talked of clashes within their own families over the right course of action. On almost every street corner, Tony Beltrane, who is running for tribal council in November, has stuck white signs emblazoned with the question: “Haven’t we had enough yet?’’

Charles Rogers, a Pequot who now lives in Groton, said the tribe looked at Foxwoods as a bottomless pit of money and it poisoned a community of people who suddenly achieved a lifestyle they had never imagined.

“The casino allowed people to come forward and admit who they are, and it offered a sense of pride and stability. But then it evolved into a sense of entitlement,’’ Rogers said. “This entitlement and one-upmanship and ego is really what’s ruining this tribe and ruining the casino. How much money is enough? At what point do you ask yourself that question? For some people, there’s never enough.’’