1950s-style drive-in food chain, long awaited by its fans, arrives in Mass. with a boom, and traffic jams follow 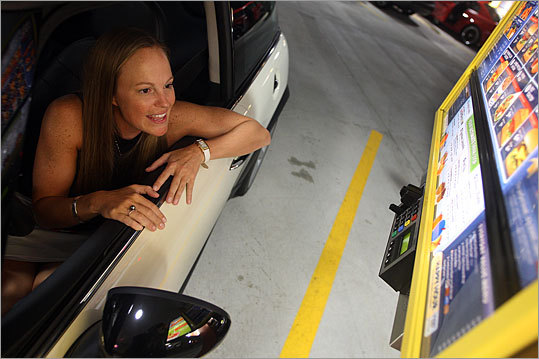 (Jim Wilson / Globe Staff Photo) Heidi Brockman, a graduate student at Harvard University, celebrated her 30th birthday at Sonic last week with a friend. She reported waiting more than an hour to get a parking spot at the 1950s-themed drive-in restaurant.
By Jonathan Phelps Globe Correspondent / September 9, 2009

PEABODY - It was reminiscent of the 1950s, the glory days of drive-ins: carhops on roller skates carrying burgers and shakes, lots of tailgating, and the aroma of fries wafting through the air.

This was the scene at about 10 on a recent evening at New England’s first Sonic. Since the restaurant opened on Route 1 in late August, thousands of patrons have arrived to try Sonic’s burgers, hot dogs, and milk shakes, jamming traffic late into the night with waits of up to four hours at times.

Of course, the inaugural success doesn’t guarantee longevity in Massachusetts.

Krispy Kreme drew hordes of doughnut devotees when it opened in Medford in 2003, but today it has no stores in the state.

On this stretch of Route 1, though, already saturated with fast-food joints, few restaurants - not even Hooters - have been welcomed with this kind of attention.

About 54,000 customers showed up in the first 10 days, Sonic estimated.

Captain Joe Berardino of the Peabody Police Department said that although Route 1 is usually busy, there has been markedly more traffic since Sonic opened, both customers and gawkers.

“People are slowing down to look at the restaurant,’’ he said.

It features 21 drive-in stalls, patio ordering stations, and a drive-through and is open every day from 6 a.m. to 2 a.m.

“It is something out of the past,’’ said Peter Christie, president of the Massachusetts Restaurant Association. Yet “it is new and exciting.’’

Sonic, where the offerings include $3.59 extra-long chili cheese coney hot dogs, $4.49 chicken club toasters, and three kinds of tater tots, has been so popular in Peabody that the owners have hired a valet company to direct cars into the drive-in and a police detail to manage the traffic flow.

“It is a different concept, and the brand is growing,’’ said Gina Monastiero of Lynnfield, who opened the franchise with her husband, Gregg Monastiero.

The chain, based in Oklahoma City, operates 3,500 drive-ins in 41 states. It says it’s the nation’s largest chain of drive-in restaurants.

The turnout in Massachusetts is not surprising, company officials said. Sonic, which opened its first store in 1953, said it has the highest customer-frequency rate in the industry, and its stores’ sales average more than $1.1 million annually.

But this is the first time New Englanders have been able to test the brand in their own backyard. Previously, the Sonic closest to Boston was in Kingston, N.Y., about 150 miles away, said Dave Vernon, vice president of franchise sales at Sonic Corp. “We are making a push to become a more nationally known brand,’’ he said.

Johnny Lundstrom, 32, recently traveled about 40 miles from Epping, N.H., and waited nearly two hours to eat an extra-long chili cheese coney at Sonic - two nights in a row. He didn’t get to eat the first time, because the restaurant could not accommodate all customers before the 2 a.m. closing.

“I am originally from Texas and Sonics were all over the place, so when I found out they were building one in Mass., I was wicked excited,’’ said Lundstrom, who showed up at 1 a.m. on the night he got turned away.

Heidi Brockman, a graduate student at Harvard University who is studying political science, was so thrilled that Sonic had opened in Peabody that she decided to celebrate her 30th birthday at Sonic with a friend.

Her birthday meal: a chicken club toaster and a cranberry limeade.

“Oh my God, Sonic is so much better than going to a bar,’’ Brockman said. “All my friends know I am here because I told them we couldn’t hang out tonight. They understand, especially the ones who have been to Sonic before.’’

“It was like a tease, two-and-a-half years of Sonic commercials and not having any around,’’ said John Towle, 26, of Tewksbury. He waited two hours with four friends to get a meal. “I honestly never thought there would be a Sonic in Massachusetts,’’ he said.

And the first Massachusetts Sonic probably won’t be the last:

The Monastieros, the Peabody franchise owners, said they hope to open 20 more restaurants in the state within five years. They expect to open one in Wilmington by year’s end. They also plan to add classic car nights.

And how will drive-ins fare during Massachusetts’ cold winters?

“They have had Sonics in cold-weather states for decades,’’ said Gina Monastiero. “People just pull up to the stalls or go through the drive-through; they just won’t be using the patio.’’