Despite N.Y. firm’s bid, 2 say they already have deals for stores 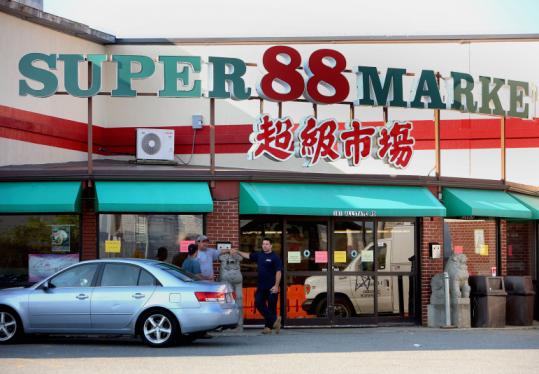 A New York company said last week that the owners of Super 88 grocery stores agreed to sell the chain, but two others say they have already made deposits on individual stores. (Wendy Maeda/Globe Staff)
By Erin Ailworth Globe Staff / September 3, 2009

Two potential buyers have asked a Suffolk Superior Court judge to halt the sale of the Super 88 Asian grocery chain, saying they have already struck separate deals to buy two of the stores.

The challenge could undo an agreement with Hong Kong Supermarkets Inc., the New York company that last week said it is purchasing the chain.

According to filings made last month, George V.H. Luu, son of Super 88 founder Peter Luu, agreed to sell the company’s Dorchester store at South Bay Center for $2 million to Wincent International Inc., a New Jersey company that runs an Asian market in Quincy called Kam Man. A similar deal had been struck with local businessman Gary Wong, a wholesale food distributor, who says he agreed to purchase the Super 88 store in Allston for $3.2 million.

But last week, Hong Kong Supermarkets’ comptroller, Richard Tang, said his company would acquire all the stores in the chain - a claim he reiterated in an interview this week. Hong Kong Supermarkets has posted “coming soon’’ signs in Super 88 stores promoting the new ownership, and, Tang said, its chief executive was in Massachusetts last week visiting stores.

“We’re buying [the stores in] Dorchester, Allston and Malden,’’ Tang said. “It’s coming. It’s not final. But we are under the impression that after the professional due diligence all things will clear up.’’

Tang said he was unaware of the court disputes involving two of the three stores his company had agreed to purchase. Suffolk Superior Court filings show a judge had granted restraining orders temporarily preventing the Luu family from selling the Super 88 assets already promised to other buyers.

The popular Asian grocery chain has struggled, and about a year ago downsized by closing three stores - one in Quincy and two in Boston, in the South End and Chinatown. The chain owes close to $700,000 to several vendors for fruits, vegetables, seafood, and other items, according to separate court case filed by those vendors seeking money. At least one vendor asked a judge to seize property believed to be owned by the Luus to force the family to pay its debts.

Lawyers representing Wincent International and Wong, meanwhile, say they are confounded by the Luus’ handling of the sales of the stores. Both say their clients had signed agreements to purchase individual stores in Allston and Dorchester and had paid deposits when rumors started circulating in mid-August that the Luus had made a deal for the entire chain with a third buyer. That was when Wincent International and Wong went to court.

“I’m guessing what happened is they made these deals to sell two of the remaining three stores,’’ said Howard P. Speicher, who is handling Wincent International’s case. “And then they came up with another buyer - Hong Kong Supermarkets - that was willing to take all three stores, so they tried to walk away from these other deals.’’

Added Vincent J. Pisegna, Wong’s lawyer: “We don’t know all the whys and wherefores of what Mr. Luu is doing. All we know is that we have a signed agreement and we put down a $50,000 deposit.’’

Attempts to reach the Luus have been unsuccessful. The family has been spending time in Vietnam working on a casino and 1,200-room luxury hotel. Peter Luu reportedly was planning to invest up to $4.1 billion in the project through his company, Winvest.

The hotel and casino, which will be located on the southeastern coast of Vietnam, might have contributed to the financial problems Super 88 and the Luus are facing, said attorney Vy H. Truong, whose client Tin World Inc. in New York is suing Super 88 for failing to pay for about $440,000 worth of vegetables.

Truong said Tin World had been supplying Super 88 with produce for two decades.

“They’ve been doing business with each other for a long time and, don’t get me wrong, Peter [Luu] was doing good business with Super 88 until he decided to make investments in Vietnam,’’ Truong said. “It has not been working out for him.’’

Meanwhile, Tang, of Hong Kong Supermarkets, said he is confident his company’s lawyers will untangle the matter of who will buy Super 88.

He said he still thinks the chain is a good business opportunity.

“We’re a buyer willing to buy. We need a seller willing to sell,’’ Tang said, “then the deal will be final.’’

Take a trip down memory lane with these stores from the past.