Followers of a mystical religion were taken in by Madoff scheme 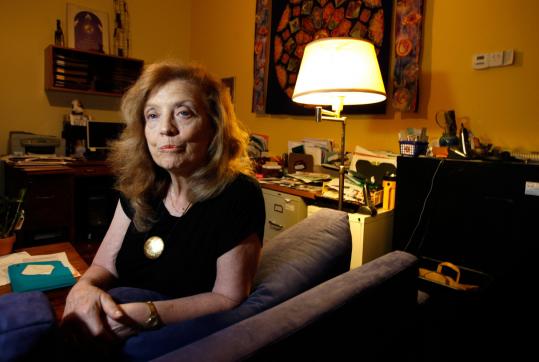 There’s another religious group that was taken in by Bernard Madoff, one that’s less well known than the Jewish community he so widely infiltrated: the Sufis.

A number of Sufis, who practice a mystical form of Islam, and Sufi groups on both US coasts entrusted millions of dollars to a California lawyer, Richard M. Glantz, who is a member of the Sufi community. He in turn placed their money with Madoff. The connection: Glantz, raised in a Jewish family, is the son of a New York accountant who had placed $88 million in client funds with Madoff.

“We’re devastated,’’ said Saphira Linden, a Jamaica Plain Sufi teacher and drama therapist who recalls learning of her Madoff losses when her son called her while she was driving home from the hairdresser on Dec. 11. Linden, 66, runs a drama program out of her home, in cooperation with Lesley University. She lost her Omega Theater program’s $76,000 endowment to Madoff, as well as her personal savings.

“We cannot continue the school unless we raise money,’’ Linden said.

She and nine others first invested with Madoff 20 years ago, through a connection of a Sufi friend, coming up with $10,000 each. Then, after another Sufi friend introduced her to Glantz, she had him manage her money. She invested not only the theater’s funds but her nest egg - several hundred thousand dollars from the sale of a Jamaica Plain property. The money was meant to support her theater program and her retirement.

Glantz, a lawyer in San Raphael, Calif., is also chairman and treasurer of the Hope Project, an India-based nonprofit founded by a Sufi teacher. According to people who do business with him, Glantz ran at least two large funds for friends and family - the Fern Creek Limited Partnership and the Ostrin Family Partnership - portions of which were invested with Madoff. He earned commissions on clients’ investments.

Glantz got in trouble for his business relations with Madoff nearly two decades ago. He and his late father, Edward Glantz, were disciplined by the SEC in 1993 for raising money for Madoff in the form of unregistered securities. Edward Glantz and a partner raised $88 million, according to SEC documents, which they sent to Madoff via an accounting firm started by Ruth Madoff’s father, Saul Alpern. Richard Glantz, meanwhile, raised $30 million for Madoff from 350 investors from 1985 through 1992, the SEC said.

Richard Glantz was fined $300,000 and, according to a June report by PacificSun, an online paper in Marin County, Madoff had to return the $30 million to Glantz’s clients. Glantz said he continued to make referrals to Madoff, but did not take fees again until 2007, when he said he registered with the SEC.

Glantz did not return calls requesting an interview. In the PacificSun report, he said he had lost millions of his own money to Madoff, and had to sell two homes.

For members of the Sufi community, the Madoff news came as a particular blow. A group whose traditions include embracing all religions, woodsy retreats, and meditative dancing, Sufis may have been overly trusting of Madoff, they now say, and unsophisticated about investing.

Alima Lucinski, executive director of the Sufi Order International, North America, said Glantz assured the organization as recently as last September - when the stock market was in a deep dive - that it was on track to make money because Madoff had its investments in US Treasuries. The New Lebanon, N.Y., group was invested in the Fern Creek fund, which had a large slice of its estimated $17 million with Madoff. The Sufi Order declined to say how much of its endowment was lost to Madoff.

Lucinski said she believes a greater number of religious groups and nonprofits were affected by Madoff than is known, because some are not required to reveal their finances and are also reluctant to do so voluntarily. “It’s not something people want to come out and say,’’ she said.

Linden has been public about her losses because her Omega Theater is now broke. In its early days in the 1960s, the group performed Bertolt Brecht works on Lewis Wharf and later did puppet theater for children and large sociopolitical pieces. One play about the turbulence of the 1960s, “Riot,’’ went to New York and in 1968 won an off-Broadway Obie Award. In October, Linden is scheduled to perform in a two-woman show called “Motherblood’’ at Passim in Cambridge.

Linden now devotes most of her time to teaching and is writing two books. She has melded her spiritual side with theater to teach actors, poets, social workers, and business people theatrical and spiritual skills they can apply to their own work. She is making ends meet in her modest apartment attached to the theater, but can’t take on new students. “I had to stop everything,’’ she said.

Linden said she trusted Glantz with her money because “he had found this way to help people.’’ He sometimes would warn investors that the returns of 15 to 18 percent a year they were allegedly getting from Madoff could one day vanish. “It could change in a minute, so you’re taking a risk,’’ Linden recalled Glantz saying.

All Linden has to show for her investments now is a neatly filed stack of old statements. One, dated Feb. 15, 2002, says Madoff bought 62 shares of American International Group for her account. As it turned out, Madoff never made any of the trades he detailed so carefully for clients.

Linden also has a copy of a letter she sent in 2001 to Madoff’s top lieutenant, Frank DiPascali. In it, she inquired about her account, noted that she was adding $20,000 to it, and praised him for his work. “Let me take this opportunity to thank you for the work you do for me and for other friends who invest with you. It has made such a difference in my life,’’ she wrote.

DiPascali is now awaiting trial and faces 125 years in prison for his role in the Ponzi scheme, the first executive other than Madoff himself to face indictment so far.