US indicts 2 as UBS inquiry expands 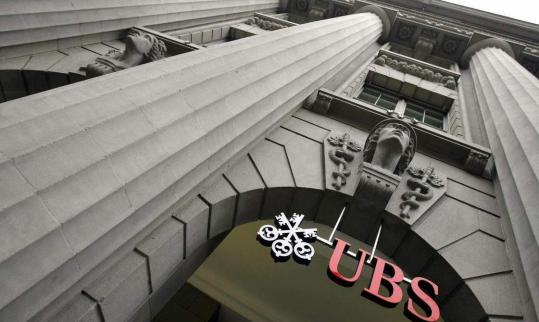 With the indictment of a Swiss lawyer and a former UBS executive yesterday, the IRS widened its investigation into hidden offshore assets beyond the Swiss banking giant. (Walter Bier/Associated Press/File 2008)
By David Voreacos Bloomberg News / August 21, 2009

NEWARK - A former UBS AG manager and a Swiss lawyer were indicted yesterday in a widening US crackdown on bankers and lawyers who allegedly helped wealthy Americans hide assets from the Internal Revenue Service.

Hansruedi Schumacher, a Neue Zurcher Bank manager who once ran the cross-border business for UBS, and Matthias Rickenbach, a Zurich lawyer, were charged with helping Americans evade taxes on UBS and NZB accounts.

Two UBS bankers and five of the bank’s clients were previously charged.

The indictment came one day after UBS, the largest Swiss bank, agreed to reveal data on 4,450 accounts to settle a US lawsuit seeking names of Americans suspected of evading taxes. The IRS is pursuing bankers and lawyers beyond UBS, said Commissioner Douglas Shulman.

Prosecutors said this week that 150 Americans are under criminal investigation. The UBS settlement yesterday came in a US lawsuit filed Feb. 19, a day after the bank agreed to divulge names of 250 accountholders and pay $780 million to avoid prosecution for helping Americans evade taxes.

UBS clients can report their accounts to the IRS until Sept. 23. Those voluntary disclosures helped widen the IRS net.

“As more Americans voluntarily come into compliance and face their financial obligations, more leads are being developed and new investigations are initiated,’’ acting US Attorney Jeffrey Sloman said.

US authorities have issued arrest warrants for Rickenbach, 42, and Schumacher, 51, who are Swiss citizens and can’t be extradited, according to a person familiar with the matter.

The one-count conspiracy indictment alleges Rickenbach and Schumacher worked together to help conceal the assets of two UBS clients in the United States who were criminally charged in the past month, John McCarthy and Jeffrey Chernick.

Rickenbach and Schumacher took part in a $45,000 bribe paid on Chernick’s behalf to a Swiss official for information about which UBS accounts would be given to US authorities, the indictment said. In pleading guilty on July 29, Chernick said a Swiss attorney told him a bank executive paid the bribe, without naming Rickenbach and Schumacher.

Both Rickenbach and Schumacher persuaded clients not to voluntarily disclose their accounts to the IRS, according to the indictment. They set up sham entities to hide assets from the IRS, helped clients move offshore assets to the United States, and hand-delivered cash here, prosecutors allege.

The men created phony documents to disguise the transfer of money into the United States, including fake loan papers and documents showing that repatriated offshore money was an inheritance from foreign residents, prosecutors allege.

Neither Rickenbach nor Schumacher could be reached for comment.