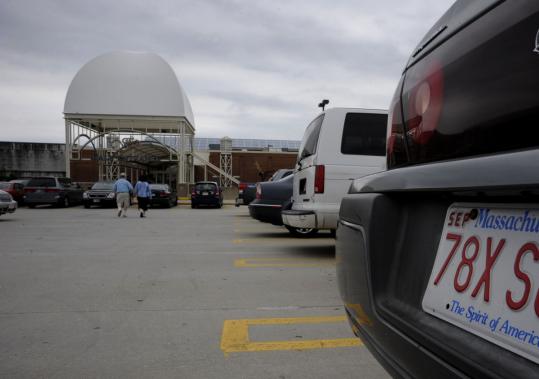 SALEM, N.H. - Some Massachusetts consumers, frustrated by the recent sales tax hike, say they are driving miles out of their way to shopping centers in tax-free New Hampshire for their back-to-school needs.

And it’s not just the usual border crossers. Nancy Hemme, annoyed by the 62-cent tax she recently paid on $10 worth of school supplies at the Staples store in North Reading, decided to do the rest of her school shopping 20 miles away in New Hampshire, where she loaded up on folders, notebooks, and other supplies for her three children at Wal-Mart. She plans to make another trip this month for a television and other items before her son goes off to college and estimates she will spend close to $1,000 in New Hampshire, money she usually would have spent at the local stores in North Reading.

“I just don’t understand in this economy why you’re hurting the retailers and customers even more. It’s worth it to me to drive the extra miles and save money,’’ Hemme said. “I’ve got a big tuition bill coming.’’

Some border merchants in New Hampshire say they are seeing a spike in sales since Massachusetts raised its sales tax from 5 percent to 6.25 percent on Aug. 1, while other retailers in the Commonwealth are reporting double-digit drops in business compared with the same period last year. Massachusetts officials have estimated the tax increase would generate about $759 million this year to help fill holes in the state budget.

Already, the tax hike has become a hot political issue in next year’s gubernatorial race, with several candidates promising to roll back the increase.

August sales tax payments are not due to the Massachusetts Department of Revenue until Sept. 20, so it is too early to determine the effect of the sales tax increase. But the elimination of the annual sales-tax holiday - typically scheduled for this upcoming weekend - and the recent rate increase have Massachusetts merchants worried about a significant drop in sales at a time when they can least afford to lose business.

Dick Dube, owner of Dick’s TV & Appliance in Methuen, is projecting sales to plunge 50 percent compared with last August, about $100,000 worth.

“Merchants are saying business is already way off,’’ said Jon Hurst, president of the Retailers Association of Massachusetts. “We’re afraid that a combination of consumers being frugal in tough economic times and consumers being angry over the tax increases is going to push a lot of consumers to New Hampshire.’’

The timing couldn’t be worse for retailers who are already bracing for a tough back-to-school season, which is typically the second-largest shopping period behind the holiday season. The National Retail Federation is expecting an 8 percent decline in sales from last year for back-to-school spending.

“Sears still wants to make sure shoppers get their discounts in time for back-to-school shopping,’’ said Dara Cothran, a Sears spokeswoman.

At the Mall at Rockingham Park’s packed parking lot in Salem, N.H., Massachusetts license plates recently outnumbered those from New Hampshire. Simon Malls, which operates the Mall at Rockingham Park, would not provide details on any traffic increase from Massachusetts business. But Emily Hoang, Rockingham’s director of marketing, said, “In today’s economic climate, the Mass. sales tax increase is a potential incentive for more shoppers to cross the border into New Hampshire, largely for bigger ticket items such as electronics.’’

Indeed, Nancy C. Kyle, president of the Retail Merchants Association of New Hampshire, said merchants in the Granite State already have seen a boost in sales, particularly with electronics for back to school season, from Massachusetts shoppers. But she said most retailers are reticent to talk about how much sales have increased among out-of-state residents because they do not want to alert the Massachusetts revenue authorities.

The Massachusetts Department of Revenue is embroiled in a lawsuit with a New Hampshire tire store after the Commonwealth attempted to collect sales tax from the store for serving customers from the Bay State. New Hampshire Governor John Lynch recently signed a bill to prevent Massachusetts from collecting sales tax from merchants over the border, but retailers are still on edge.

Bob Bliss, a spokesman for the Massachusetts Department of Revenue, said the net revenue gains from the sales tax hike outweigh the $48 million in expected losses from sales diverted to New Hampshire, the Internet, or reduced demand.

He said the department is encouraging Massachusetts shoppers to fill out use tax forms but did not plan increased patrolling of border shopping.

Jillian Carver of Haverhill headed up to the Best Buy in Salem, N.H., to purchase a $300 laptop for college on Aug. 1, the first day of the sales tax increase, and saved nearly $20.

The crush of traffic from other Massachusetts shoppers crossing the border turned the 15-mile trip into an hour-long drive. Nonetheless, Carver, 20, plans to do all of her back-to-school shopping in New Hampshire this year, even the pens, notebooks, and pencils she typically purchases at stores in Massachusetts.

“My mom told me to avoid the sales tax by going to New Hampshire and it just makes sense,’’ Carver said.