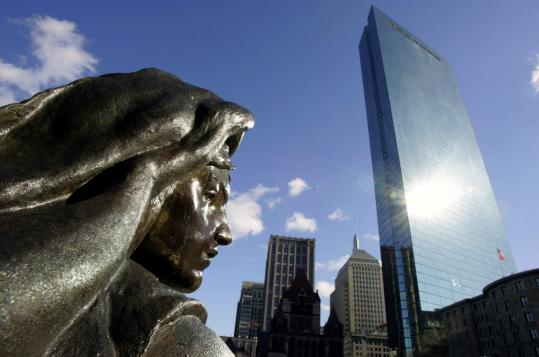 The John Hancock Tower in Boston was auctioned in March when its owners were unable to make debt payments on the property. (Michael Dwyer/ Associated Press/ File 2005)
By Scott Lanman Bloomberg News / August 11, 2009

Property values have fallen 35 percent since October 2007, according to Moody’s Investors Service.

That’s making it tough for owners to refinance almost $165 billion of mortgages for skyscrapers, shopping malls, and hotels this year, pressuring companies such as Maguire Properties Inc., the largest office landlord in downtown Los Angeles, to put buildings up for sale.

The industry is likely to be high on the agenda when Bernanke and his colleagues sit down in Washington today at the Federal Open Market Committee meeting on monetary policy. Lawmakers including Barney Frank and Carolyn Maloney are pushing the central bank to extend an aid program designed to restore the flow of credit.

If nonresidential real estate remains in the doldrums, the Fed may be forced to leave emergency-lending programs in place and keep its benchmark interest rate close to zero for longer than some investors expect, given positive signs elsewhere in the economy.

Commercial property is “certainly going to be a significant drag’’ on growth, said Dean Maki, a former Fed researcher who is now chief US economist in New York at Barclays Capital Inc., the investment banking division of London-based Barclays PLC. “The bigger risk from it would be if it causes unexpected losses to financial firms that lead to another financial crisis.’’

The Fed is “paying very close attention,’’ Bernanke, 55, told the Senate Banking Committee on July 22, the second of two days of semiannual monetary-policy testimony before the House and Senate. “As the recession’s gotten worse in the last six months or so, we’re seeing increased vacancy, declining rents, falling prices, and so, more pressure on commercial real estate.’’

The pressure may be easing in other areas of the economy. Gross domestic product shrank at a better-than-forecast 1 percent annual pace in the second quarter after a 6.4 percent drop the prior three months, and residential housing starts rose unexpectedly by 3.6 percent in June as construction of single-family dwellings jumped by the most since 2004, according to data from the Commerce Department.

Employers cut fewer workers than anticipated last month as the jobless rate fell to 9.4 percent from 9.5 percent in June - the first decline since April 2008, based on Labor Department figures.

Amid such glimmers of improvement, commercial real estate is a “particular danger zone,’’ said Janet Yellen, president of the Federal Reserve Bank of San Francisco, in a July 28 speech in Coeur d’Alene, Idaho.