NY Times Co. says it is in no hurry to sell Globe 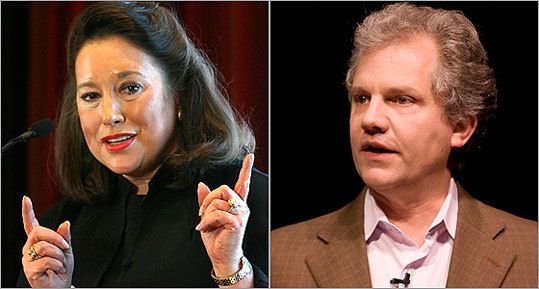 NEW YORK - The Boston Globe, once projected to lose $85 million this year, has been placed on a stronger financial footing that will allow The New York Times Co. to be patient in pursuing the newspaper’s sale - or forgo it altogether - the company’s top two executives said.

In an interview, chairman Arthur O. Sulzberger Jr. and chief executive Janet Robinson said deep concessions wrung from Globe unions, and other measures, have ended the crisis at New England’s largest newspaper and put it on the path to long-term survival.

They acknowledged, as the Times Co. confirmed in a government filing yesterday after weeks of news reports, that the company has hired Wall Street bank Goldman, Sachs & Co. to handle a possible sale of its New Eng land Media Group, which includes the Globe, the Worcester Telegram & Gazette, and their websites.

“We are exploring that as a possibility. It does not mean it will absolutely be the case,’’ Sulzberger said. “What’s important here is that the Globe be maintained as a viable business entity, whether it’s sold or we continue to operate it, and to make sure it has the financial stability to ensure its continuity. We’re committed to that.’’

Breaking their silence of several months, Sulzberger and Robinson spoke at length for the first time about one of the most tumultuous periods in the Globe’s 137-year history, set off by plunging revenues and the Times Co.’s threat to shutter the paper unless it gained $20 million in union concessions. They acknowledged that the turmoil was difficult and stressful for employees and the community, and expressed gratitude for the sacrifices made by workers. But they said they have no regrets about their handling of the Globe’s financial crisis, which ultimately stabilized the money-losing paper.

They defended the stewardship of the newspaper, which has won eight Pulitzer Prizes under Times Co. ownership, and addressed the challenges facing the Globe, the Times Co., and the newspaper industry, including charging for online content. They would not comment on bidders, offers, or a time frame for selling the Globe, but said price alone won’t determine whether to go ahead with a sale.

“We are sensitive to the impact of a potential sale on the community,’’ Sulzberger said, “and that would be something we would factor into our decision.’’

Sulzberger, a graduate of Tufts University in Medford, and Robinson, a Somerset native, also expressed affection for the Globe and pride in its journalism. They said they were always hopeful that management would reach agreement with unions. Still, they insisted, they would have followed through on the threat. The losses, after years of declining advertising revenues, had become unsustainable, they said.

The shutdown threat sparked anger among employees, and caused uncertainty among advertisers. Asked if the turmoil damaged the paper’s brand or journalism, Robinson said:

“I don’t think so. In fact, I think there has been so much support for The Boston Globe during this period of time . . . it’s been a reinforcing message to the Globe and to all the employees of the Globe about how important you are to that community.’’

Sulzberger and Robinson were interviewed in a conference room on the 16th floor of the new Times Co. building, a state-of-the-art structure with a high-tech feel that in many ways represents the dramatic changes that have swept through the newspaper industry.

The $600 million project was announced in 1999, when revenues and stock prices of media companies were strong. In March, less than two years after the building opened, the Times Co. sold its floors and leased them back to raise cash, one of several measures the company has taken to restructure its debt.

The Times Co. is also selling its 18 percent stake in the Red Sox and related properties. Robinson said a number of “very qualified buyers’’ have expressed interest, and the Times Co. expects to complete a deal by the end of the year. She declined to provide details.

The Globe was hit early and hard because of its heavy reliance on classified advertising, which quickly migrated to the Internet, and a weak New England economy, Sulzberger said. Key advertisers, such as Filene’s, disappeared in mergers.

The Globe was already restructuring, having launched another round of buyouts and layoffs when the national economy went into freefall early this year. Revenues plunged, and the Times Co., facing a projected $85 million loss at the Globe, called union leaders together in early April and threatened to close the paper if the company did not achieve major labor concessions.

Robinson and Sulzberger said the union meeting was confidential. When news leaked, they left it to the Globe’s senior management to communicate the situation, despite the uproar and criticisms of the Times Co.’s “no comment’’ policy. A common complaint among Globe employees was that the most senior Times Co. executives did not travel to Boston for a face-to-face meeting with employees at which they might have explained the paper’s financial condition and made the case for sacrifices.

Robinson and Sulzberger said they allow managers at individual units to run the operations and did not want to undermine Globe executives’ authority.

“We did what we thought was the right thing, and we still believe is the right thing,’’ Sulzberger said. “Coming up there and saying this is what New York is telling you to do would have been, one, not the way we operate, and two, would have exacerbated the situation and not helped alleviate it.’’

Robinson said the tough negotiations were not aimed at getting the paper in shape for sale, but only to address the losses. Sulzberger said they could not speculate on whether the Times Co. would make additional cuts at the Globe, because it’s unclear when the economy will rebound.

“It has to be a sustainable enterprise, and we have to do what’s necessary to make it sustainable,’’ he said. “It’s all our hopes that we have seen the bottom, or close to the bottom of this economic cycle and we can stabilize and perhaps even grow.’’

In addition to the union concessions, the Globe implemented a turnaround plan this year that included closing the Billerica printing plant and raising subscription prices significantly.

Ultimately, said Robinson, the Globe, the New York Times and other newspapers must find new revenues. The Times Co. is studying possible ways to charge for online content, although executives have made no decisions.

“We’re going to have twists and turns and going forward, with advertising being up and down, and paid models being examined and looked at,’’ she said. “But I think we’ve done a lot of good things to put the Globe on a good financial footing.’’