Where Jimmy’s stood, a Legal’s will rise 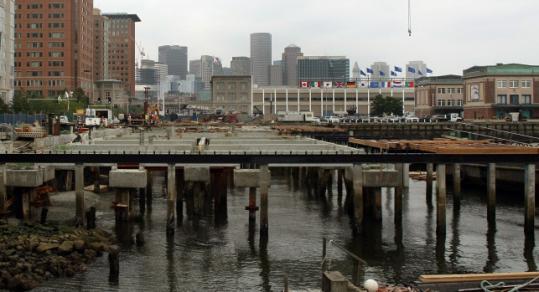 When the redevelopment of Jimmy’s Harborside began, Doulos family members faced a difficult choice: Fight to save the eatery they started in 1924, or surrender its prime location.

They tried to fight, but the price was too steep. The restaurant’s foundation was sinking into Boston Harbor, and its cavernous interior required top-to-bottom renovations.

Now, after nearly 85 years, Jimmy’s won’t be back. In its place will be a three-story Legal Sea Foods that its owners say will be the flagship of the chain.

“We’re going to call the complex Legal’s Harborside, and part of that is a tip of the cap to Jimmy’s,’’ said Roger Berkowitz, whose family founded Legal Sea Foods in Cambridge. “They really developed this site and made it what it is.’’

Today the Cresset Group, a real estate firm, will break ground for three new buildings that will accom modate top-shelf office space and four restaurants at the old Jimmy’s site. In addition to Legal’s, Cresset - which has the rights to develop the property - has signed up Zed451, an upscale grill with locations in Chicago and Boca Raton, Fla., to open at the location.

The changing of the guard at Jimmy’s reflects a larger transformation underway on the South Boston Waterfront, where small family-owned restaurants founded generations ago are being replaced by chains and high-end eateries.

“It’s sad. My parents used to work over there years ago,’’ Jimmy Klidaras, the owner of the nearby No Name Restaurant, said of the final passing of Jimmy’s Harborside. “This area is losing a lot, a piece of its history.’’

Like the Douloses, the Klidarases are Greek immigrants whose modest enterprise became a neighborhood institution. By contrast, the Berkowitzes parlayed the success of their first few Legal Sea Foods restaurants into a powerhouse chain, with outlets in nine states and the District of Columbia.

The new one on the Boston waterfront will be its largest yet - 20,000 square feet over three stories, with each floor offering a different ambiance.

Berkowitz said the first floor will be for casual diners seeking a quick cup of clam chowder and a plate of oysters. The second floor will be more upscale, with a white-tablecloth-like feel and fine dining options. The third floor, which is still being designed, will feature a large roof deck and bar with views of the harbor.

“This is not a restaurant we plan to replicate anywhere else,’’ Berkowitz said. “Since waterfront locations are so hard to come by, we felt it really needed to be something unique compared to what we’ve done at other locations.’’

With two more restaurants to fill at the property, Edward Nardi, president of Cresset Group, said his firm is trying to be sensitive to the need to have unique businesses in the area. “We’re trying to see what else is out there that’s not necessarily a chain,’’ he said. “We want to go slow and see what’s the best fit.’’

The Jimmy’s location is owned by the Massachusetts Port Authority. Cresset first teamed with the Doulos family to redevelop the crumbling property in the early 2000s.

“Keeping them there was a priority,’’ Nardi said, but “in today’s world, the buildout and carrying costs were a significant hurdle for them.’’

With the property deteriorating, Jimmy’s was demolished in early 2007 and the Douloses sold the liquor license to Legal Sea Foods. Still the family continued to explore ways to return to the site. Discussions with Cresset ended in the latter half of 2007, Nardi said.

Kim Doulos, the restaurant’s most recent chief executive, could not be reached for comment yesterday.

Her grandfather, Jimmy Doulos, was a 17-year-old Greek immigrant when he opened the restaurant as the Liberty Cafeteria in 1924. In 1955, he expanded the eatery and reopened as Jimmy’s, with a sign spelling out his name in giant red letters.

For decades, it was a Boston institution, offering a classic night out on the town that appealed to average diners who took comfort in its unchanging ambiance and fresh fish served for $15. As the decades wore on, its consistency became one of its quirks. It continued to serve uncomplicated food in wicker baskets at antique tables with lanterns for ceiling fixtures.

Meanwhile, across the street, the Berkowitzes opened Legal Test Kitchen in 2006. It features a back-lighted marble bar and modern table accents, touchscreen menus and docking stations for iPods, and serves Asian fusion cuisine. A couple blocks away at the Westin Hotel is Sauciety, which features seared scallops served with a vanilla bean beurre blanc.

As the once-barren Seaport District began to transform, Jimmy’s seemed to be more out of place. “Lifestyles have changed. People don’t have time for smoke-filled, two-martini lunches anymore,’’ said Vivien Li, executive director of the Boston Harbor Association. “Jimmy’s was geared toward businesspeople, but most people I know just eat their lunch at their desks.’’

The redevelopment of the restaurant property is now one of the few projects moving forward on the South Boston Waterfront. Nearby, developer Joe Fallon’s effort to transform the sprawling Fan Pier property into a 3-million-square-foot development is moving slowly because of tight credit markets.

Another stalled project is New England Development’s buildout of offices, a hotel, and retail stores on Pier 4, where another family of immigrants, the Athanases, continue to operate another Boston institution, Anthony’s Pier 4.

Michael Athanas said his family expects to be still serving baked stuffed lobster and other traditional fare in the new development.

A look at the transformation at the Liberty Wharf site.