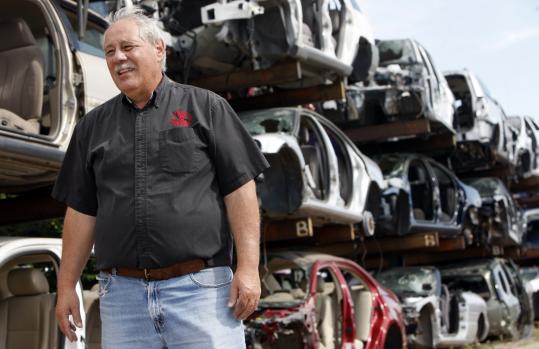 DENVER - Not all auto recyclers are relishing the government’s new cash for clunkers program, which requires car dealers to destroy the gas-guzzlers they get as trade-ins from new car buyers.

Used engines and drivetrains are a big part of recyclers’ income from each scrapped car, and under the federal program those engines must be destroyed. The idea is to promote fuel efficiency and help automakers, but it comes at a time when more than a dozen US auto parts suppliers have filed for bankruptcy this year.

“Why throw away good parts when the supply chain is in jeopardy? It doesn’t make a whole lot of sense,’’ said Michael Wilson, executive vice president of the Automotive Recyclers Association based in Manassas, Va.

Engines and drivetrains account for 60 percent of recyclers’ revenue from a used vehicle, Wilson said.

Under cash for clunkers, the government is advising car dealers to replace a trade-in’s engine oil with a sodium silicate solution and run the engine to ruin it before giving or selling the car to a scrap dealer.

The recyclers group says that can damage otherwise sellable parts like pistons - and mean smaller profits for scrap yards, considering it can cost $700 to $1,200 to process a car, including transport and removing toxic items like mercury, Wilson said. Recyclers’ profits vary but can reach several hundred dollars for a 6-year-old car.

It offers drivers who trade in qualifying vehicles up to a $4,500 credit toward a new, more fuel-efficient car from participating dealers. The government reimburses dealers.

The Colorado Automobile Dealers Association estimates the $1 billion program could boost sales 10 percent or so for its roughly 260 dealers before it ends Nov. 1 - earlier if the federal money runs out.

Some recyclers say cash for clunkers will hurt lower-income buyers who can’t afford a new car, even with the federal credit. They also claim that destroying vehicles will increase prices for spare parts lower-income customers depend on to keep their cars running.

“Now you’re removing cars people could afford, and they’re not available anymore,’’ said Norm Wright, chief executive of Stadium Auto and Truck Parts Inc., a Denver recycler. “There will be less cars to pull from, so the price of parts will go up.’’