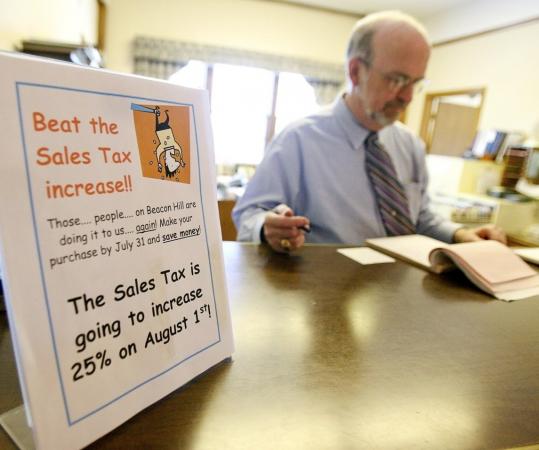 Struggling retailers in Massachusetts are rolling out huge discounts and blasting e-mails and letters to consumers, urging them to make big purchases before the 5 percent sales tax increases to 6.25 percent on Aug. 1.

“Those people on Beacon Hill are doing it to us again! Make your purchase by July 31 and save money!’’ proclaim the “Beat the Sales Tax’’ posters Westwood Furniture has plastered around its store.

Cityside Subaru recently sent a letter to customers with a chart depicting the hundreds of dollars in savings that would be achieved by purchasing a vehicle now, rather than next month. And the luxury bedding company WUL is throwing a “Summer Snuggler Tax Hike Special,’’ featuring 50 percent off of products at its Cambridge shop.

The tax increase applies to nearly all retail sales. Current exemptions, such as the sale of food (other than restaurant meals) and individual items of clothing costing $175 or less, remain in effect. But the state has repealed the exemption for alcoholic beverages purchased at shops; those, too, will be taxed at 6.25 percent starting in August.

The sales tax increase is expected to generate about $633 million and help plug holes in the state budget, but the timing couldn’t be worse for beleaguered merchants, coming at the start of what is expected to be a sluggish back-to-school season. The typical family is projected to spend about $548.72 on school merchandise, an 8 percent drop from last year, according to the National Retail Federation.

Some worried merchants, including Toys “R’’ Us, Sears, and Kmart, have started promoting Christmas specials to get ahead of the troubled economy.

Jon Hurst, president of the Retailers Association of Massachusetts, said another reason retailers are promoting sales now is that it is unlikely the state will hold its annual tax-free weekend in August because of the fiscal crisis.

“A lot of inventory needs to be moved in the next three weeks,’’ Hurst said. “Therefore, stores will need to further cut their margins and profitability any way they can to spur traffic and create incentives for purchases.’’

DePrisco Jewelers is having a sale for the rest of July at its four stores, encouraging consumers to put items on layaway for the holidays while the sales tax is still at 5 percent. And once the increase hits, the company is planning to look for ways to help absorb the tax increase on behalf of customers.

“We are trying to be creative. This measure really hurts retailers and consumers,’’ said Donna DePrisco, general manager of the jewelry chain, which is running radio ads to promote its sale. “Everyone has suffered.’’

Retailers in Massachusetts say the tax increase will hurt business not only by dissuading consumers from spending, but by sending more shoppers across the border to tax-free New Hampshire.

The Granite State, meanwhile, is fiercely protecting its shopping edge. New Hampshire Governor John Lynch recently signed a bill to prevent Massachusetts from collecting sales taxes from merchants based in New Hampshire that serve customers from the Bay State.

“The tax increase leaves a lot of us on the bordering towns at more of a disadvantage than ever,’’ said Steve Moran, of Dracut Appliance, a few miles south of the New Hampshire border. “More business for New Hampshire. And less dollars in my pockets.’’

Some customers are responding to Massachusetts merchants’ calls to spend now. Lured by the promotions, Eddie Ricarte’s grandchildren bought all their school supplies last week.

“In times like this, most people I know are looking to save wherever they can,’’ said Ricarte, who lives in Billerica, about 20 minutes from Nashua. He said he already buys beer and big-ticket items in New Hampshire and will expand his Granite State shopping list in August.

Purveyors of pricier items are also trying to appeal to customers who want to save.

Joyce Hampers, president of the Newbury Street League in Boston, is running storewide sales of 25 percent off of retail items through July 31 at her two spas, Emerge and G20.

Sallie Hirshberg, a partner in Galerie d’Orsay on Newbury Street, said she has sold six more paintings than usual by informing customers about the impending tax increase.

Tracy Jean-Chronberg, owner of WUL in Cambridge, said the increase might look modest on cheaper items, but it makes a big difference with her high-end comforters, blankets, and bedding.

“Just when people were starting to feel more comfortable and coming out of the not-spending closet, we get this tax hike,’’ Jean-Chronberg said.

Mass. retailers are rolling out discounts, advertisements before sales tax rises.
Your comment is subject to the rules of our Posting Policy
This comment may appear on your public profile. Public Profile FAQ