One man's imperative to give 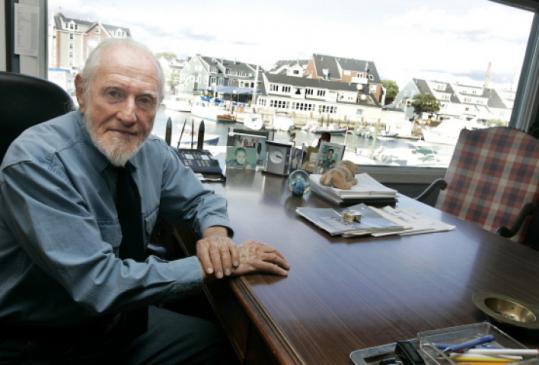 Robert I. Lappin used to be a familiar sight on Lafayette Street in Salem, where he would rollerblade to work from his home in Swampscott. The ponytail made him unmistakable. But Lappin is 87 now, and gave up the skates about a year and a half ago.

The former vacuum cleaner maker now drives a 21-year-old Mercedes to his office in Shetland Park, an old mill he converted into a bustling business center that transformed the Salem waterfront.

This week, Lappin honored a promise. He and his family donated $5 million to restore the retirement savings of about 60 employees of various family enterprises, including the Robert I. Lappin Charitable Foundation. The charity was almost wiped out when the Ponzi scheme run by Bernard Madoff collapsed. Lappin and his family had invested all of their employees’ 401(k) retirement plans with Madoff more than a decade ago.

“I am absolutely thrilled,’’ said Amy Powell, a former publicist for the foundation and one of the employees whose savings were restored. “I really knew in my heart, all my heart, that Mr. Lappin would do all he could do for his em ployees.’’

Lappin had invested so heavily with Madoff that it cost him much of his personal fortune. The foundation lost $8 million when Madoff’s assets were frozen last December, and for a time was forced to shut its doors. Lappin said that now, after Madoff and the payment to employees, his personal net worth is less than $5 million, about a tenth of what it was before the scandal broke.

Yet giving his own money to the employees was simply the right thing to do, he said. “At least from the feedback, they feel very grateful and happy, which makes me feel very happy,’’ said Lappin. “So far no kisses, but I have had some hugs.’’

Family and friends said Lappin feels an imperative to give. Over the years, that led him to sponsor 17 education, interfaith outreach, and family development programs under the umbrella of his namesake foundation. He has given more than $30 million to Jewish causes on the North Shore. After the Madoff scandal, he raised $450,000 to restore the foundation’s Youth To Israel travel program. It sent 82 Jewish teens on pilgrimages to Israel just last Sunday.

“He’s among moral giants,’’ said Rabbi Yossi Lipsker of Swampscott, director and founder of Chabad-Lubavitch of the North Shore, which runs Hebrew schools and other programs. Lappin, who helped the rabbi fund his center, “embodies the highest ideals of our traditions,’’ said Lipsker. “He’s a lover of his people. He’s a lover of the land of Israel.’’

Lappin’s story begins in 1910, when his father, John, came to Salem from Jerusalem, where he was studying to be a rabbi. He worked as a peddler, with a pack of goods on his back, stuffing his savings in a mattress. It was all lost in the Great Salem Fire of 1914.

The elder Lappin grew his peddler business in the aftermath of his loss. “He got a horse and wagon,’’ Lappin said, adding he used to hear stories about Queenie, his father’s horse. Later, he said, the senior Lappin went into the wholesale dried goods business in Boston, working until the day he died at age 86.

Lappin himself was born and raised in Salem and graduated from Dartmouth College in 1943. He served in the Navy during World War II and was a member of the fleet that accepted the surrender from the Japanese government. Later, he made floor polishers and vacuum cleaners under the name Shetland - for Shetland Road in Marblehead, where he lived before Swampscott. The brand was noted for television commercials showing how his machine could pick up a bowling ball.

In 1958, Lappin bought the shuttered Pequot Mills on the Salem waterfront, home of what was once the country’s largest manufacturer of sheets and pillowcases. “The feeling was at the time that it would have a serious impact on the economy of the city, because at one time there were thousands of workers that were employed there,’’ said Sam Zoll, a retired state chief justice and former mayor of Salem, who was then a member of the City Council. “Bob Lappin stepped up at a critical time for the city.’’

In 1968, Lappin sold the vacuum cleaner business, and a few years later, he established his Youth To Israel program. He chose to send Jewish teens on trips to Israel “because of my concern about Jewish continuity, and the realization that an Israel experience changes teenagers’ lives and how they feel about being Jewish like nothing else that they can do. This is the most effective thing that we can do for Jewish teenagers to enhance their Jewish identity,’’ he said.

It wasn’t until 1991 that Lappin started investing with Madoff, after hearing from a group of employees he had sent to New York to interview money managers. He had crossed paths with Madoff in the largely Jewish social scene in Palm Beach, Fla. “I knew him personally because I stayed at The Breakers hotel in Palm Beach in the winter, and he had a cabana there,’’ Lappin said. “So I used to see him quite often. I had a nodding acquaintance with him.’’

On Thursday, Dec. 11, Lappin called his son Peter, an executive of Shetland Properties Inc. The elder Lappin and his wife, Marion, were in Palm Beach when they received a call from the company’s portfolio manager. It was the news about Madoff.

“He said Madoff was arrested for fraud, and I immediately asked him how much,’’ said Peter.

Lappin wanted to fly directly home to Salem. His secretary, Lorraine Picano, made the arrangements for the next Monday. “He came right back, because he wanted to be here for us,’’ Picano said. “And then we had to deal with the fallout,’’ which meant months of nervous waiting to see whether they would be able to recover their savings.

Until the scandal broke, Lappin did not suspect anything was wrong with Madoff, who Lappin “used to see every now and then’’ and who was well-regarded in the community they shared. “The last thing I would’ve expected, particularly after eight SEC inspections of Madoff’s operation, is that he would be a fraud,’’ Lappin said. “I just trusted him as an outstanding person - we thought - as a Jewish person, as a businessman, and as a philanthropist.’’

Peter Lappin said the decision to replace the employees’ losses was immediate, and that he, his brother, and his sister all supported their father’s wishes. “You know what? The opportunity to build the wealth back will refund us,’’ he said. “We’ll recover to some extent over time.’’

Lappin said he couldn’t turn his back on his employees. Some had been with him for almost 51 years, as long as he’s owned Shetland Properties.

There’s another gift for which Lappin is known in Salem. At the corner of Essex and Washington streets is a city park named for his parents and built on a site donated by the philanthropist and his brother Stanley. Everybody knows it as the park with the statue of Samantha from “Bewitched,’’ something of a mascot for the Witch City. “I don’t know if there’s a nonprofit organization in our city that hasn’t received attention’’ from Lappin, said Kimberley Driscoll, mayor of Salem. “I think his generosity is boundless.’’

Sean Sposito can be reached at ssposito@globe.com.