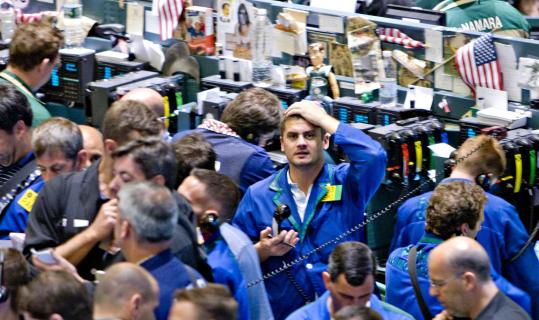 While most stock funds lost money last year, commodities trading advisers posted gains of 13.5 percent. Much of the trading in the world is done on the floor of the New York Mercantile Exchange. (Daniel Acker/ Bloomberg News)
By Tina Seeley Bloomberg News / July 8, 2009
Text size – +

WASHINGTON - Federal regulators say they might clamp down on oil and gas price speculators by limiting the holdings of energy futures traders, including index and exchange-traded funds.

The Commodity Futures Trading Commission will hold hearings this month and next to explore the need for government-imposed restrictions on speculative trading in oil, gas, and other energy markets, chairman Gary Gensler said yesterday in a statement.

The effect of speculators on oil prices has come under scrutiny on Capitol Hill. Senator Bernie Sanders, a Vermont independent, and Representative Bart Stupak, a Michigan Democrat, blame speculators for last year’s surge in crude oil prices to a record $147.27 a barrel and called for the commission to act to avert a repeat. Oil has climbed 41 percent this year in New York trading, while demand has dropped and inventories increased.

“Our first hearing will focus on whether federal speculative limits should be set by the CFTC to all commodities of finite supply, in particular energy commodities such as crude oil, heating oil, natural gas, gasoline, and other energy products,’’ Gensler said in the statement.

Among the questions the agency will ask is whether it needs additional authority from Congress to apply the limits across all markets, Gensler said.

The agency didn’t specify dates when the hearings would take place or who would be asked to speak.

“The CFTC has the authority to do a whole series of things to fix what’s wrong with these markets, they just have not had the will to do so,’’ Senator Byron Dorgan, a North Dakota Democrat who voted against Gensler’s nomination, said in a phone interview yesterday. It is the “first sign of life at the CFTC for a long while. We thought we were going to have to have a memorial service for that agency.’’

The Futures Industry Association, which represents the largest futures brokers, issued a statement saying it “would be concerned by any measures to bar legitimate participants from these markets or that would make it less efficient for US corporations to use futures as a tool for managing price risk.’’

He called the CFTC proposal “pretty vague’’ and said “speculation is what makes markets efficient.’’