With their hours slashed, some are struggling to fill the gap 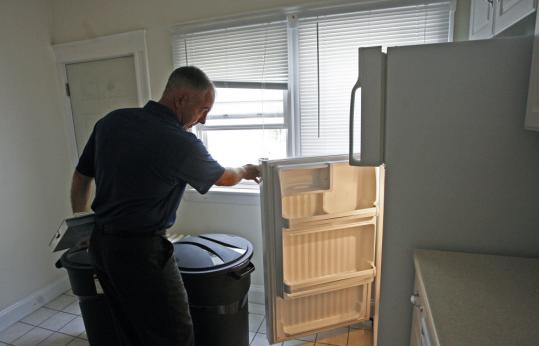 John Ferrara inspects a rental unit. The Revere housing inspector is among the city workers whose pay and workweek have recently been cut due to budget constraints. (Jim Davis/ Globe Staff)
By Irene Sege Globe Staff / July 5, 2009
Text size – +

REVERE - They still have their jobs, but the recession has not spared them.

In this seaside city north of Boston, housing inspector John Ferrara can no longer afford annuals or mulch for his garden. William Ash, the deputy director of community development, has trouble putting aside money for his teen sons’ college educations. Cheryl Leon, a paralegal in the city solicitor’s office, has stopped giving her three children allowances.

In a downturn dominated by layoffs, only scant attention has been paid to the lesser victims, the ones who keep their jobs, but with fewer hours and lower pay. They are part of a dramatic spike in the number of Americans involuntarily working part time - a figure that far surpasses the increases in part-time labor noted in previous recessions. For Ferrara, Ash, and Leon, that means a four-hour reduction in their workweek and weekly paychecks that are $100 to $150 thinner.

“I’m very lucky to still have a job, but it’s a huge impact on my family,’’ says Leon, 40, of Revere. “You think about it when you shop, what you buy. You think about clothes shopping and what my kids might want. My 14- and 16-year-olds are working where I might not have pushed for them to work through the summer. It’s important that they understand they have to contribute as well.’’

The current jump is driven not by people who can find only part-time work, but by folks like the roughly 100 Revere municipal workers who have had their hours cut, either since February or starting this month.

Almost 7 million people, the Bureau of Labor Statistics reports, have seen their hours reduced, up from 3 million in 2007. They’re bargain-hunting more and eating out less. They’re using the found time to catch up on chores, go to the beach, or moonlight.

For the economy as a whole, the glut of part-time workers could slow any recovery.

“At no time have we ever seen an increase of that magnitude, which is why labor markets are far weaker than the unemployment rate is telling us,’’ says Andrew Sum, director of Northeastern University’s Center for Labor Market Studies.

“When the economy turns around if you have so many people that are in slack work, you’ll say, ‘I don’t need to hire anybody new. I need to work my existing workers more.’ It’s going to be a lot harder to bring the unemployment rate down.’’

The reasons behind the big increase are unclear. Employers may worry about laying off experienced workers. Demographics might also be a factor.

“There’s a big bulge of older workers, people with skills that you value, so it would make more sense to try to keep someone like that on staff,’’ says Dean Baker, codirector of the Center for Economic and Policy Research, a nonpartisan think tank in Washington, D.C.

That’s what Adrian Fuchser, general manager of Schneeberger Inc., a high-tech manufacturer in Bedford, thought this spring when he put his office staff of eight, including himself, on a four-day workweek rather than lay off three people. The company registered for the state’s WorkSharing program, making employees eligible for unemployment benefits for the hours lost, which means their pay is down 10 percent instead of 20. “I don’t want to lose the talent,’’ Fuchser says. “Once the economy is picking up, I would miss them.’’

His operations manager, Linda Aylward, 41, of Melrose, now carefully sticks to shopping lists. “And I stay out of the mall,’’ she says. “If anyone knows me, they know I’m a mall person. Stay out of the mall - rule number one.’’

Her colleague, customer service representative Kelli Hooke, has cut back her cable service, persuaded her landlord to postpone an anticipated rent increase, and found occasional baby-sitting jobs. “Concerts and stuff like that - who can afford to continue to do that?’’ says Hooke, 40, of Burlington. “Dave Matthews, my favorite, was at Fenway. Last minute somebody had $100 tickets. I couldn’t justify spending that.’’

The surge in part-time numbers also reflects a trend Susan Lambert, an employment specialist at the University of Chicago, has seen over the past two decades. Businesses, using computer systems and other methods, adjust staffing quickly to accommodate shifts in demand.

“Firms have new tools to keep that link tight,’’ Lambert says. “Even before the recession, especially in service industries, you would see that when sales go down in stores, workers are sent home.’’

Sarah Mayer, 20, who is entering her junior year at Massachusetts College of Art, has worked at Eddie Bauer in Burlington for four years. The company filed for bankruptcy protection last month, but Mayer saw signs of trouble earlier. She gave up her apartment in Lowell over the winter and moved home to Tewksbury after her weekend hours dropped from 16 to 11. She had expected to work full time this summer but instead pulls only about 20 hours a week. Last summer, she made $750 to $800 every two weeks; this summer, she earns $450 to $500. She’s tried without luck to find an additional part-time job.

Back in Revere, Mayor Thomas Ambrosino cut the hours of 45 municipal employees in February and last week announced that, at least until Labor Day, City Hall will not open its usual half-day on Fridays.

Kevin Dacey, 39, principal clerk in the city auditor’s office, has lost $100 a week to reduced hours. “You try to look at the sales at the supermarket,’’ he says. “I still have to do my job. Most days I work through my lunch hour so I can make up the hours. I used to stay late. I try not to do that.’’

Board of Health secretary Noreen Cristiano, 60, feels the pinch, too. Yet the extra free time brings a bright side.

“Let me put it this way,’’ Cristiano says. “I’d love to have the hours back, only because I’m working toward my pension. But it’s an absolute silver lining spending time with my grandchildren.’’

Irene Sege can be reached at i_sege@globe.com.