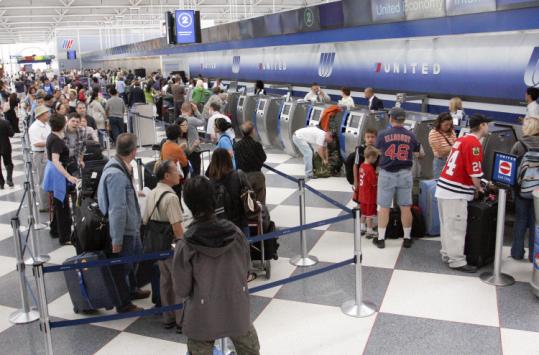 The outage affected all of United’s computers at the airport and also caused about 100 flights to be canceled as of yesterday afternoon, said airline spokeswoman Robin Urbanski.

At one point, the airline instituted a “ground stop,’’ keeping United flights bound for O’Hare grounded if they hadn’t taken off yet, said Federal Aviation Administration spokeswoman Elizabeth Isham Cory. She said the glitch affected the boarding pass system and the computers that tell pilots the number of passengers on board and weight of the plane, which affect how much fuel an aircraft can carry. “You need that to take off,’’ she said.

At the peak of the problem, at least 1,000 passengers stood in lines at O’Hare, and planes lined up on the tarmac. Passengers flying into or out of O’Hare were being allowed to change their reservations free of charge.