Minority executives find support and direction from faculty and one another 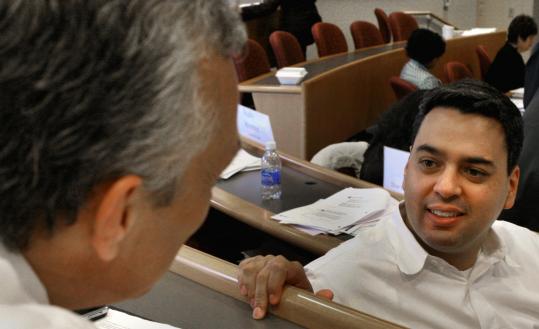 Ursula M. Burns takes over as chief executive of Xerox Corp. today, making her the first African-American woman to head a Standard & Poor’s 100 company. Harvard Business School professor David A. Thomas is impressed by Burns’s ascension. But not that much.

“When you consider all the women of color that went into the pipeline for these jobs 25 or 30 years ago, having just one rise to the top means we have a long way to go,’’ said Thomas, who is also the business school’s faculty chair.

Last week, Thomas and his colleagues at Harvard kicked off Next Generation Executive, a program aimed at improving that track record in corporate America. Nearly 30 minority executives from around the country were invited to be part of the first class and spend a week attending intensive sessions at the school aimed at helping them advance even higher. The sessions will be followed up with six months of coaching and culminate with a retreat in Naples, Fla., in December.

“It’s always healthy to get together to exchange ideas with people who are facing similar challenges,’’ said Rudy Wynter, a senior vice president for customers and markets at National Grid PLC in New York, an electric utility. Wynter, who is African-American, was one of 28 executives invited to participate in the program. “Clearly, we’re learning from the faculty at Harvard, but we’re also learning from each other.’’

The Partnership Inc., a Boston-based workplace diversity organization, is partnering with the school to sponsor Next Generation Executive. While in Cambridge, the executives participated in sessions on subjects ranging from managing talent to emerging markets. The costs were paid by the executives’ companies.

“There’s a misconception that there’s not enough talent in the pipeline,’’ said Beverly Edgehill, president and chief executive of Partnership. “We see that the talent is there - what we needed to do was bring them together and get them poised to take the next step.’’

But Lee H. Igel, an assistant professor at New York University who specializes in management and organizational behavior, said programs like Next Generation Executive “may be based on old assumptions.’’ Igel stopped short of proclaiming that corporate America is now “post-racial,’’ but he said everything from Burns’s appointment to the election of Barack Obama as president show significant progress has been made in breaking down racial barriers.

“Those kinds of changes - whether they be at Xerox or in government - have all happened with more of a whimper than a bang,’’ Igel said. “There hasn’t been one event we can point to and say, ‘That’s when everything changed.’ ’’

Harvard’s Thomas, who has studied workplace diversity for 25 years, said African-American and Hispanic professionals are far more likely than their white counterparts to leave corporate jobs to take executive-level positions in education, at nonprofits, and in government.

“They have the talent to be executives, but feel they have to do so in other sectors. . . . The next step is to work with companies on creating an inclusive environment,’’ he said. To move toward that goal, Next Generation Executive includes activities aimed at discussing how minority executives can help create those types of environments in their organizations.

Thomas said that unlike most programs of this kind, Harvard’s is not targeted at entry- or mid-level minority employees. Also, he said, the executives will get six months of follow-up coaching with a faculty mentor.

“That, in my opinion, is one of the most valuable components,’’ said Eduardo Tobon, managing director of credit and debit cards in the United States for Sovereign Bank and a participant in the Harvard program. “I’ve been to programs at Harvard in the past, but this one is unique in that we continue to get feedback as we work to implement what we have learned.’’

Over the course of the week, executives undertook a personal assessment in which they discussed feedback from their superiors, peers, and subordinates that they collected before they arrived. For Phyllis Jarrett, a Los Angeles-based strategic accounts vice president with Cardinal Healthcare Inc., the process helped her better understand how she is seen in the workplace.

“The program really just builds on what is already in place,’’ Jarrett said. “It’s really an opportunity to assess where you are, and it provides a road map for accomplishing the goals you want to achieve.’’

But Igel suggested a lack of diversity in companies’ executive suites may stem more from internal policies than a lack of minority talent ready to take the helm.

“My sense is that it’s more of a hiring issue within the organization than a social issue. I think the question needs to be: When it comes to minority hiring, are you making the right kind of hires?’’ Igel said. “It’s not because these companies have racists and bigots. It’s just a matter of them not putting the right people in the right places.’’