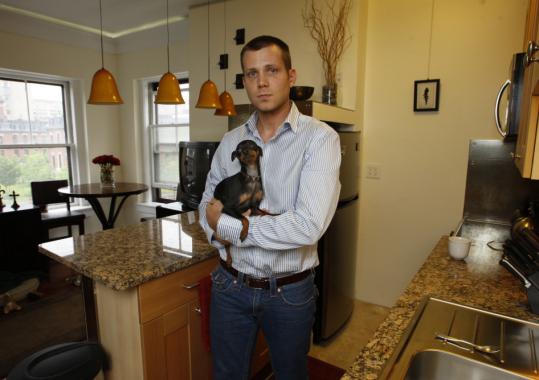 Justin McGuffee relocated to this one-bedroom apartment in the South End, where he pays $300 less per month than for his last apartment, in the Back Bay. (Matthew J. Lee / Globe Staff)
By Megan Woolhouse Globe Staff / June 19, 2009
Text size – +

It’s a good time to be a renter in and around Boston.

Apartment vacancy rates in the metro area are climbing to new highs, pushing down rents after nearly a decade of increases. The shift is tilting the balance of power, and now landlords are chasing after prospective renters, showering them with deals.

Archstone Avenir, a new luxury Boston high-rise where studios rent for $2,400 a month, is offering a free month’s rent. At the Lodge at Foxborough, a luxury apartment community by Gillette Stadium, the lure is two free months. In Waltham, Archstone Cronin’s Landing - which charges $1,995 for a one bedroom - has dropped its $525 a month “amenities fee’’ for vacant apartments.

Even units with coveted views are being discounted. A sprawling two bedroom with a sweeping view of the Charles River rents for $4,875 a month at Avalon at the Prudential Center, down from $5,200 a year ago.

Justin McGuffee, 29, said he recently scored a bargain on a South End apartment. He signed a six-month lease on a one bedroom for $300 less a month than his last apartment, in the Back Bay.

“It’s about the same size as my other apartment, and both were newly renovated,’’ McGuffee said. “But it was such a huge difference. Three hundred bucks a month is crazy!’’

Rents are falling because of the region’s rising vacancy rate. According to the real estate market research firm Reis, vacancy rates rose to 6.4 percent in the first three months of 2009 and are expected to rise as high as 7.6 percent by the end of this year.

Already, the average monthly rent has fallen to $1,644 during the first three months of the year, down from $1,651 last year, according to Reis.

“A 7.6 percent vacancy is the highest we’ve seen in the Boston area,’’ said Ryan Severino, an economist at Reis. “In my mind, that presents a pretty strong renter’s market.’’

Still, Boston rents are among the most expensive in the country primarily because the supply of apartments has always been low. Some years finding an apartment in the city has been nearly impossible. In 2000, when the state’s unemployment rate was below 3 percent and the high-tech bubble had not yet burst, the Boston metro area vacancy rate was 0.7 percent, the lowest in the last decade.

The landscape has changed dramatically since then. This year, nearly 1,000 new apartments have become available, Reis reported, and 3,456 apartments are under construction. New development includes apartments at Charles River Landing in Needham, the Lodge at Foxborough, and The Clarendon in Boston.

Apartment supply has also increased because more condo owners, unable to sell their units in a slumping housing market, are opting to rent them.

But Nicolas P. Retsinas, director of the Joint Center of Housing Studies at Harvard University, said the impact of the economic meltdown and a high rate of joblessness have affected all sectors of the housing market.

Rental vacancy rates usually climb alongside the unemployment rate, he said. When people aren’t working, they double up in apartments to save money or move in with family.

Meanwhile, renters who have steady jobs are moving out to take advantage of the $8,000 first-time home buyer’s tax credit being offered by the federal government.

“Just drive down the street, and you’ll see more ‘For Rent’ signs than you did previously,’’ Retsinas said.

Matthew Petty, a real estate agent at Exit Realty Associates in Brighton, said he’s been working harder and showing more apartments, yet many of his listings have remained vacant for longer than usual.

On a recent afternoon, he showed three: a fourth-floor walk-up on Endicott Street in the North End ($1,750), a one bedroom within walking distance of Cleveland Circle in Brookline ($1,295), and a Brighton condo put up for rent by its owner ($1,675).

Petty said the North End apartment is normally an easy sell. It sits just two blocks from Hanover Street’s restaurants, bars, and bakeries, and with 615 square feet of space, is much larger than many other apartments in the neighborhood. So far no takers after two months on the market.

“I’ve never had it lapse before,’’ Petty said. “Now it’s just sitting there. We’re barely able to get anyone to look at it, never mind rent it.’’