Flagship location and other sites will be considered 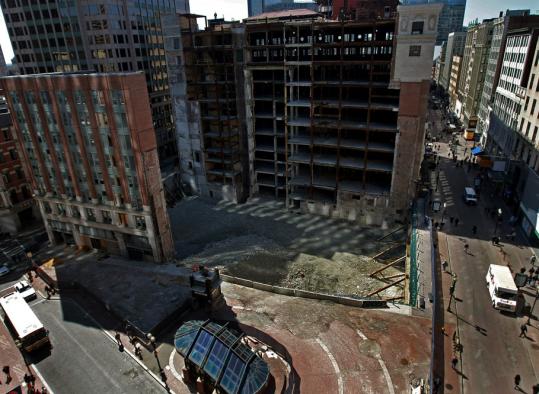 Discounter Syms Corp., which won a bid on Monday to buy bankrupt Filene’s Basement, intends to return the bargain brand to its flagship store in Downtown Crossing or another location in the neighborhood, according to a local official with knowledge of the plans.

Syms offered $62.4 million for the beleaguered business in a venture with New York real estate firm Vornado Realty Trust and Gale International, the two firms that own the downtown Boston property where the Basement has operated for more than 100 years. That location has been closed since 2007 because of a stalled $700 million redevelopment project that has been unable to secure financing.

“Syms has every intention of having a store in Downtown Crossing. That’s something they feel is important,’’ said the official, who is not authorized to speak publicly about the deal. “If they can work out a deal with Vornado for a new lease, that’s great. But it’s very uncertain whether Vornado can even deliver that site within a normal period of time. They want to get something open in Downtown Crossing as soon as possible.’’

An executive involved with the redevelopment project said Gale and Vornado teamed up with Syms as a way to reclaim the Downtown Crossing lease, which includes about 90,000 square feet of space at about $2.28 per square foot. The current lease runs through 2024 and requires Gale and Vornado to pay Filene’s Basement $500,000 a month until the flagship can reopen again in the redeveloped site. Those payments were halted without explanation earlier this year.

With the development on hold, it would likely take at least two years to reopen the Filene’s Basement store, meaning Gale and Vornado would have to pay an additional $12 million during that period, an obligation they erased by participating in the acquisition.

“Now, we can start fresh, get the space back, and control who the tenant is,’’ said the executive involved. “It basically allows us to stop the bleeding.’’

The executive, who was not authorized to speak publicly, said the developers are open to signing a new deal to bring Filene’s Basement back to the location, but that depends on whether Syms is willing to pay a higher rent. “Whoever comes in is going to have to pay a market rate’’ of up to $30 per square foot, the executive said.

Details of the acquisition are not yet available, but a bankruptcy court judge is expected to approve the nearly $63 million offer today. The sale also includes 23 stores, the Burlington headquarters, the Auburn warehouse, and leases in the Back Bay, Braintree, Newton, Peabody, Saugus, and Watertown.

“It is a cherished anchor for Downtown Crossing. So we’re hopeful the Vornado/Syms acquisition will bring about the return of this very important institution,’’ said Rosemarie Sansone, president of the Downtown Crossing Association, a group of local businesses and residents. “The Filene’s Basement brand and our brand are very, very connected.’’

Sansone said there is at least one large property available if the legendary merchant looks for another location in Downtown Crossing, including the former Barnes & Noble space on Washington Street. Filene’s Basement officials had rejected the site as a temporary shop while the flagship was shuttered because of logistical problems and the cost of renovations.

Druker said it wouldn’t make sense to buy into the acquisition and not reopen the Basement. “I certainly would want them as an anchor in any development I were doing,’’ he said.

Filene’s Basement filed for Chapter 11 bankruptcy protection in May following mounting financial struggles with underperforming stores, the credit crisis, and the loss of the Downtown Crossing store, which represented about 20 percent of sales.

Retail Ventures Inc., which owned Filene’s Basement before the May bankruptcy and whose holdings consisted mainly of Filene’s Basement, yesterday reported a $51.9 million loss from operations for the quarter ending May 2, compared to $45.9 million in income for the same period the previous year.

View a photo history of Filene's Basement
Your comment is subject to the rules of our Posting Policy
This comment may appear on your public profile. Public Profile FAQ