The climate is tougher, but some are persevering to launch businesses 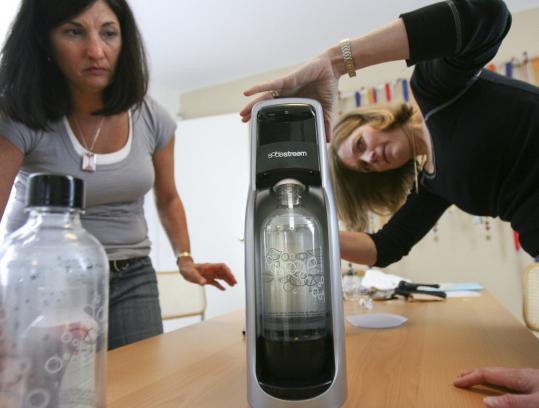 Sitting in their new Cambridge restaurant, Tupelo, on a busy weekend night, Renee “Petsi’’ McLeod and her husband, Mike Walker, are surrounded by concessions to the recession: the dishwasher that was repaired rather than replaced, the chairs bought at a restaurant auction, the entrees that top out around $15.

In South Boston, Geoff Chapin is shifting strategy at his new home-energy-efficiency company to deal with the tough economy. His business, Next Step Living, was originally aimed at homeowners and businesses; now it’s also reaching out to cities and towns that may be spending federal stimulus money.

And Jules Pieri, founder of the Daily Grommet, an adventurous e-commerce/social networking company in Lexington, has been dancing to the downturn almost since the day she launched in October, right into a marketplace rocked by teetering banks and a plunging stock market. Pieri’s young company has lowered prices and altered its product mix.

From tight credit markets to consumers who won’t spend, the climate for new enterprises has looked bleak for much of the past year.

Yet for these new owners, there was no time like the present to take the leap and start a business. Either by accidents of timing, an abundance of confidence, or by necessity, a growing crop of fledging companies are opening their doors even as numerous other businesses are closing down or cutting back.

There’s no question about how tough the economic climate is for new companies. “It’s just harder,’’ said Mark Allio, regional director of the nonprofit Massachusetts Small Business Development Center Network at the University of Massachusetts at Boston. “What really makes a difference is the lack of credit. There’s just less capital available, and it’s harder for new businesses to get the credit they need.’’

The harsh climate is reflected in the statistics. Total incorporations in Massachusetts during the first four months of 2009 were down to 7,397 from 8,456 for the same period in 2008.

“What we’re seeing with start-ups reflects the vacancies we can all see on almost any Main Street,’’ said Massachusetts Secretary of State William Galvin. “It’s just more evidence of the brutal economy we’re all dealing with.’’

Yet according to the US Small Business Administration, the number of loans the agency guaranteed for Massachusetts start-ups - companies less than two years old - is growing after a significant dip during the last three months of 2008, from 136 loans for the same period in 2007 to just 52 loans at the end of last year.

From January through March of this year, the number increased to 75 loans, with the pace picking up significantly after the Obama administration’s recovery and reinvestment plan took effect in mid-February. In April, the number of loans the SBA guaranteed for Massachusetts start-ups was approaching a pace not seen since before the downturn, with 35 loans approved in that month alone.

Allio is not surprised that a hardy cohort of entrepreneurs are undeterred. “They’re opportunity-driven and resolute,’’ he said. “Tough as it is, they feel it’s their time.’’

McLeod launched her first bakery, Petsi Pies, in a sliver of a space on a forlorn block in Somerville in 2003. She has since added another bakery in Cambridge, and has grown a sizable catering business.

So when she and her husband got the opportunity last spring to buy a popular Inman Square restaurant location, they jumped at the chance. “It was a different time then, not as bleak,’’ said McLeod.

Then the downturn happened. Instead of the bank loan they were planning on, they arranged private financing from the seller; Walker did much of the renovation work instead of hiring contractors. McLeod designed a menu that featured less expensive “small plates’’ and “side plates’’ in addition to entrees.

“We decided to make our money on volume rather than on the margin for individual items,’’ Walker said. “We’re banking on the fact that once you try our food, you’ll have to come back.’’

When Chapin began planning Next Step Living in early 2008, it looked nearly recession-proof. The high cost of fuel was making it economically advantageous for consumers to increase the energy-efficiency of their houses, but there weren’t “players at scale helping people take advantage of that,’’ Chapin said. “We wanted to help identify the savings, and make it easy for consumers to do a one-stop shop.’’

Next Step Living was able to raise start-up capital from angel investors and private investors. But by last fall, when they started rolling out a viral marketing campaign, the recession was taking its toll.

“Investing to save money on future energy needs is not high on people’s agenda if they are worried about keeping their jobs,’’ Chapin said.

Fuel prices also started falling, bringing down the potential payoff for increasing efficiency. Chapin remembers seeing a headline that appeared in The New York Times in September: “Economy to Entrepreneurs: Turn Back.’’

He didn’t, and the reason was “time pressure,’’ he said. “I believe that the climate problem will get resolved one way or the other in the next 10 years. If I don’t get involved in the next few years, it will be too late to make a difference.’’

Chapin also made “a big bet’’ that the climate crisis would help free up sources of funding, a belief reinforced when the Obama administration began crafting a stimulus plan for cities with an emphasis on energy conservation and green jobs.

By the time he started raising a second round of financing earlier this year (“in the worst time to raise money since 1933,’’ said Chapin), he had added services to help cities come up with a stimulus plan and create green jobs. It worked.

“There was intense interest in the home energy space, and investors believed that the stimulus plan would make a difference,’’ he said.

Pieri has also been making adjustments to her start-up, the Daily Grommet, in an effort to improve its odds for success. Her idea for a new kind of online retailer, which blends e-commerce - selling unique consumer products online - and social media, attracted $500,000 in investment last summer. But by the time she launched in October, the environment had changed.

“The stock market was literally crashing when we went live,’’ she said.

On the bright side, there would be less competition and an opportunity to “line things up for a recovery.’’ But she also adjusted her retail strategy to match the new economic reality.

“Our original price point for a featured item was between $45 and $50,’’ she recalled. “Now, it’s closer to $40,’’ and instead of luxury items and accessories, the focus is more on “practical, problem-solving products.’’

After six months, Pieri believes the site’s traffic and revenue numbers are good enough to justify raising another round of financing, a convertible note between $750,000 and $1 million.

“We’re halfway there,’’ she said. “But it’s definitely harder.’’

That doesn’t dim the optimism a bit. “We expect to be a $50 million company in five years,’’ she said confidently.