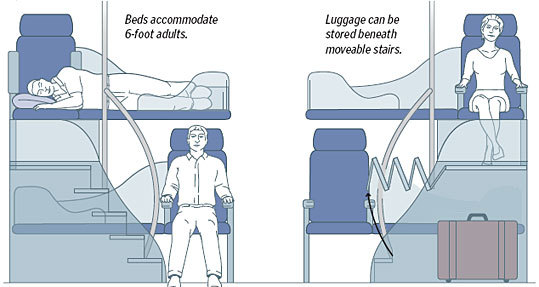 CAMBRIDGE - Emil Jacob was lying on the floor of an airplane when inspiration struck.

During a flight from Bucharest to Paris, Jacob had the good fortune to have three seats to himself, but he couldn't stretch out because the armrests were locked in place. So Jacob, a veteran of many long, cramped flights to his native Romania, put his sweater on the floor and settled in for a snooze.

When he woke up, he started contemplating the space above him.

"I was looking up at all the height, and I thought it was absurd that people are suffering down here," Jacob said. "Just a couple of steps away there is a lot of space and comfort."

So Jacob, a financial data analyst by trade who on the side runs Jacob-Innovations LLC, of Cambridge, got to work on ways to take advantage of the unused vertical space.

He eventually came up with the "step seat principle." It involves elevating alternate rows of seats, from one to five steps above the cabin floor, to give passengers more room to lean back in economy class and enough space in business class to lie down, either by sliding their legs under the seat in front of them or stretching out in pods stacked on top of each other - no sweater on the floor required.

People who regularly fly coach know there is room for improvement.

"Anyone that's trying to make the economy-class seating better is a savior, in my opinion," said Matt Daimler, founder of SeatGuru.com, a website dedicated to airplane seating.

Jacob, 41, does his design work in a Cambridge apartment with lace curtains on the windows and classical guitars on the wall, where he lives with his wife and 8-month-old daughter. He received a patent for the seat design in 2006, but has been able to devote more time to it lately - he was laid off in March from his job at an economics consulting company in Lexington.

The simplest version raises every other row of economy seats by 7 inches, a standard step height, allowing passengers to recline seats at up to a 45-degree angle (a few inches more than the 3 to 5 inches that's standard in economy, Daimler said) and elevate their legs on a foldable footrest that takes advantage of the space underneath the seat in front of them. It's a more "sleepable position," Jacob said.

The other economy seat is two steps up and can recline a few additional inches, with room under each seat to store luggage. Each seat can be partially encased in a fixed shell, with side panels for more privacy, "so that somebody doesn't snore in your face," Jacob said.

SeatGuru's Daimler sees a market for these kinds of improvements in premium-economy seating, which falls between economy and business class. Right now, he said, "The seat feels like economy; the price feels like business."

With Jacob's business-class seat design, passengers can lie flat. The most complex model, intended for the largest Boeing and Airbus planes, has two levels of seats, one five steps above the other, with full sleep compartments attached to each one. Two of the sleeping seats, called a Flex-Seat, can be transformed into three economy seats on shorter flights.

Elevating every other row of seats means the rows can be installed closer together than they currently are in business class or in premium economy, Jacob said, allowing more seats to fit in the same area. Adding an upper deck of seats increases seating capacity even more.

"The core idea is to use the steps . . . to take advantage of the vertical space," he said.

"I could see where an idea like that could be very viable on long-haul larger aircraft," Roseman said.

Jacob's stacked seating modules have some drawbacks, he said, such as restricting visibility in the cabin and potentially slowing evacuation times. Still, he said he thinks airlines will be interested.

Jacob said he is in talks with a few airlines, although he would not say which ones. If one decides to use his design, he estimates it could take up to three years to implement. As for the price: "The higher up you go [using vertical space], the greater the cost."

He also has patents pending for an ergonomic accessory for a computer mouse, a shoe sole that helps blood circulation, and a vertical-axis windmill. But for now, he's banking on his airplane seats.

"It's a small step in both senses - both the actual step and the figurative one," he said, "that could change the comfort in airline seating."

Katie K. Johnston Chase can be reached at johnstonchase@globe.com.

See three designs on how to maximize leg room.