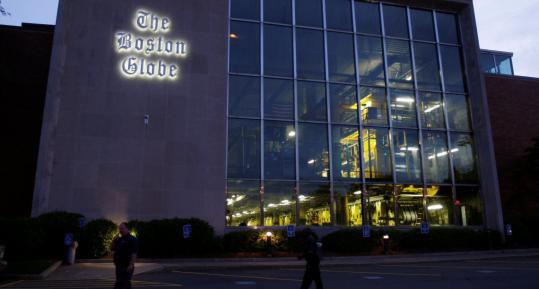 Three Boston businessmen - a Boston Celtics owner, a former advertising mogul, and a member of the family that ran the Globe for generations - have emerged as prominent potential buyers of the Globe, according to people knowledgeable about their interest in the city's leading daily.

Actively mulling bids for the newspaper, according to these people, are Stephen Pagliuca, a private equity executive and Celtics co-owner; Jack Connors, cofounder of a major advertising firm and chairman of Partners HealthCare; and Stephen Taylor, a former Globe executive and member of the family that sold the Globe to the New York Times Co. in 1993.

The sources, who requested anonymity because they are not authorized to comment on the potential bids, said the three businessmen are in various stages of reviewing the Globe's finances and assembling investors who could be part of their groups.

But whether these men will actually make formal bids on the newspaper is not known. Decisions may be delayed until the standoff between the Times Co. and the Boston Newspaper Guild, the Globe's largest union, has ended, according to the sources with knowledge of the bidding process. And at least one of the three interested parties, Jack Connors, is still weighing whether he will proceed, according to one source knowledgeable about his thinking.

"The Steve Taylor group continues to be interested and is likely to continue trying to raise the money to buy the Globe. And Jack Connors has certainly been interested," the source said. "But he's trying to decide if he is going to go forward."

The three names emerged yesterday just one day after potential buyers confirmed that the Times Co. has hired the Wall Street firm Goldman Sachs to manage the potential sale of the Globe and is planning to seek bids for the newspaper in the weeks to come.

All three potential bidders declined to comment about their interest in buying the newspaper.

"Like a lot of other readers and concerned citizens of Boston, I have high hopes for the future of the Globe," said Taylor. "I wish them well and have no comment on a possible acquisition."

The three businessmen said to be considering a play for Boston's 137-year-old newspaper have diverse backgrounds but share deep roots in the community and region.

Pagliuca, 54, was born in Framingham, played basketball at Duke University, and rose to the top echelons of the private equity world after earning his master's degree in business administration at Harvard and doing stints in accounting and consulting.

He's known in financial circles for his role as managing director at Bain Capital, the Boston buyout firm that Mitt Romney ran before he became governor, taking a leading role in such leveraged buyouts as Hospital Corp. of America and Burger King. But Pagliuca is also known in Boston's sports world as part of the ownership group that bought the Celtics in 2003 and helped lead them to a championship last year. And he has some experience in media investing. He helped start Information Partners at Bain Capital, a media technology venture fund, and sits on the boards of the Weather Channel and the Gartner Group, a research and publications company.

Connors, a 67-year-old Roslindale native who now lives in Brookline, made his name as a prominent Boston advertising executive. He sold the Hill, Holliday, Connors, Cosmopulos agency he cofounded in 1998 for more than $115 million, and has a net worth estimated at $500 million, according to published reports. He is chairman of Partners HealthCare, the region's largest hospital system, is a major philanthropist and has been a forceful player in business matters across the city for many years. Connors has expressed interest in buying the Globe before, making his interest known in 2006.

And then there's Taylor, 58, a cousin of past Globe publishers and a former Globe executive who left the newspaper nine years ago. Taylor, who lives in Milton, started at the Globe as a summer intern in 1971, joined the paper full time in 1980 and stayed for 20 years, becoming executive vice president of the paper and president of Boston Globe electronic publishing.

As lecturer in media at Yale University, Taylor has kept his hand in journalism in recent years, teaching a course on the economics and financing of journalism. Taylor also has connections to the world of finance, heading up a small private investment office called Densefog Group LLC.

Spokespeople for both the Times Co. and the Globe declined to comment yesterday. Also yesterday, a person connected to the Intercontinental Real Estate Corp. refuted a report that the real estate investment and management firm is interested in buying the Globe. This person, who requested anonymity because he was not authorized to speak about the matter, said the report in the Boston Herald was not accurate.

If the Times Co. were to sell the Globe, it would mark the end of a relationship that began in June 1993 with smiles, handshakes, and a press conference at the Parker House. The deal was not only the largest ever paid for a newspaper - $1.1 billion - but was seen by many as a merger of two of the most prominent American newspaper families: the Sulzbergers and the Taylors.

Dubbed a "royal marriage" by some at the time, the relationship paid off through much of the 1990s as the Globe continued to reap high advertising revenues, especially through its classified department. However, as internet advertising became more common about a decade ago, and newspaper circulation started to fall as more people began to get their news online, revenue at the Globe and most other papers fell rapidly.

Two months ago, these problems came to a head when the Times Co. threatened to shut down the Globe if the paper's unions didn't agree to $20 million in concessions through steep wage cuts and other measures. Most of the major unions have since ratified the cuts, making the Guild, the Globe's largest union, the last holdout when its members narrowly voted down concessions Monday.

The Times Co. has since imposed a 23-percent pay cut, effective Sunday, and the union has filed unfair labor practice charges against the company. The two sides will meet again Monday, with the financial fates of nearly 700 Globe staffers unclear.

The ongoing battle is giving some potential bidders pause, according to people with knowledge of the process. However, an expert in media mergers and acquisitions said he expects the Times will find a buyer for the Globe, given the cuts the Times Co. has demanded and won.

Larry Grimes, president of the Maryland-based W.B. Grimes & Company, said it appears the Times may have even had potential buyers in mind when asking for the cuts.

"I just think there's been a scenario put forth to the Times. 'Under these circumstances, we'll buy the paper. Meet these conditions,' " said Grimes, whose company has overseen the sale of 1,400 publications since 1959. "And it looks like that's what they're trying to do."