US job losses slowed in May 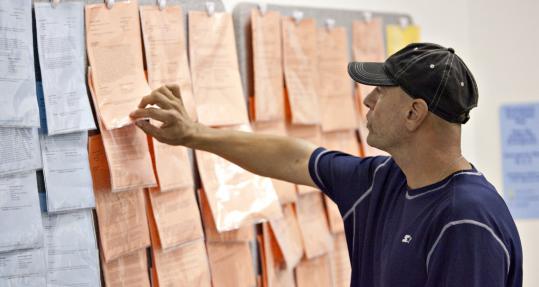 The US economy shed another 345,000 jobs in May as the unemployment rate surged to 9.4 percent, but the losses were far smaller than economists expected, amplifying hopes of recovery.

"It supports the idea that before the end of the year and maybe even by late summer we could be at flat employment," meaning no more net job losses, said Alan D. Levenson, chief economist at T. Rowe Price in Baltimore. "During the course of next year, we'll probably start to feel better."

Wall Street saw some fresh signs of potential revival in the better-than-expected report from the Labor Department yesterday, and stocks moved moderately higher after some hesitation, only to retreat a bit in the afternoon.

But many analysts emphasized that the marked slowdown in the pace of job market deterioration - while positive - did not alter the reality that the economy remained very weak, with grave challenges still bearing down on millions of households and businesses.

"These are still terrible numbers," said Ian Shepherdson, chief US economist at High Frequency Economics. "We're a million miles away from a recovery."

Rather than a sign of renewed vigor, the latest monthly snapshot of the job market suggests the end of the acute panic suffered last fall, when the investment bank Lehman Brothers collapsed and credit froze throughout much of the economy.

"That wild disgorging of inventories and workers that we saw in the aftermath of Lehman, what you're seeing is the reversal of that dynamic," said Robert Barbera, chief economist at the research and trading firm ITG. "You had companies throughout the world that suddenly had serious concerns about access to capital and they slashed spending and cut workers well beyond any connection to demand. There's now a better tone to the data."

But conspicuously absent, Barbera said, was any sign of a fresh engine for economic growth. Although home prices appear to have hit bottom in some areas of the country, construction remains weak. The auto industry and retailing remain mired in distress. The job market is likely to remain in the doldrums for many months, he said.

For more than a decade, economic growth and attendant American job opportunities were fueled by swelling wealth and liberal access to credit. As home prices soared, homeowners availed themselves of myriad forms of credit that turned increased real estate values into cash. They sprinkled this money on an array of industries, generating jobs from auto factories and lumber mills to construction companies and restaurants.

Now, as paychecks disappear, consumers are increasingly inclined to save - a source of broad grief in a country in which consumer spending makes up roughly 70 percent of economic activity.

"It's welcome news that payrolls are declining more in line with other recessions, but we need consumption," said Lawrence Mishel, president of the labor-oriented Economic Policy Institute in Washington. "People are not going to be moving forward based on housing wealth, and they're not going to be taking on debt. They've got to get wage growth."

Indeed, wage growth has been stagnating even as gasoline and medical costs rise, putting pressure on household finances. Wages were 3.1 percent higher in May than a year ago, but that growth slowed drastically this year. In April and May, average hourly wages grew just 0.1 percent, to a seasonally adjusted $18.54, from $18.52, according to the Labor Department. Wages for manufacturing workers fell 0.1 percent.

The jobs report presented a statistical puzzle. On the one hand, the net decline in jobs was much smaller than expected and the lowest figure since September. The economy lost an average of more than 700,000 jobs a month during the first three months of the year. The pace of losses eased to a revised 504,000 in April and then fell more in May, a welcome sign of improvement.

At the same time, the unemployment rate leapt to its highest rate in more than a quarter-century, reinforcing fears that joblessness will probably reach double digits.