New life for an old farm

Elsie the Cow once promoted Elm Hill, but the Brookfield nonprofit now aids the disabled 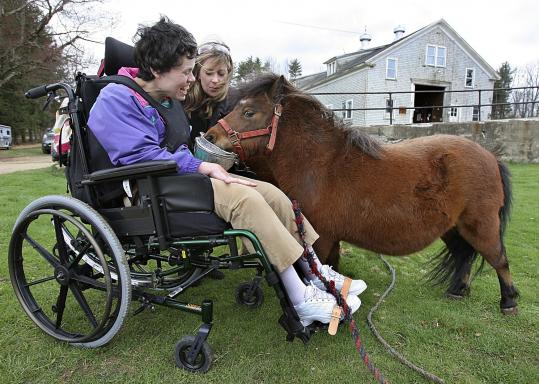 Chickens, horses, and goats still roam Elm Hill Farm in Brookfield, but the level of activity is a far cry from a generation ago, when it was a working farm and home to one of the most famous "spokes-animals" in marketing history.

Elsie the Cow, who pitched Borden Dairy products in the 1930s and 1940s and was more recognizable than some human celebrities of the time, was born and spent most of her life at Elm Hill Farm. Indeed, her presence is still felt: Type "Brookfield, Mass." in an Internet search engine and most results will make reference to Elsie. You can also wander into the back corner of a dusty barn at Elm Hill and see the stuffed head of Elsie's father hanging on the wall.

But like a lot of other New England farms, Elm Hill is no longer in full operation, and times are tight. A large tract of land has been donated to the Audubon Society, and another piece of the property was recently sold. The farm survives by boarding horses and offering community programs as a nonprofit foundation.

The foundation's mission "matched our mission," said Bonnie Keefe-Layden, chief executive of Rehabilitative Resources. "There is the opportunity to explore alternative methods to fund ourselves and add services."

The recession is forcing more nonprofits to think creatively and strike unlikely partnerships. Government grants are drying up as state and local budgets tighten.

In addition, a March survey by Cygnus Applied Research found that nearly half of donors said they were uncertain if they would be able to give at the same levels this year as they did in 2008, or were planning to give less.

"A lot of us think the worst has not yet hit," said Theresa M. Ellis, founder and managing director of Common Impact, a nonprofit in Cambridge that works with more than 300 other nonprofits to match them with corporate partners. "The shock that is kind of working its way through the private sector is going to take longer to work through the nonprofit world. I personally think it's not going to be until the year after next before we start to see a recovery."

Keefe-Layden said she is confident in her agency's ability to weather the recession, if only because it has adapted to funding cuts before. The state has not granted cost-of-living increases for Rehabilitative Resources clients in 21 years, so the organization has looked elsewhere. Keefe-Layden said her group increased revenues by offering training to nonprofits that work in similar fields, and by selling some materials to other healthcare facilities, such as a register to record when medication is given to patients.

"The whole point of all this is so we can maintain the quality of care for our clients," she said.

The farm's history shows how its alliance with Rehabilitative Resources came to be.

It was started in the 1700s by ancestors of Blanchard Means, who died in 1973. He and his wife, Louise, who died this year, had a developmentally disabled daughter who uses Rehabilitative Resources.

The farm also allows autistic children to interact with animals; already, a wheelchair ramp to a riding ring has been built to help people with disabilities take part in horseback-riding lessons.

In addition, the facilities can be rented out or used to host fund-raisers for the agency.

But not all nonprofits are expected to fare so well. The number of nonprofits continues to grow at a time when philanthropic giving has been flat. Jeffrey Vengrow of the Center for Nonprofit Excellence in Akron, Ohio, which provides management support for nonprofits, sees a "Darwinian pattern emerging."

Some groups, Vengrow said, will be successful in setting up partnerships and diversifying services, but others will ultimately succumb to the recession.

"The tools that are available in the for-profit sector need to be adapted to fit the environment of a nonprofit if they are to become useful," Vengrow said.

"So even if organizations copy from the for-profit sector," Vengrow said, "they might be led astray, lose sight of their social purpose, and fail to fulfill their mission."