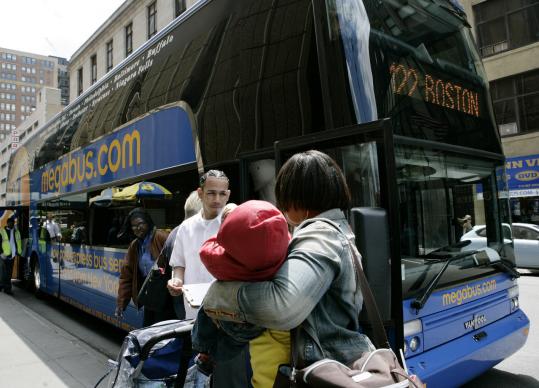 Starting today, Megabus plans to switch all 13 buses it uses on the Boston-to-New York route to double-deckers. (Jennifer Taylor for The Boston Globe)
By Katie Johnston Chase Globe Staff / May 13, 2009
Text size – +

Megabus, which offers free wireless Internet access and seats for as low as $1, is rolling out something new along the ultracompetitive Boston-to-New York route: double-decker buses.

Starting today, the company plans to switch all its buses on the route to double-deckers - 13 in all. They're not your typical open-air tour buses packed with sightseers. They seat 81 passengers - 25 more than a regular coach - and they're loaded with amenities that include Wi-Fi access, electronic outlets, and TVs. Some of the newer buses traveling to and from Boston will also have a 51-inch-wide glass ceiling.

The new double-deckers are only 18 inches taller than a regular bus, but this height difference means they can't maneuver inside South Station, where Megabus.com has been based for nearly a year, so the double-deckers will operate out of Back Bay Station. The 13-foot-1-inch buses drop off passengers at Penn Station in New York.

Double-deckers are common in Europe, but Megabus.com, a subsidiary of Coach USA, is the only North American company using them for city-to-city travel, said Dale Moser, chief operating officer. Megabus plans to convert its entire fleet, built by the Belgian company Van Hool, to double-deckers by September.

"It becomes a much more environmentally friendly vehicle," said Moser, who added the double-decker buses are four times more efficient than standard buses.

The buses can also be exciting for passengers, said New York University graduate student Denise Birkhofer, who rode a double-decker Megabus on the way back from a trip to Philadelphia to visit art museums last month. It sounded fun, she said, "like having a little piece of London." She sat on the top floor, and she wasn't disappointed.

Not only was it comfortable, but because of the big window in front, she said, "It was kind of like being on a roller coaster."

In Boston, the double-deckers will keep the same schedule, departing from Boston 11 times a day, increasing the capacity of the already well-served route by 275 people a day. The double-deckers leaving from Boston will have the same price structure as the standard Megabus.com coaches have - the prices, which currently range between $1 and $18 one-way, go up as the buses fill up closer to the departure date. As of yesterday afternoon, Boston passengers could book a next-day round-trip ticket from Boston to New York for as little as $15.50. Friday and Saturday trips could be purchased for as little as $28.50.

The rollout of the double-deckers will help meet the growing demand for bus travel in the down economy. Buses are particularly popular on short-haul routes such as Boston-New York, which caters to both business travelers and students.

Megabus.com, which serves 13 cities in the Northeast and 17 in the Midwest, has nearly doubled its riders each year, according to Moser.

"I don't think we've even come close to tapping out the market," he said.

The high-tech access and other amenities on these discount buses may have other low-fare carriers like Chinatown bus operators Fung Wah and Lucky Star feeling the pinch, said Joseph P. Schwieterman, a DePaul University professor who has studied the intercity bus business. Lucky Star, for one, also offers $1 seats on its buses.

"Customers no longer need to settle for an obscure operator to travel cheap," Schwieterman said.

"Wireless Internet has given new operators respectability among business clientele as well."